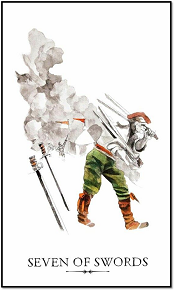 I. Keyword by Seven of Swords Linestrider

The Seven of Swords Linestrider Tarot often appears when the querent or someone in their life is trying to run away from something. This card also carries a factor of stealth or the trickery and evasion of duty or responsibility. It is drawn as a column of smoke rising from the camp, a sign of the cost of duplicity, the burning of bridges, or the ending of relationships.

III. Seven of Swords Linestrider in a Tarot spread

In a Tarot spread about relationships and sentiments, the Seven of Swords Linestrider Tarot can indicate dishonesty or infidelity. Are you having problems or are you lying about something that is undermining the foundations of your relationship? Is it possible that your partner is cheating on you? In a spread regarding work, this card can show that you are not completely upfront or honest about something and that your behavior is becoming a danger. It can also be that someone is talking bad about you behind your back or trying to get a credit that isn’t theirs. Be cautious if this card appears together with the Moon – there is something going on behind the scenes and either you will be the messenger or you are being deceived. If you ask the card for advice on how to deal with a situation or problem, perhaps you should try to be a little sneaky and stealthy in your approach.

When in reverse, the Seven of Swords Linestrider Tarot has a slightly different meaning. It may indicate that you are having a hard time getting out of a situation that is no longer going well for you. Perhaps you feel burdened with responsibilities, unable to let go of troubles from the past, or fearful of things that seem unbearable. This card may be asking you to let go of all your baggage, old swords that are no longer usable for combat and try to face the future bravely. Be careful if you are behaving dishonestly; This card can warn you that you are about to be exposed.

The Seven of Swords Linestrider Tarot in reverse reminds us that “sin won’t do you any good”, and it never will. If you receive this card in a situation where you are about to commit an act of deception or fraud in some way, it is a clear statement you will be detected. Think carefully. And if you’ve noticed that someone in your life is cheating on you, then there’s nothing as simple as ignoring that person. This does not mean that you need to assume or imagine that someone is cheating on you; The card only implies the above if you know it’s really the case.

This is the time to think thoroughly about how things “will be done,” and whether or not you will meet those requirements. This may be a time to streamline your actions. Take it one step at a time and don’t try to do everything at once. Deep down, you already know what’s most important to change.

The main ideas of the card are reversed circumstances, negative changes, imperfect plans, or slanderous situations.

In terms of work, the Seven of Swords Linestrider Tarot implies that the plan is not fully achieved. This is a sign that your plans cannot be fulfilled. The plans, if any, will also be partially turned upside down and may not end perfectly. However, the card also indicates that you will succeed, but to a lesser extent than intended. So, don’t worry too much, just be comfortable with the results you achieve. You should also be careful with cases of being blamed at work.

In terms of finance, the card foretells the lack of old debts or the unexpected insecurity of money. If you have a loan amount and come up with an appointment to collect interest or payback, you may not be lucky enough to get it all. If it’s a profitable investment, you’ll have to wait longer to get your share back. You should prepare yourself for the necessary things to buy, and the things you can buy later to balance the money at this time.

In terms of friends and colleagues, the Seven of Swords Linestrider Tarot warns you to be very careful. You may encounter many misunderstandings or slander by those around you. Friends or colleagues can be a direct or indirect cause of these problems. You should be careful in words and actions to minimize misunderstanding or aggression because it will cause adverse circumstances for you. On the other hand, the card also shows that some of your close friends will advise and guide you out of these problems.

If you are in a committed relationship when this card appears, the message is very clear that trust is extremely important. If you feel suspicious for some reason about your partner, talk about it even if it’s difficult. Passive attacks will only make things worse. If you are looking for love, you will have a chance to meet someone very interesting at this time, but do not try to avoid it even if you are not interested in a relationship. A potential lover will gradually progress to being a more committed lover to you. Try to keep things in balance.

In terms of family and loved ones, the Seven of Swords Linestrider Tarot indicates issues that may be affected indirectly by money or friends issues. The problem of lack of money can affect spending plans for the family. You can postpone those expenses until it is proper, but it will certainly cause some disruption to work and family life. The card also notes that you can find a good counselor in the family.

Be wary of influencers or religious or spiritual leaders who want you to spend money for so-called “enlightenment”. The truth is that you don’t need a spiritual leader to learn and grow. Do a self-examination instead. Besides, you should also be concerned with people you have just met with similar spiritual thoughts.

This card sometimes represents the style of “lone wolf” – the desire to fly freely alone. In the movie, the lone hero always acts completely on his own. He explores, investigates, and solves problems with his own intelligence and resources. He believes he will succeed because he ignores the clumsy efforts of other ordinary people.

In a Tarot spread, the Seven of Swords Linestrider Tarot can be a sign that you or someone else wants to be a lone wolf. You feel that you will be more efficient and comfortable by being active on your own. This method is useful when you need to avoid a group that is underperforming or you want to be assertive about your independence, but on the other hand, this idea can also cause trouble. We cannot be happy and thrive in the long run without collaborating with others. If you feel inclined to act alone, make sure this separation really works for you.

Sometimes the Seven of Swords Linestrider Tarot implies that you are running away from something – commitments, responsibilities, hard work, or affection. You may be procrastinating, letting problems slip away because you don’t want to deal with them. At times, we have to face what needs to be faced. This card is a message to you that you may be making things worse for yourself and others by running away.

This card can also imply a secret dishonor – a choice you or someone else has made that really isn’t fair. We all have bad choices that we want to keep concealed. Some of these mistakes are minor, but others can be more serious. Your inner voice will let you know when this happens. When you see this card in a spread, think carefully about what you are doing because this kind of loss of honor will eat away at your joy and self-esteem.

The Seven of Swords Linestrider Tarot can mean that you are treating someone disrespectfully. Sometimes the card can imply curiosity about the life of someone you are not related to. If you find that someone is curious about you, then you probably feel right. And if you’re feeling the urge to “dig up” someone else’s life (unless your little one makes you anxious and wants to take control of their life), then try to resist this urge. Everyone has the right to privacy.

If you’re involved in some kind of conflict this month, you’ll need to watch out for dirty play. This conflict can apply to a very wide range from cheating in a card game to someone trying to settle something dead serious in your business. What’s important is that basically, to cover your tracks, you need to make sure you’re doing things in a dignified and public way. Then you don’t have to worry anymore, even if someone blames you.

(Note: This illustration was inspired by the pirates in the illustrated version of Treasure Island by N. C. Wyeth)