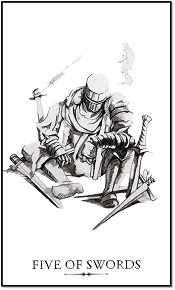 I. Keyword by Five of Swords Linestrider

The Five of Swords Linestrider Tarot is a complex card that indicates tensions, conflicts, and interpersonal difficulties. The card shows a warrior who has conquered and disarmed the enemy. He was keeping the swords of his enemies around him, but his feelings were not those of a victor. Sometimes this card shows an empty sense of victory. You may have won an argument or conflict, but the battle has taken away more than you realize. Often this card will appear when you are in danger of angering your friends, loved ones, or colleagues with your rigidity or your desire to “be the right person” rather than your willingness to find the best solution for everyone.

This is the only card that the author doesn’t paint in other colors. According to him, this card often speaks of a black-and-white thinking style, lack of flexibility, and it can make a person difficult to work with or to cooperate with.

III. Five of Swords Linestrider in a Tarot spread

In a Tarot spread, the Five of Swords Linestrider Tarot can show the damage you inflict on others while you are on your way to victory, this is especially true if it is accompanied by the Chariot. It can also talk about feeling defeated. Have you recently felt like you’ve failed at something? This card may want you to look around, find weapons that you have not lost. Stand up, pick a sword, and fight to advance. When in the past position, this card can show that you have acted in a selfish or irritable way in the past, and those actions are affecting the current situation. Maybe you have some resentment or trust issues with important people in your life and you need to work them out. Ask yourself if anything needs to be changed.

The Five of Swords Linestrider Tarot is quite negative in the present position and it wants you to face the selfish and hurtful behavior you are having. Many Tarot readers have a hard time identifying someone when this card appears, but deep in your heart, you should know that some of the things you do are having a negative impact on others. It can also appear when you are ready to end a fight. Perhaps you have realized that fighting has taken too much of you and now it’s time to move on with your life. Let go and forgive, or at least put things aside and focus on what’s to come. There are times when this card shows conflicts that you want to leave behind but they keep following you – for example, a troubled ex is still giving you a hard time, or bad financial situations are taking a toll on your current and future plans.

In terms of work, Although it is not clear what the problem you are facing, the state of your work is extremely depressing. You may feel like everything is abandoning you. If the company’s business is in a bad state, then this card shows that it can be worse. Many cards refer to the difficulty of work but often on the material side, the Five of Swords Linestrider Tarot is especially for the spiritual side. It represents a failure in the will, thoughts, and ideals to fight. In the case of a company that is on the verge of collapse, it shows signs of wanting to settle down and losing enthusiasm. What should be done is to be prepared to face these problems, a soft skills training course on being proactive at work is also considered a good idea.

In terms of finance, the card represents an average money source. You’re not too needy yet don’t have too much money to spend. It shows disorientation in investing. Your current job only brings a little amount of money to which you are also committed. Ideals and depression compete with each other in your spirit. The advice is to stay awake and remember what makes you happy.

In terms of friends and associates, the Five of Swords Linestrider Tarot shows no signs of luck. The card shows betrayal, maybe the abandonment of friends. You are losing the most granted people. The card also refers to the loss of friends and colleagues in the sense of death. The advice is that if you’re having an insane goal, then it’s going to be hard for anyone to take the risk to get along with you. That doesn’t mean they’re not your friends anymore. Betrayal is not a major phenomenon in this card, but it’s not a long way from giving up trust to betraying. Be careful!

Unfortunately, when the Five of Swords Linestrider Tarot appears in a spread related to love, it means that conflict in your relationship is an almost certain prospect. Things may not work out as you expect. Think calmly and carefully about what is causing the breakdown in this relationship. Be honest with yourself first, then be honest with the person you love. Learn to accept reality.

In terms of family and loved ones, the card mainly deals with the elders of the family rather than all family members. The head of the family (both men and women) is affected by this card. It shows that distrust is at its peak, and you will soon lose the support you need. You should be mentally prepared for this. What you need to do is re-evaluate why people’s trust in you has been lost. Re-strengthen it and everything will be fine.

Even if you suddenly find the answers to the mental problems you’ve been searching for, remember that they are answers for you and no one else. You don’t have to try to convert anyone else to your way of thinking. The Five of Swords Linestrider Tarot can also imply a break in the spiritual aspect that is no longer working for you. Give yourself time and space to find new answers.

The Five of Swords Linestrider Tarot is a card about personal gain. Society gives us the idea that we must think for others, but we resist that idea. How can we ignore our concerns while still living and existing? This dilemma in thinking comes from our definition of the self. If we consider our ego to be like our personality or body, then our interests become factors related to our own ego. Do you have enough food? Are you happy? Do you have everything you want or not?

We can extend our interest to the people or things we love, but how can we stop there? We are connected to each other in the long run. But in reality, our ego is the world. What we do to the world we do to ourselves. This understanding is very basic, but the crazy fact is that we easily forget them every day.

In a Tarot spread, the Five of Swords Linestrider Tarot can imply that you or someone else is letting go of a larger perspective, a view of the self. You are defining your interests too narrowly. If you keep trying to do things alone, your actions will come back to haunt you later, one way or another. Sometimes, this card implies a need to put our concerns first. If you are being abused or taken advantage of, you must find a way to free yourself. If you are tired of needs, take good care of yourself. If it’s your turn to act, then step up and demand fairness. Realize that if you hurt others in any way, your victory won’t be perfect.

The Five of Swords Linestrider Tarot also represents opposition – which can be as simple as an argument to as serious as a war. When the strings that connect us are broken, we experience discord. This card can imply that the loss of honor is quite large: scams, lies, cheats, tricks, even crimes. You can be the one who suffers from the above or the culprit that causes them. Either way, keep a broader perspective of who you are. Let’s go find the best solution for everyone, including yourself.

When this card appears, you may find yourself experiencing some mixed feelings about life in general and about certain people in particular. Don’t ignore these things, but don’t feel like you have to say word by word what you’re thinking or feeling, because if you do, you could ruin what you worked so hard for such as intimate and strong relationships with friends and loved ones. Think twice before you actually talk or confide in someone, even if you feel like it’s the person you should be talking to. Scan and consider carefully.

Overall, the Five of Swords Linestrider Tarot can imply that someone you care about may be leaving you for a while. If that’s the case, don’t act like you want to hold on to that person at all costs. Think that he/she/they will come back to you. It can also imply conflicts, both external and internal. Do not unnecessarily escalate existing conflicts. Think before you act.

(Note: The figure in this card is inspired by the Heide Knight from Dark Souls 2)