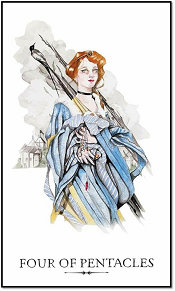 I. Keyword by Four of Pentacles Linestrider

The Four of Pentacles Linestrider Tarot depicts a character holding onto her possessions. The card shows the process of accumulation and the fruits of wealth but also warns about stinginess and materialism. The character in the card is embracing her wealth but is ostracized from her village behind; She was blocked off by her own possessions and isolated from the community.

The Four of Pentacles is both positive and negative. Like most of the other Pentacle cards, this card speaks of wealth and prosperity, but it also warns of adverse effects and alienates you from focusing on material things. This card is a good omen for those who seek success and wealth but beware of the double-edged sword of success.

III. Four of Pentacles Linestrider in a Tarot spread

In a Tarot spread, if you see the Four of Pentacles Linestrider Tarot in conjunction with the Hermit, your stinginess or miserliness may be keeping others away from you. When combined with Judgment, your current financial situation is tied up with important decisions. For example, you might think you’re just buying (or moving into) a home, but the consequences of this purchase can impact your life in the most fundamental ways and can change your journey at the same time. Take a closer look at your current trades relative to their immediate effects. The Four of Pentacles combined with the Chariot can bring trouble. The urge to rush towards your financial goals can turn your Chariot towards loneliness and pain. The appearance of Chariot with this card also emphasizes that maybe in the eyes of others you are becoming stingy, greedy, selfish. There may be things you need to do to re-establish a good relationship with your family or community.

Four coins of this card: one is on the woman’s crown, the other three are in her grasp. The look on her face seemed to indicate that this was all she had. The village behind her represents energy, thought, protection, and inheritance.

In terms of work, the Four of Pentacles Linestrider Tarot shows that you have achieved some results in your work, but complacency has caused you to miss opportunities for further growth. Attachment to the old and not changing to the times will cause you to gradually be eliminated. You should have a change, transform yourself, avoid separation from the general trend. At the same time, the card reminds you that you will have problems with competitors in the same field, so you need to be decisive to avoid losing opportunities.

In terms of finance, the card shows stability and abundant income. At first glance, this may seem like a good sign, but in the long run, this source of money is restrained and cannot bring more. This card advises you to be clever in letting your cash flow. On the other hand, the card also refers to assets inherited from distant relatives in the family. Sometimes, it also refers to the obsession with money in people’s minds.

In terms of friends and associates, the Four of Pentacles Linestrider Tarot does not bring good omens. You often try to cling to old relationships and shy away from other people, which causes others to hold a grudge against you. On the other hand, stubbornness will push you to cold wars and cause your relationships to crack. A silence to get to the root of the problem is essential at this moment. With colleagues, share your success with those around you and help everyone to progress together, this will help you in the future.

The Four of Pentacles Linestrider Tarot is a card of fear, hesitation and these feelings are basically related to love. It could be that you or your partner are trying to “control” the other too much, or it could be that someone else is trying to control you (in emotional matters). This control or excessive attachment is very bad because, in true love, every couple must always give each other enough space, and one is never allowed to “control” the other no matter what. If you’re still single and think you’re ready for a serious relationship, then identify with the mindset that you need to step out of your “comfort zone” in order to be fully engaged with your surroundings. Be more proactive on your journey to find true love.

In terms of family and loved ones, the Four of Pentacles Linestrider Tarot describes the separation between family members due to conflict of ideas. The domineering, stubbornness of the head of the family will negatively affect the younger members. A worst-case scenario is a separation from family or self-isolation. But it is important to have a frank and honest conversation to resolve conflicts. It is not wise to deliberately avoid or engage in heated arguments. Besides, the card refers to gifts brought by your distant relatives.

This is the time to take a serious look at yourself about what you are worried about, afraid of, or clinging to. “Not getting involved” is also a form of liberation. Learn about the energy organs in the human body, reflect and meditate on how those organs in your body are working. Be open to change, because change is always happening. Let’s start from where you are.

In general, the positive aspects of this card are less mentioned than the negative aspects. When in the reversed position, the Four of Pentacles Linestrider Tarot speaks of stinginess and miserliness, negative material tendencies, and an obsession with poverty that are hindering your progress. You are reluctant to spend money or spend too much to fight your fear of poverty. Either way, you need to take better control of your finances, to honestly evaluate what you have, to learn to let go of fears, anxieties, stinginess, and to see wealth is only one aspect of healthy living.

This reversed card usually implies that you are trying to hold back restraint on too many things, people, money, circumstances, etc., more than is necessary for you to have a good life and mood. This is when you should consider relaxing your mind and remember that you cannot control what others are doing or holding. We all have free will. Just focus on your own choices. The reversed Four of Pentacles Linestrider Tarot is a prediction that the reader will suddenly move from a period of control and fear and anxiety to a stage of being more open-minded and more aware of the fact that fear solves nothing. Maintaining a positive mindset will bring you many benefits.

IV. Message of Four of Pentacles of Swords Linestrider

Spend some time playing with a 2-year-old, and you’ll quickly hear messages from the Four of Pentacles Linestrider Tarot like “No!” or “Mine!” It is a scream from the ego that is developed in childhood. The ego wants to secure its power through the imposition of its will. The desire to stay in control is the hallmark of the Four of Pentacles.

Some form of control is sometimes necessary. In turbulent times, a firm hand is a prerequisite for creating a new structure, regime, and enduring organization. But many times, the will to dominate is out of control, stifling both the creativity and personal expression. In a Tarot spread, this card asks you to carefully consider the degree of control in the current situation.

The Four of Pentacles Linestrider Tarot can represent matters related to sovereignty and ownership. You may be in a relationship with the receipt or holding of money or some other property. Maybe you’re having trouble with ownership or are feeling jealous when someone else has something you don’t have. Rely on the energy of this card for maintenance and defense, instead of making complaints. Everyone needs the freedom to define their own life.

This card also implies that changes are prevented. Opposition can come from people who just want to maintain the status quo, or from within themselves. Are you trying to avoid changes when they are necessary? We often just stick to the familiar even when we know it’s not the best option. The lesson that the Four of Pentacles Linestrider Tarot teaches here is the need to realize that maintaining control is impossible. We live in this world like a lone person in the vast ocean. Who can manage or possess the power of control? The only way to not sink is to stand up for yourself, ride the waves, or in other words, follow the natural changes and developments. The ocean will always be your ally as long as you swim with the current instead of standing still and sinking.

This can be a card that represents the will to keep things, people, money, or circumstances intact for longer than is actually necessary. When this card appears in a spread, it is a sure sign that you need to be very careful to consider whether you are constantly clinging to something, or if you are “sticking” on something unhealthy. Overall, the Four of Pentacles Linestrider Tarot can be a sign that the querent is having anxieties/fears about money and/or is involved in something that makes them feel insecure. The key point to realize in this case is that anxiety and fear do not give you security. If there’s a card in your spread that reminds you of the old saying “If you love someone, let him or her be free”, then that’s exactly what you should do: forget about your fears and worries.