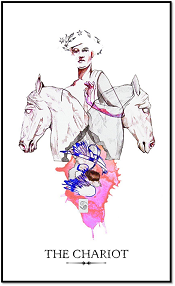 I. Keyword by The Chariot Linestrider

II. Meaning of The Chariot Linestrider

The Chariot Linestrider does not hold the reins, the horses are not bound, they are oriented through willpower and balance. Chariot represents a struggle – from within and outward – and to win with will power and discipline. You need to be calm, disciplined, and in control of your passions and intellect to be able to overcome the limitations and difficulties of recent times. This is a powerful emblematic and motivational card of victory, will, and sacrifice.

The square below the painting symbolizes the ground, a sign of willpower; Inside is the symbol of Cancer – the zodiac associated with Chariot Linestrider. The star crown and laurel wreath show the evolution and attainment of achievements. This is a fully developed character. The horses representing two opposing directions are fused by the Chariot.

III. The Chariot in a Tarot spread

In a Tarot spread, if the Chariot Linestrider shows up in the current position, the message will talk about finding your goals and moving towards the things you want to achieve in life. You may experience glory or reach your goals. However, this card will manifest in the most powerful way in the future position. You are going straight to victory, coordinating your strengths and controlling your motivation. If the Star also appears in the spread or there is the Wheel of Fortune in the upright position, you are in a golden moment: everything is in your favor and you should take advantage of these conditions to gain personal triumph. When combined with Pentacles cards, the victory you will be looking for will mostly be in the financial sector.

The Chariot Linestrider shows a strong will, personality, and determination. When in the reversed position, it warns of a narrow goal and vision that will cause you to sacrifice long-standing goodness to achieve it. Think carefully about what you are after and whether it will bring you and the world the better. In the picture, an abstract image of a pigeon is drawn upside down and outlined. This symbol is a warning – your nature, courtesy, and compassion may need to be subdued in order for you to achieve your goals. Winning often comes at a cost. So be mindful!

In terms of work, if you start a business, the card suggests that you will have a hard time at first, but someone in a higher position will help you. This help is like one wheel of the chariot and your effort is the other, without one of the two, it is difficult for the carriage to operate. If you are working, it is important not to let the little things influence your decisions. Chances are, you will run into some hidden opposers or troublemakers. Don’t let these demoralize you, the Chariot Linestrider recommends that you just need to focus on your work because they are not the ones judging you. Success is the sweetest revenge. If you start a new project, the workload will be pretty messy, but it’s all under your control.

On the financial side, the troubles will be solved smoothly. However, you need to control and balance your finances and avoid overspending. If you want to get a loan to start your own business, now is a good time. If your friends want to borrow money, you should control the loan amount to a certain level that they can afford. On the other hand, the Chariot Linestrider also encourages you, instead of spending freely, you should accumulate to reward yourself with a trip abroad or go to the wilderness to balance yourself in the endless circle of life.

As for friends, the card warns you of the too big ego. It can lead to undesirable problems in relationships. Being stubborn as well as not knowing your way of expressing hurts your friend. The advice for you is not to argue when you are angry and not to save up on apologizing if you are not right. In terms of co-workers, there will be many things out of your control. And you don’t need those trifles. If your colleague does make a mistake, give your feedback in a gentle and constructive manner. Outright criticism can easily hurt others and is less efficient. However, if this does not work, you should let your supervisor intervene.

Regarding family matters, if you are having problems, family members will help you as well as give you advice. The Chariot Linestrider also alludes to the possible displacement or travel of you or a family member. In the case that you are separated and away from your family, the card also reminds you that you have many places to wander in the world, but there is only one place called the family to return to. Whether you come back with glory or just empty-handed, your family still shields you from tough times. Your family may not understand you, but they always love you.

IV. Message of The Chariot Linestrider

The Chariot implies something more than a glorious victory. Holding the reins of horses requires absolute control that represents strong will. Plato in Phaedrus mentions that the mind resembles a chariot pulled by a pair of black and white horses – the same image of Tarot.

A specific Hindu myth told that the goddess Shiva destroyed a third of the city of demons. The gods forged the chariot for Shiva not only with divine power, but even “extracted” the materials of heaven as well as those of Mother Earth. The moon and the sun became the wheel and the wind became the horse. Through images of mythology, we know that we overcame the evil spirit of mind when we can focus all of nature, even the unconscious energy hidden in Shiva emanates through the initiative will.

The story of Shiva is a true victory when the spirit finds the target to unleash its full power. But Phaedrus is about the victory of the “ego” – which controls rather than resolves conflicts in life. Tarot interpreters who consider cards in the form of separate images tend to spread the meaning of The Chariot. They point out that the name in Qabalah gives the number 7 with all its mystical meanings – Victory.

When we look at the cards sequentially, we see that the number 7 is only the winner of the first line of Main Arcana. It shows the state of attaining maturity, but it basically leaves nothing to the larger unconscious and super-unconscious. According to this interpretation, when it comes to the Chariot, we have developed the “ego”; The first lessons of reality are gone; The rebellious period of self-seeking is over, now we enter adult life, succeed in life, admired by people, confident and self-satisfied, have the ability to control emotions, and above all, direct will.

With an image of the spirit of conquering and controlling the forces of life, the Chariot is a perfect symbol of civilization, creating laws from chaotic nature, using the natural world as raw materials for cultural and urban construction. One of the key ideas of Qabalah broadened this view. By a connection to the word “Iain” of the Hebrew alphabet, the Chariot possesses the feature of “language”. Language has always been seen as the representation of wisdom and power that transcends nature. Until now we know that only human beings possess language and we can say that language keeps us separate from the animals.

The meaning of Chariot stems from its strong will. In spreading cards, it indicates that a person has successfully controlled the situation thanks to his/her tough personality. It also refers to a situation where many contradictions have not been reconciled but are merely placed within control. There is also no need to overdo the negative side of this card. When in the upright, the Chariot Linestrider basically means success – a personality at the center of the world. If it does appear as a result of an issue, victory is implied.

In the reversed position, the opposing sides of the card carry more intense power. The Chariot implies that the access to willpower was unsuccessful, and the matter went out of control. Unless the person finds another approach, he or she will face disaster. Willpower cannot be around us all the time. Like Oedipus, sometimes we have to learn how to go with the flow and let God take care of the rest.

Corresponding Associations of The Chariot Linestrider

The Chariot Shadowscapes Tarot represents the best things to come. You can reap the fruits after many years of planting seeds and freely enjoy the performance you have made so far.

The Archer Wildwood wears a simple talisman, present quietly but confidently and intentionally. The two giant hounds beside her are metaphorical images for the messages of strength she holds within her.