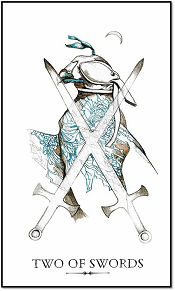 I. Keyword by Two of Swords Linestrider

The Two of Swords Linestrider Tarot is a card that shows difficult decisions. Usually, the card portrays a woman wearing a blindfold. The author chose the image of a hooded falcon which is a powerful and agile creature, however, it can’t do anything because it’s temporarily invisible. The figure wearing the blindfold may not want to “see” or admit the truth revealed or maybe try to delay the selection time. The blindfold can also mean that you don’t have the information you need to move forward.

Sometimes this card can show that someone is “holding you in the dark”. If you remove your blindfold and honestly face the facts, problems, and consequences of your actions, you will be in a better position to make the right choices.

III. Two of Swords Linestrider in a Tarot spread

If Two of Swords Linestrider Tarot appears in a Tarot spread, it’s time to evaluate and choose. Open your eyes and look honestly at your choices and problems, use your reason, and balance your losses and gains. Procrastinating and hesitating won’t make difficult decisions go away. It’s time to take responsibility, choose a path, and move on. This card calls for the mind and the power of reason, not the heart. You need to analyze the situation, sort out the pros and cons of the choices you are facing, and make a decision based on those facts. Lots of big decisions bring pain, sacrifice, and sadness. Now is not the time to lament your choices.

The two swords in balance in this card want you to cut to the marrow of the decisions you are confronting and approach them in the most realistic way. If there are two or three Court cards appearing together during the spread, you may find yourself facing a hostile or tense situation between two people close to you. The Cups also talk about relationships in your life and about troubles that may be brewing in that realm. When paired with Justice, there can be suspicions of dishonesty or betrayal. An honest assessment of the facts will put your mind at ease and help you move forward on your journey. The crescent moon in the painting promises a fresh start after difficult choices have been made.

In general, Two of Swords Linestrider Tarot in the upright position does not carry a happy or bright message, when in reverse, it shows falsehood, betrayal, or self-deception. It can also mean that you are stuck between two difficult choices. You don’t have enough data, you can’t see all aspects of the situation clearly, and you think that any action will lead to negative consequences. Maybe you need to get yourself out of this circumstance. Retreat and seek a higher mental base where you can remove your blindfold and get a clearer picture of what is going on. This card may also be warning you that you are being manipulated, that the facts are being concealed, and that someone is making it harder for you to make a rational conclusion. The moon in the painting alludes to an illusion.

In terms of work, the Three of Swords Linestrider shows that you may encounter many difficulties at work in the future. What you should do is stay calm and avoid being influenced by others. Because you yourself can handle them. This is not a good time to sign contracts. If you want to develop or start a project in a new field, you should seek advice from friends who have experience in this field. On the other hand, this is the time when you need to obey the law at work.

In terms of finance, you will find a solution soon if you are encountering troubles. The Three of Swords Linestrider signals about opportunities to bring a financial source for you. On the other hand, you need to carefully consider large expenditures and investments during this period. Because there are hidden difficulties that you still cannot foresee. At the same time, in financial transactions, you need to have confirmation documents to avoid unfortunate risks in the future.

In terms of friends and associates, the affection in your relationship is a deep one but you rarely show it; in times of trouble, you never abandon your friends. This sincere thing looks as clear as water but tastes like wine. Even there are times when you sacrifice your self-belief for your friends. In the matter of colleagues, this is the time when you need to be more open to get along and cooperate with each other. However, you should still be cautious because you are both an ally and an opponent on the same line.

In terms of family and loved ones, this is the time to avoid intense arguments and conflicts. At the same time, this is the time to let go of mistakes made by loved ones in the past. On the other hand, the pressure of parents on their children in choosing a future path will lead to depression and self-isolation of them from the surrounding life. According to some other beliefs, the Three of Swords Linestrider sometimes even refers to the lies and betrayal of relatives if it is in a bad position in the spread.

In terms of love, the Two of Swords Linestrider Tarot portends good omens, especially for an existing relationship. This card indicates that your relationship will become more stable and balanced, in which both of you will treat each other fairly. If you are looking for love, take a serious look at yourself and what emotions are out of your control that you need to deal with. People could predict the state of despair before it actually happened, and that was a crucial turning point. No one can make you perfect; instead, a mate just embellishes and decorates the cake of life that has been drawn by yourself. Don’t look outside of yourself when you want to find your own happiness. Once you understand and can apply that, the relationship you really want and need will come.

When the Two of Swords Linestrider Tarot appears in a spread related to the spiritual matter, it shows that you are on a more balanced and positive path than you think. Stick to what you believe in and how you see things, even if your standpoint or mental outlook doesn’t work for everyone.

The Two of Swords Linestrider Tarot is about the barriers we put on ourselves, separating ourselves from others, and even the barriers we create within ourselves. Inwardly, we stop our emotions and refuse to feel them. We avoid looking at the truth and pretending that everything is fine. We think this way but feel the other way. We try to maintain the status quo at all costs even though we know that we should have accepted and faced reality.

In a spread, the Two of Swords Linestrider Tarot often appears when you are not poised to accept certain truths about yourself or hide from the reality of the situation. What do you really feel? Are you fighting against soft feelings because you think you might get hurt? Are you angry even when you are smiling? What are you refusing to see? Notice the blindfold on the figure’s face in the card, he can’t see the truth or even realize the troubles he is facing.

The most common barrier for a person is a closed heart. When we cut off our emotional circuit, we have cut off the flow of love so that they can’t grow out anymore. Sometimes this action is necessary, but it always comes with a hefty price tag. Every time we close our hearts, we will always find it harder to open them again. The deadlock situation is another barrier between people. When two parties are tied in their positions which means separating from each other instead of understanding each other, it can be considered a deadlock situation. To break that situation, they must break out of their own protective walls and listen to each other. The message from the Two of Swords Linestrider Tarot is that barriers are not the answer. We must open our hearts if we are to seek peace and wholeness.

This is also a card about cooperation and balance. It usually refers to a “partnership” with another person rather than with a group of people. It represents a need to give and to receive (none of us is always right, and everyone can give something to some extent). Take a look and learn about the balance aspect of your life and your “partner”.

Overall, the Two of Swords Linestrider Tarot tells us that your relationships may not be good, whether it’s friendship, love, or business. However, you should consider your role in this relationship(s) equally, as well as think about whether you are being treated fairly by your partner(s). If not, it might be time to bring things back into balance. This will almost certainly require open communication from you. Nothing can be changed without effort.