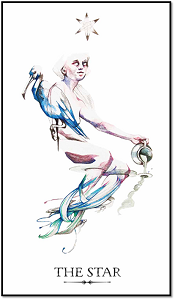 I. Keyword by The Star Linestrider

II. Meaning of The Star Linestrider

As one of the most amiable cards in the deck, the Star Linestrider often appears during times of personal transformation. She shows that this is the time for healing and positive transformation, the time to let go of anger, bitterness, and negativity. Let go and forget the old and embrace new opportunities. Star is often depicted as a woman with her upper body on the ground, representing common sense and power, but her lower body below the surface, representing intuition and spirituality.

In the drawing, the author made a slight change and drew her almost like a mermaid, her feet just thin fins in the swirling water. The bird depicted here is the sacred stork Ibis, representing the mind. Star’s zodiac sign is Aquarius.

If Temperance solemnly holds the two cups and water in a balanced manner, the virgin in the Star Linestrider holds a vase and pours the water freely. The bird sitting behind her is the stork, representing the god Thoth, the god of wisdom and magic. Thoth is a scribe, document editor in the underworld as well as recording the judgments at the Maat gate. Thoth played an important role in many ancient Egyptian mythologies as he held the position of arbiter between the forces of good and evil. The eight-pointed above her represents mental strength to accept mistakes and overcome suffering.

III. The Star Linestrider in a Tarot spread

When spreading the cards, you may encounter the Star Linestrider in association with Hermit; if so, the cards want to give you a period of rest and recovery in silence. Take time to meditate, reflect and be alone. The same is true for the Four of Swords: taking a break between battles, taking down your weapon temporarily, believing in the benevolent resources around you, and letting yourself be at peace for a while is not bad at all.

When combined with the Chariot or Magician, this is a good omen to accomplish your goals, get what you want, and cooperate with the world around you in the best way.

Even in the reversed position, this is still an elegant card. Sometimes, she appears to remind us of the hurt caused by hatred, anger, and negativity. She urges us to let go of them and instead, focus on growth, hope, and change.

In terms of work, if you are looking to start a business or start a job, then you should not be discouraged when experiencing early difficulties. Your effort will be well compensated. Sometimes, you will come across some unexpected help. If you feel depressed in your current job, this is the time when new opportunities will emerge. And you should prepare carefully to take it. Being confused and indecisive will make you miss out on great moments in your life. If you are starting a new project, you may encounter some unsatisfactory things at first, but it is important to keep up as these will quickly pass.

In terms of finance, the Star Linestrider is a good omen. If you are in a tough time, the card beacons the opportunities that will be presented to you. The advice for you is to stay calm to take this opportunity because, with a little mistake, you can also let it slip out of your hand. On the other hand, the card predicts a good time for investment and business expansion. However, you need to be able to control your finances skillfully, to avoid being out of balance. This is also a good time to start new projects or sign contracts.

In terms of friends and associates, the card alludes to the big ego in friendship. Maybe you or your friend who has a rather large ego wants to break all the rules and controls others. And this can lead to unnecessary conflicts in the friendship, causing both of you to feel frustrated and bothered. Friendship is a constructive process as well as proving to each other that you both deserve this love. Conflict is inevitable, but it is important to find the root of the problem to untie the knot. Friendship is the star in the sparkling galaxy, very close to us yet somewhat distant. It is only mutual compassion that holds us together. Regarding co-workers, sincere feelings will help you create a lot of sympathy with colleagues. However, you should also have a clear attitude toward colleagues who are against you as there are times when your tolerance becomes useless.

Regarding family issues and relatives, the Star Linestrider refers to frequent disputes between relatives. However, this is a debate on the nature of building things in a positive direction. On the other hand, the card talks about disagreements between you and your family regarding work, school, or career. You decide to follow your own path while your family will guide you on another. Although your family has always cared for you, you should be the leader of your life and take responsibility for your decisions. Be brave to continue your track.

IV. Message of The Star Linestrider

After the rain comes a rainbow. People who experience emotional ups and downs will then find a sense of calm and emptiness. The Star Card almost doesn’t need to be interpreted. Every image in the card signifies completeness, openness, and comfort.

It is very advisable to compare the Star with Temperance Linestrider because they appear similar images: a woman pouring water, two hands with two cups, one leg on the ground, and the other one is in the water. Both cards appear after the crisis, but while Temperance is under control, the Star is completely free, flexible, soft, and relaxed.

And finally, when Temperance pours water from one cup to another, blending and conserving, the virgin Star freely and confidently pours water in a belief that life will continuously provide her with new energy sources. Those miraculous cups never run out of water.

The energy released in the Tower tore through the curtain of Perception. By the Star, we are already standing behind that curtain. Though small, but also a symbol of the Unconscious; the same stream of water hidden behind a pair of columns in the High Priestess. Now the living energy of the universe has been stirred up through the act of pouring water into it.

The flowing water on the ground implies that the energy released from the Tower is being directed outward as well as inward; it connects the Unconscious with the external reality of the physical world. One way to describe the currents of water is mythological primordial specimens, through unconscious self-expression images.

The Unconscious is a synthesis, formless, undivided, but arose in awareness through different mythological lines. Up to the Star, we have gone beyond mythology to its original source in the formless energy; like light shining through the darkness. The darkness that turns into the light is the unconscious hidden in the vast space within us that transforms into the ecstatic realization of the superconscious.

A stream of water flowing back into the tank means that all true models revert to merging with formless truth. The value of the true pattern lies in the energy that awakens the inner ego and connects us to the source. The virgin’s feet do not penetrate water. The collective unconscious has not been entered, only stirred up.

The bird behind her is a crane breed, a symbol of the Egyptian god Thoth, the creator god of all kinds of arts, from poetry to handicrafts. Basically, Thoth teaches early life skills, but on a more symbolic level, we can say that all creative activities stem from the formless energy pool. We use this energy to create poetry, painting, and crafts that are the function of a living being. The flow of water in the card is a symbol of all human creations.

Each creative act builds up an objective view of the mental energy in what is created. At the same time, nothing can draw the artist’s inspiration as long as he/she stays connected to the inner source. Thus, a flow back into the tank, as every work brings new inspiration to the creator.

Carrying number 17, the Star surpassed number 7 and unleashed the living force directed and controlled by the Chariot. 1 plus 7 equals 8 – we see that Star is Strength on a new level, with the passionate lion not simply being tamed, but transformed into light and joy. The 8-pointed star in the card is a reference to Strength. This eight-pointed star can be shaped by placing one square staggered on another square, sometimes it is as an intermediate between the square and the circle. The square represents matter while the circle represents the spirit. The human race is the relationship between the spiritual world and the material world; we have both the ability to feel truth and action, which makes us the means through which truth reveals its nature.

The Church often describes human existence in intermediate form between an animal and an angel. Often, people give an ethical interpretation: one can listen to desires or obey reason. But we can use the above metaphor to say that human’s consciousness and actions connect the physical world with the “angels”.

Despite the fact that every inference is directed towards revelation, the Star is not really an action card, but rather an inner calm. In contrast to Temperance and the Moon, the Star does not refer to the way back from the lake to the mountains and hills in the real world. Although currents and the crane indicate creative energies, Star’s experience is a kind of peaceful one. The journey can wait in moments.

The predictive meaning in the Star Linestrider is hope, a feeling of complete and soothing, especially after emotional storms. The Star and Tower are very often reminiscent of each other even in cases where only one card appears. This 17th card indicates that the unconscious has been activated in a very peaceful way.

In reverse, we close ourselves from stillness and hope, and instead, we feel weak, uncertain, and afraid. Deep insecurity at times wears a mask of arrogance. If the upright Star suggests that man is the mediating object connecting the soul and the world, the Star Linestrider in reverse is a symbol of closed connection channels, and when the water of life only rises inward, the outside becomes weak and stagnant.

The Silence Osho Zen describes night sky is full of stars and a beautiful round moon reflected on the below misty lake. The face in the sky is immersed into a meditative state, as a goddess of the night sky showing depth, peace, and understanding.

The Pole Star Wildwood symbolizes universal law and sacred, powerful rituals. The first breath of creation has created the stars and tied them together forever in the universe.