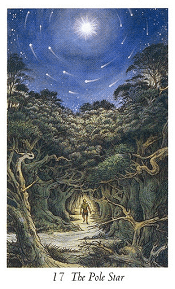 I. The position of The Pole Star Wildwood Tarot on the Wheel of the Year

The Pole Star is located at Imbolc point, 1st February. The card is linked to the new moon and the treasure of knowledge of the universe. The elements of this card are Earth and Air.

II. The Description of The Pole Star Wildwood Tarot

The pure white light of The Pole Star illuminates the dark space of the universe and reaches Earth. Stars represent powers in the farthest reaches of the cosmic sky, where the interaction and harmony of molecules create light and warmth. Stars rise, stimulating our curiosity to reach places far beyond the solar system and then embracing the timelessness of space. The dust clouds that make up the core of the stars are rotating in eternity, creating the circulation of the universe.

The blessings that The Pole Star bestows on Earth remind us that it is creativity that nourishes and unites the mighty warriors of the night sky in us. The latest research shows that stars were originally pointed to as a spherical mass of matter. The images symbolize them – round and cup shapes are engraved a lot on prehistoric rocks. They represent creative seeds. The world of stars engulfs the Earth in blessings, making human souls healed and reborn.

III. The Meaning of The Pole Star Wildwood Tarot

The Pole Star Wildwood symbolizes universal law and sacred, powerful rituals. The first breath of creation has created the stars and tied them together forever in the universe. Our star – the sun, is always shining as if to prove the wonderful power burning in the core of the star. While the sun is the defender of our real world, The Pole Star emphasizes a greater, more unseen power in the universe, which can balance and control tremendous gravity, light and the energy that makes up the star’s core; which weave delicate interactions between elementary molecules in the multidimensional world; which we can only assume about it.

For a long time, stars were discovered and studied as they passed through the sky. The Pole Star provides first-time travelers with constant direction, as the gravitational field has held it in a permanent position for thousands of centuries. From the foundation of astronomy, long-term mathematical calculations and time predictions have grown significantly. Research has shown that the pyramids all point towards Orion. The ancients also imagined mysterious monsters, gods, and historical symbols through sparkling stars in the night sky. Like the moon and the sun, the stars move around heaven in a steady, predictable cycle. Some stars disappear under the horizon during the summer and then reappear in the winter. Mysterious stories of hunters, death warriors are honored by the gods, then turned into stars in the night sky that have been passed down from generation to generation, then eventually turned into episodes of sacred practices.

IV. The guideline of The Pole Star Wildwood Tarot

The power of cosmic knowledge is the core here, whether individually or in circumstances that bring us profound changes and divine promises. The Pole Star is leading the way and inspires us to keep on the path through the forest. If you hold an ancient treasure of knowledge and its variants with certainty, you will not be able to go the wrong way; it’s there like a talisman, a symbol of the cosmic cycle. Whenever you feel lost in the dark maze of life, remember that The Pole Star is there to energize us.

V. Keywords and extensions of The Pole Star Wildwood Tarot

Treasure of knowledge of the universe, The star of fate, Conscious of the stars, The early morning star, Prophecy of innovation, Signs of a new era and new cycle, The sun is embedded in one’s memory.

The Star Deviant Moon Tarot is about reconnecting one’s soul with the divine – the transcendence of personality, family, community, and reputation. In the end, it has to do with being free to be ourselves.

The Star Linestrider Tarot is often depicted as a woman with her upper body on the ground, representing common sense and power, but her lower body below the surface, representing intuition and spirituality.