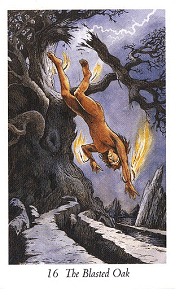 I. The position of The Blasted Oak Wildwood Tarot on the Wheel of the Year

The Blasted Oak Wildwood is located at Lammas point, August 1, next to The Woodward at the inner circle of The Wheel. The card is associated with the full moon and the element of Fire and Water, showing the thought of sacrifice.

II. The Description of The Blasted Oak Wildwood Tarot

The character in the Blasted Oak Wildwood is falling from the branch of the Oaktree which is broken by lightning. Flames are dancing around the body of the character, igniting the hair and burning the strings that this character used to tie people to the branches. When the character falls, he is still hovering, neither above the tree nor touching the ground. Lightning bolts are energizing into the air through lights like dancing fingers. The lightning also seeks to reach the ground with symbolic burning sparks, or the rays of the sky that struck the ground.

III. The Meaning of The Blasted Oak Wildwood Tarot

Only when the universe has creative power, so only it is capable of destruction. Supernatural phenomena and natural disasters have unimaginable destructive power. With a light sweep of its tail, a hurricane can destroy a bridge, or if the Earth shudders, the whole city can turn into ash. Not only that, but the tsunami also will sweep the whole world. On a personal level, we always build conceptual castles that are indestructible. We also make unique civilizations, believing that they will remain immutable and endure forever. We confine ourselves to the shackles of power and status. Then finally, we realize: we have nothing; we just borrow again and again in this life. All we own is what we have learned.

The image in The Blasted Oak Wildwood Tarot card consists of two traditional Tarot cards: The Hanged Man and The Tower. In this card, the Great Oak tree has broken to pieces by the storm. The fall may be too painful for those who have climbed and tied them to the branch. The delusions and arrogance of a materialistic life can be torn to pieces by a simple move of nature or destiny. The fire from the explosion will ignite the wrong connections, which have kept us in a place we think is safe. Only in The Hanged Man does the meaning of spiritual sacrifice and death come to life three times. In The Blasted Oak card, the Oaktree is trembling in fear just like the image of the tower being broken by lightning in the storm of The Tower. This card emphasizes that beliefs and delusions in power and matter can only end in loneliness, stagnation, and lead to mental collapse.

When we fall, the power that once flows through our senses with pain will be washed away. Illusions and lies will be burned. When our hands reach solid ground, the power will fall with us. Our senses will revive with the warmth of life. Our emotions will burn back in passion. Perhaps we have forgotten the urge of desires and needs to be understood. The nature of true strength and enduring soul cannot be bought with gold, status, or grandiose clichés. They are only found in ashes and embers when burning their own mistakes in the wild card of nature.

IV. The guideline of The Blasted Oak Wildwood Tarot

What appears to be random, destroys our beliefs and relationships is actually very natural and logical. As the sea erases what is built on the sand, you are liberated so you don’t turn into a helpless victim. However, you can always rely on whatever inner strength you have adapted and evolved through. Situations can happen suddenly, at an incredible speed. The tragedy can leave you dizzy and confused. But the fierce lightning, which brings you to the ground, has knocked you out of a coma, helping you avoid complex and fundamental problems. Do not show anger or pain at this point, no matter what has been lost, remember, it never really belongs to you. Be patient, wait, and learn from the process of loss.

V. Keywords and extensions of The Blasted Oak Wildwood Tarot

The primitive power, The destruction that heals, Lightning struck in the clear sky, The lightning that enlightens the soul, The fall that is purified, Flame of creativity, Break the framework, Rise up from the ashes of destruction.

The Tower Linestrider is a powerful card, a beacon of great change, riot, and even destruction. Along with that destruction is constructivism. The change will bring new opportunities.