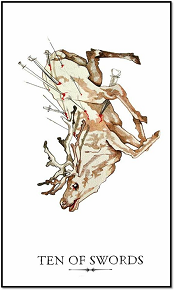 I. Keyword by Ten of Swords Linestrider

The Ten of Swords Linestrider Tarot is the card of the end – the end of a cycle, the end of a relationship or business, the end of a mode of existence. The end is probably a necessity or something you’re trying to avoid. It often indicates failure, disaster, pain, separation, or sadness. You can change this coming period of unhappiness, but in many cases, you can just let go and accept the trauma. This is hard work but just focus on your inner strength as well as the things and people in your life that can help you get through this situation.

The drawing used to illustrate this card makes anyone’s heart ache every time they look at it. The badly wounded beast is lying alone on the snow without any protective and comforting jungle surroundings around it. Often we have to go through our darkest periods alone. If this card appears with the Hermit, this is especially the case.

III. Ten of Swords Linestrider in a Tarot spread

If this Ten of Swords Linestrider Tarot appears in a past position, consider a time in the past when things went badly – ​​separation, betrayal, or a heartbreaking loss. Remember how past pain is affecting your current decisions and life. Wherever you see this card in a Tarot spread, remember that the bottom of the cliff is often where we begin our most glorious climbs. Hold your head high, this difficulty will soon pass. The Ten of Swords is usually the most unlucky card when in a future position. If you see this card with the Tower, get ready for surely harsh times ahead. The Strength card will bring balance to the Ten of Swords Linestrider Tarot, reminding you that you have the tools you need to get through difficult times and take on glory. Judgment and the Ten of Swords duo can be a strong sign that you should stick with your actions even when you feel like they might kill you. There are things in life—relationships, career and academic goals, material goals — that come at a high cost and push your limits, but the results will be worth what you are suffering. You can’t reach the top of a mountain without putting in the effort of climbing.

Like all Ten cards, this card usually symbolizes the end of a cycle and sometimes it can be both sweet and bitter but good for you. For example, to pursue a new opportunity, you must graduate from college or leave your comfort zone. Other times, the end of the cycle is traumatic, unexpected, and upsetting. It can talk about trauma, financial loss, or even the death of a loved one. Sometimes, when in the reversed position, the card speaks of an end that you have to reluctantly face or accept, an inevitable loss that must occur before you can move forward on your journey. But even in its worst form, the Ten of Swords is still part of the Fool’s journey. Seek the guidance and support you need to get through this time without breaking down.

The reversed Ten of Swords Linestrider Tarot implies that you may have finally achieved a balanced and clear perspective on your life and the circumstances involved. Take it one step at a time, and believe in yourself. You may have been through a very difficult time when this reversed card appeared, and indeed the worst may be over. You’ve come up with some solutions and plans to improve your situation, and that’s good news. Make sure you don’t make the same mistakes again that contributed to the problem you have to deal with. Make sure you see your own role in the problem.

The typical image of the card is usually a figure lying on his stomach, stabbed in the back by 10 swords. This is a deadly image not often seen in the deck. However, the card does not imply betrayal or stabbing in the back, but only represents extreme suffering, afflictions, and soon-to-go benefits. This card makes it clear that this is one of the unluckiest cards in the entire deck.

In terms of work, the Ten of Swords Linestrider Tarot suggests that your business advantage will soon be lost. In study or work, the card shows the decline of capacity and results. It has a hint of power or authority being confiscated or taken away. The advice is that your company or enterprise project is in a difficult time, take advantage of the accumulated assets to solve. If the company is just starting out, take the time to seek help. You cannot solve this problem alone.

In financial terms, money resources soon run out. Old connections will gradually disappear. You will soon lose many advantages and power. The card also implies the loss of customers and you have many customer-related problems. It sometimes shows an immediate but not long-lasting profit. It’s kind of like you can get it easily, but it’s really not. Be careful with new deals.

In terms of friends and colleagues, you will encounter many situations in which you need the support of close relationships. But that support was short-lived. If in a round of confidence or election, you will have an early advantage but will lose effectiveness over the following rounds. Even your influence over your friends, at this moment, this won’t work either. The advice is to start strengthening the relationship to keep it as long as possible. Don’t put too much hope on credit results at this stage.

In terms of love, unfortunately, the Ten of Swords Linestrider Tarot does not bring a good sign. Something in your love is not quite right. Ask yourself questions, accept reality, don’t disregard the truth. You can’t force someone to love you or treat you with respect if they don’t want to. If you just met someone new recently (and you’re looking for love) then keep looking and considering. It’s possible that the people you’ve met so far aren’t what you think they are.

In terms of family and loved ones, it is possible that disturbing things will happen soon. The reason is not clearly shown by the card. But it can be seen that their influence is quite large. The card also implies aloofness and indifference in the family. This internal division may be at the root of that situation. The advice is to try to get along and unite during this time. Maybe your family and loved ones have to overcome great challenges.

Finally, you can maintain a spiritual belief that you have steadfastly bought until now. However, you must be careful with placing your trust in spiritual leaders who look out for your rights and interests and just want to make their pockets thick. You are breaking through with the past. This is actually a good thing, although it can be a little hurtful.

The Ten of Swords Linestrider Tarot is a card about terrible misfortune, but surprisingly, it often represents dramatic rather than real trouble. The character on this card is stabbed in the back by many swords. In fact, can anyone stand it? Are ten swords too much? Perhaps the suffering of this animal, while sympathetic, is only being magnified.

One of the meanings of the Ten of Swords is to “reach the bottom”. When disasters follow, we will first feel down, and then we will rise and laugh. In movies, the hero often says, “What else could be worse?” and we know that’s a sign he’s in trouble. When we see this card in a spread, know that disaster has finally come, and what you can expect now is that the situation will turn for the better.

The Ten of Swords Linestrider Tarot also appears when you are in the same mood as the victim. You feel certain that the whole world is treating you unfairly, making your life more difficult. When we are harmed, we often think that everything is so bad, unfair, and hopeless.

A righteous person is also the meaning of the Ten of Swords. A righteous person in this situation is not the same as someone who is willing to make sacrifices for those with whom he is not attached. With this card, any situation can be fulfilled, but making a turning point to help someone else will still be satisfying without the need for a close relationship.

This is not a sign of unhappiness and of course, there are many real tragedies in the world. Sometimes the card implies a sad event, but you still know when it happened. From the bottom of your heart, you don’t see anything funny, but most of the time when it appears, the card still has a bright side, as if your Inner just wants to joke about how you handle the personal sadness. When you see the Ten of Swords Linestrider Tarot, consider your attitude, and rest assured that you have reached the point where things will really start to get better. Like many cards in the Swords suit, the Ten of Swords makes us feel uncomfortable, but at the same time, it’s not necessarily a “doomsday” feeling. It is still a clear sign that you should be careful about where you place your trust.

In general, the Ten of Swords Linestrider Tarot appears to be related to the question of whether you can trust what someone tells you, or believe that a certain situation will be okay, then the answer is an absolute NO. However, always keep in mind that whenever one door closes, another opens. The message of the card is also a guide for you to move in a better direction. Believe in yourself and believe in the universe.