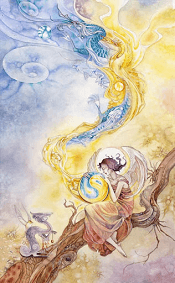 I. Description of Temperance Shadowscapes Tarot

She cowered, searching for silence from the depths of the inner, or the land of balance. From the center, she felt the excitement of the dragon and phoenix, twisted together. The two animals hugged each other tightly in a dark swirl of dragon scales and phoenix feathers until both of them nearly melted and merged into one. They were entwined in an endless battle to contest supremacy, unknowingly forming an elegant dance of giving and receiving, pushing and pulling.

The battle swept her into the whirlpool and suddenly attacked her senses. Like a conductor, she observed the overview and then recreated one of them whenever she sensed the loss of balance so that harmony was always maintained. Heaven and earth, fire and water, yin and yang, the summer heat and the cold weather of winter: these contrasts blend together with the endless push of yin and yang. They are perfectly balanced resources that destroy each other, in fact, they carry within themselves the purpose and definition of the existence of absolute contrast.

Being lack of water, the fire became extremely aggressive, forced and swallowed everything, and eventually burned itself down in a terrible flame. Being lack of fire, water becomes flexible and overflowing, submerging until there is nothing left but water, a silent mirror of a boring scene with emptiness. By clearly outlining the limits of each one, they all become imbued with life and create life, calm to symbiosis in the right balance; if there is just too much existence in an object, the other immediately becomes suffocated.

Temperance Shadowscapes Tarot refers to harmony and balance, the balance between oppositions, healing, the reconciliation between opposing divisions, self-restraint, exploiting the principle of absolute balance, and controlling them. Keeping the imaginary part from one thing will hinder the power of harmony.

By connecting them together to form a unified body and understanding the law of clearing of all things, a beautiful synthesis can be born. Sometimes, the nature of all things bears two faces and becomes a fulcrum of faith. Being flexible and understanding that there is more than one way to see the world can help you go further and kick down the invisible wall.

In the Temperance Shadowscapes Tarot, Stephanie also used the image of the Phoenix. But unlike the Phoenix in Western legends in Death card, the image of Phoenix in Temperance comes from the Chinese fairy tales, myths, customs, beliefs, and in this card, it is accompanied by the Dragon, wrapping around each other.

In ancient China, we could easily find the image of the Phoenix in the decorations of the royal wedding that goes with the image of the Dragon. This comes from the perception of Chinese people that Dragon and Phoenix are symbols of harmonious relationships between the husband and wife.

In addition to the image of “Phoenix and Dragon”, Stephanie also included in the card the characteristic image of the Yin and Yang circle – the symbol of the Chinese concept of harmony. These are the two concepts that refer to the two original opposing entities that make up the entire universe. Yin represents what is weak, dark, passive, feminine, soft opposing to Yang which shows what is strong, light, active, masculine, tough. Just like “Dragon” represents the husband, the image of Yang, and “Phoenix” represents the wife, the image of the Yin. Both of them blend well together.

Temperance Shadowscapes Tarot demonstrates that someone is trying to keep everything in opposition in a balanced state without being bias. It is different from keeping balance halfway of the Justice card, which can fall at any moment. You can understand that Temperance keeps everything balanced on a straight line, between two opposing extremes, just moved back and forth while Justice balances on a sharp peak, with countless things that can be deviated at any time. So, Temperance’s balance will be more contradictory yet durable.

From this sense of Temperance, we can easily connect to the Sagittarius zodiac that appreciates the power of solidarity among individuals. For Sagittarius, the opposing faces when combined will create an unexpected power – the power of the collective. And the most obvious thing that can be found between Temperance Shadowscapes Tarot and Sagittarius is that both do not want to push things to its extreme, especially emotion. Sagittarius always wants to keep his emotions in balance, and as obvious, he can always find a way to balance every emotion. Therefore, you will always see a Sagittarius with a cheerful and friendly appearance, so is the Temperance.

If this card is drawn during a spread, this may be an extremely difficult stage for you. But you always try to hide it inside, and on the outside, you always seem peaceful and calm even if there is chaos in your heart.

This Shadowscapes Tarot card will be greatly favorable if it appears in a spread about collective relationships. It shows your humility and good cooperation in the team, and you are always loved and appreciated for that. However, if it appears in a spread about love or personal relationships, it may be unpleasant for you and your partner. Because you always want to balance every relationship – just like Justice – you do not want to be too attached to any relationship, it will cause your partner being hurt accidentally that sometimes you cannot be aware of. At this time, you should consider more cards in other positions to get the most accurate advice.

Temperance Shadowscapes Tarot is also a card that shows a visionary and understands what you want so that you constantly concentrate as much as possible to achieve your goals without being distracted by things that are not worth paying attention to. These characteristics are very similar to Sagittarius. Therefore, if this card appears in the matter related to work or study, this is a very good time for you to research in-depth or invest more in your work with a look that far surpasses others.

Once again, Stephanie expressed her extensive cultural knowledge through the details and meaning of the card. This is truly a masterpiece that she offers to all cultural and artistic Tarot users around the world.

The meaning of the alchemy card (The Art Thoth Tarot card) will be better understood when we call it a high measure of balance or proper mixture. Harmony, balance, calmness, and peace in the soul are its properties.