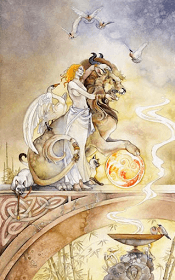 I. Description of Strength Shadowscapes Tarot

The lion roared. The ground shook, and the clouds fluttered with worries. The bamboos sway gently. Chinese people understand the hidden strength of bamboo: with its very delicate and elegant appearance, yet flexible and strong. It has a source of unobtrusive power to the outside, sometimes, swinging in the wind, then gracefully bouncing back bringing a soft rustle of leaves.

It roared again, the birds suddenly startled, leaving their nest hastily. The Virgin took half a step forward. She was flexible like bamboo sticks. Step by step, without fear, she and the beast, their eyes stare at each other.

The third time, the roar echoed to the blue sky, like the claim of authority, ownership, and dominance to anyone who heard it. She just smiled, slowly approached with outstretched hands and lightly touched the golden mane of the lion.

This card refers to courage, calmness, patience, passion, persuasive ability and skillful control. It is better to restrain conflict to control anger and violence than to be controlled by them.

An individual needs to have faith in success, although it cannot come at the same time nor is it easy – the lion shows ferocity, and the fire that it guards is on fire. Strength sometimes needs to be soothed.

There are many forms of strength. The source of the burning and brutal power, the power of an animal is the teeth and claws, the protection of a powerful wing created by a swan. The persistent power of oak trees grows from the head, gradually growing to become a great tree. And the strength of bamboo, flexible and assimilated, creates a solid energy source which cannot be easily broken.

Looking at the card, we can see the image of a woman taming a fierce lion with a calm and gentle expression. In Chinese architecture, there are many sphinx statues, and they are so popular all over the world that whenever someone mentions Chinese culture, they easily appeared in mind. But the origin of the sphinx statues is thought to be foreign. There are many theories that it comes from West Asia or India. But no matter where it comes from, regrading of the lion stones, everyone immediately thinks of diverse Chinese culture.

Although Shadowscapes Tarot companion book mentions the concept of Chinese people, the meaning of the lion stones to the Chinese cannot correspond to the original meaning of the Strength card. The lion stones of China come up with fierce looks, to guard the tombs and do not let anyone invade. It only expresses the power of a lion, not the tame of that lion. But according to the Buddhism of Vietnam, the lion is given the meaning as the symbol of strength, majesty but tame, supporting the Dharma.

The lion stone was introduced to Vietnam in the Ly dynasty, its origin came from India. Different from the fierce and thorny look of China’s, Vietnam’s lion stone is formidable, soft, and extremely meticulously decorated. Perhaps, the lion image in Strength Shadowscapes Tarot card fits the Vietnamese’s image rather than the Chinese’s. But whether it is taking the image from China, India or Vietnam, the lion stone in this Strength card shows us that Stephanie is very knowledgeable about the Eastern culture.

Returning to the lion image in the Strength Shadowscapes Tarot card, the characteristic image of Strength is a slender but strong woman who gently caresses and tames the fierce lion. This evokes women’s courage, patience, and control. That makes the lion lie down at her feet. As for the lion – a wild, dangerous and instinctive animal, it is always in a state of being ready to damage any other creature just to show its power, yet it is just a kitten under the lady’s hand. It is because of love and the softness of the lady has tamed the wild lion. Whether it is a person or an animal, there is invariably a need for love.

The image of bamboo also shows the power of flexibility. The bamboo has a slender shape but it is not easy to break under the strong wind. It is because of the flexibility to bend in the direction of the wind. But that does not mean that it is tilted by the wind, because the bamboo roots are strong, still retaining its “roots”. It only shows the flexibility and skill in communication.

At the same time, the image of Strength also gives out another thought about the definition of “human”. Why is it “human” and not “person”? Each of us has an inner child part. It is the ego, the very natural desires, very instinctive emotions that whenever reason is out of control, it is effortlessly revealed. This is the case for everyone, it is important whether or not they know how to control it. That makes each person different and outstanding. And, that control is also a milestone marking people’s awareness, which is different from animals.

So, the Strength Shadowscapes Tarot spreads a strong message about preserving one’s own image. Corresponding to the Strength is the Lion – a zodiac which is always very focused on itself in the eyes of others, always proud and full of power.

When Strength card appears in a spread related to relationships, it may be trying to remind you of restraining one’s ego, being more tactful and sympathize with others. If it appears in favorable positions, your calm and confident appearance will be your advantages to move forward and win everyone’s trust.

This Shadowscapes Tarot card, obviously, brings the message of strength. As its name, Strength represents the potential power of every human being. When this card comes to you, it means that the power hidden deep inside you will be a sharp weapon to overcome the challenges of work, love, and social relationships.

It brings the message of energy and supreme power through the image of a woman controlling a fierce lion. This image represents an intense struggle between the inner child and rest in each of us. The fight against self-indulgence and selfishness is the biggest battle, you will have to make use of all resources to win.

In addition, the woman’s calm face is present for great power in you. You have a sign of huge courage to resist the difficulties in life. Confidence and calmness in all of situations and problems is something to be proud of. Strength Shadowscapes Tarot appears to confirm that you are persistent and responsible. Those precious traits will be a treasure that leads to success if you know how to exploit them.

The Strength Rider Waite Tarot card emphasizes the power of the will beyond the situation and reminds you to focus on the things you want instead of the unwanted in life.

The Lust Thoth Tarot card depicts her as a woman tempted in sensory desires, riding on a lion-like hybrid. She symbolizes the passion that is pouring out through every pore in her body. Her desire was more than her naked body.

The Strength – La Force Tarot is conscious from head to toe. We can say that she is the best potential of Consciousness, in the aspect of diverting between high and low, between its spiritual energy and its instinctive energy.