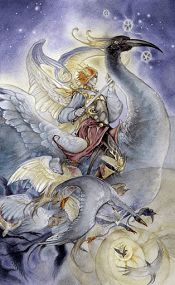 I. The meaning of Knight of Swords Shadowscapes Tarot

Knight of Swords Shadowscapes Tarot is a brave hero who daring headlong into battles to protect his beliefs. He was a straightforward person who spoke his point directly, so hiding something was the thing he almost could not do. This could be shown by his true honesty and loyalty, but lacking delicacy and thoughtfulness.

As a knight, The young man did not allow his emotions to affect the link that connected him and his existing goals. Emotions have turned into a strange, slimy, and blurry concept compared to what was considered clear, it was always the premise that created space for fear and anxiety.

This emotionless knight is a fearsome person because he is never tormented by fear or control. He is invincible and has no definition of failure in his cognitive dictionary. He wouldn’t turn his head once he got into it because he understood that there was no more suitable choice than a victory at the moment.

This knight has the character of an authoritarian person. Riding on the king of the bird’s back, they glided through every battlefield together, like sharp spears rushing away. He was the seeker through each layer of the sky with the sword in his hand and the wings wide open. A storm formed according to his wrath, suffered by the chaos created by the winged army. He was raised high above so he could see through and cut through this chaos. The sword now serves as a guide for those following him.

II. The Knight of Swords Shadowscapes Tarot in a spread

Unlike some cards belonging to the Swords suit, this card really brings out a source of optimistic and cheerful energy. Knight cards often mean that someone or something worth looking forward to is coming to you. The Knight of Swords Shadowscapes Tarot also implies that the sources of spiritual, emotional and physical energy are at their peak.

If you are waiting for news from someone or something, then it seems that you will get what you want to hear. This Knight can come with lots of activities, such as traveling, meeting friends, completing something. You do not tend to feel like waiting for anything to come to you, that is good. Let’s follow the call of your heart.

The Knight of Swords Shadowscapes Tarot represents destruction. When this card appears, it means that someone will come into your life and ruin the present peace. It warns that you may be getting in trouble by these people. In addition, the troublemaker here maybe yourself.

Knight of Swords also represents an aggressive knight who does everything he wants and doesn’t listen to others. He is not the type to suppress his impatience. So, this card appears as a warning to avoid such people at all costs or you must avoid becoming such people.

In some cases, it also carries positive meanings. You will gain confidence and optimism. This card suggests that you must try harder before the chances are lost.

In terms of love, Knight of Swords Shadowscapes Tarot alerts the momentary intense feelings that can confuse you with true love. If you’re single, this card suggests that you should let your emotions settle first and determine what you want.

In addition, if you are in a relationship, it warns that the authoritarian personality of either of you will put the relationship to a standstill. The two of you should relax and treat each other based on a more respectful attitude to maintain your relationship.

In terms of work, Knight of Swords Shadowscapes Tarot states that you will face certain difficulties in the upcoming time. The relationship between colleagues or business partners will be deteriorated. If you are planning to invest or starting your own business, you should be cautious because it will come with a lot of risks. Besides, you should definitely solve the backlog that not only does not bring any value but also costs you time and effort. The appearance of rivals and fierce competition will occur.

The Knight of Swords Shadowscapes Tarot implies that financial matters will be solved smoothly with your persuasive ability. If your financial situation is in a stable stage, you need to spend money appropriately to avoid extravagance. In addition, the lack of preparation and bad problem-solving skills will make you struggle with money problems. In case you want to invest money, you should seek advice from experienced people.

In terms of health, Knight of Swords Shadowscapes Tarot states that you or your loved ones in your family will have health problems. Concerns accumulated over a long period of time will cause you to depressed and dangerous illnesses to develop quickly. You are at risk for depression and some psychological problems. The advice here is to take more breaks, talk to friends and family to find comfort.

In general, spiritually, Knight of Swords Shadowscapes Tarot shows you are full of life and energy to accomplish your goals. You are almost uninterested in the difficulties you encounter, the only thing you know is that you must fight hard. However, this card warns that excessive determination can blind you and cause unfortunate consequences. You can be in danger without being prepared. There are times when you are not prepared for what you want to achieve. However, the distance ahead is still very long, you absolutely can draw valuable lessons to overcome this problem.