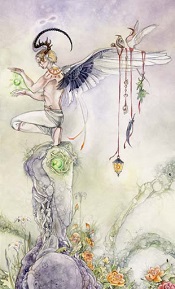 I. Description of the Magician Shadowscapes Tarot

Time after time, the Fool drifted everywhere, sometimes, she was like a seed floating in the wind, the swirling feather or the condensation of crystal dust, then she saw the Magician Shadowscapes Tarot. She quietly observed the man, suddenly realized the stranger who is getting along with the mysteries of natural elements. He was taught and learned to successfully control the ability to purify, summon and bind.

One day, she could not stand it any longer, lightly gliding her fingers to touch the eyes of the Magician which awakened with new beginnings at the moment. “Who are you?” He asked, instantaneously, the soul turned into a deer shape and jumped away.

He followed the trail deep into the forest. But that animal is always wise to place itself outside the reach. He walked on the ground with his bare feet and the wind blew through his hair. The sunlight flowed over his shoulder. The white light emitted from the deer reflected in the green light of the plants, mocking him so badly, until, all of a sudden…

It disappeared, suddenly he realized he was alone…

On the rock, he noticed there was something left for him. Relics of elements that shone under the sun; and he kept those treasures in hands, at the same time, he prayed with a smile on his face and let the energy flow over them

II. The meaning of the Magician Shadowscapes Tarot

This card talks about uniqueness, creativity, skill, will, self-confidence, agility, skillful use of hands, and tricks; mainly about capturing unknown things around you, exploiting them to become realistic and learning to throw invisible things into the world of material existence.

The Magician Shadowscapes Tarot holds artifacts representing elements: the light of the fire in the lantern, the sound of the sea in the shell, the breath of the wind in the raven feather, and the soul of the earth in the leaves. He understands what he wants, and, he also knows that he has the ability to turn all things into reality with the consciousness of his will and the knowledge of how to control the world.

In the Shadowscapes Tarot, if the Devil is blindly greedy, then the Magician is another kind of greed in a decent and clever way.

He is a talented magician who is fluent in all the rules of life and always has many tricks to achieve what he wants. He carried the long wings of the angel on the shoulders and the evil horn of the devil on the head. There are both bad and good sides within him, but here, we can see he tends to use tricks for his personal purposes. It is a demonstration of himself to gain much admiration from others.

On his wings, there are four items that represent four heavenly elements and four suits of a traditional Tarot deck: light (fire – wands), snail (water – cups), feather (swords), leaf (earth – pentacles), showing that he grasped the most basic rules of heaven and earth. On his head, there is an infinite sign emphasizing that his knowledge is immensely broad and unlimited. On his back, there is an image of a snake biting its tail. It is Ouroboros – a symbol of wisdom in the mysterious world, capturing the law of circulation of life and holding alchemy.

The greed of the Magician’ Shadowscapes Tarot is expressed in how he wants to grasp the ways in which things are made in this world. If the Devil is greedy due to the desire to possess available things to control it, the Magician is greedy by making them by himself and gaining the absolute admiration of everyone around. We can see it on the Magician’s hand, there is a sphere that gradually appears like a sphere lying in a stone pillar at his feet that is protected by snakes and is very dangerous. Because of that, the Magician was not foolishly looking for a way to obtain it, but he was only looking for a way to create it and to satisfy his curiosity and what this new challenge brings.

III. The Magician Shadowscapes Tarot in a spread

The constellation corresponds to the Magician is Mercury which rules the Gemini Zodiac sign. Mercury masters about collecting information, logical reasoning and ability to show skills outside. Gemini is full of curiosity, trick, flexibility, experience and skill acquisition. At the same time, there is also a trick to achieve the things you want easily (cleverly). Basically, the Magician Shadowscapes Tarot can only solve small daily problems satisfactorily without foresight and unable to establish major and solid plans to go big because he immerses with the odd details before his eyes. This is different from the firmness and providence of the Devil.

If being truly determined, every wish will come true as the meaning of the Magician. When you see this card in a spread, it means that goals can be successful if you take full advantage of your creativity and potential. The Magician card is a reminder that it is time for you to fully exploit your ability without hesitation. In some situations, this card shows that it is time to show off your skills to achieve success. You will have many new and efficient ways of doing things, which few colleagues or friends can keep up with.

If this card appears when you are carrying a difficult problem, you can find a temporary solution, but in the long run, it still needs a more optimal solution to solve it from the root of the problem. From there, you can walk further without fear of past things that hinder you.

The Magician Shadowscapes Tarot represents the innate strong will and power in you. You have an abundant energy source but have not been rationally exploited it yet, and this is a time of breakthrough. Do not hesitate or procrastinate any longer, if you are too concerned to skip it, it is hard to get the next opportunity.

The card also shows your high concentration on the issues, but you should focus on a specific problem to avoid making mistakes. At the same time, the Magician Shadowscapes Tarot also shows us it is good to know a lot, but we should also find a specific field to specialize instead of rambling and greedy for many things because this can lead to losing your direction.

Le Bateleur Tarot is a bisexual individual who works with both light and darkness, from the unconscious state to the supernatural. He was holding the wand on his left hand while his right hand held a pentagram belongs to perception.

When you look at this Magus Thoth Tarot Card, the center is a youthful relaxed character, who is a great dexterity (on the tip of the toe) on the mountain of the subconscious and juggling various symbols floating around.