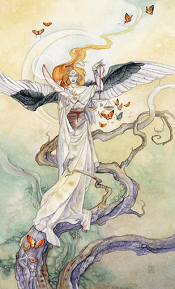 I. Description of Justice Shadowscapes Tarot

In the mind of the Egyptians, when death comes and takes away a soul which will be condemned by the goddess Maat. Her job is to weigh a soul compared to a feather on the scales, and if not relevant, the soul will be banished to hell.

There are people who say that Justice is blind, but she is not. Her eyes are bright and white, not the light of blindness but the pure white light of truth. She can see through the boundaries of the flesh, stripping the shells of emotions, mediocrity, illusion, and deception, into the depths of the heart, where consciousness is liberated. There is no longer anything to hide. She represents the law of cause and effect. The souls gathered around under the butterfly form, and she placed the feather in the heart, just like a sword.

She does not judge with personal bias or in the gray color of hesitation but only the limit of absolute black and white. Everything is recognized according to its nature – fair, objective and judicious. There is a balance that will be obtained when justice is given, not by reasonable arrangement.

Justice must be based on logical thinking which is able to objectively see situations and evaluate what is needed. It focuses on truth, morality, and responsibility, and maybe compromise should be established to understand the truth of both sides of the problem. Also, it confesses and accepts the truth, and it comprehends the results of your actions and the connection between them and the surrounding, and in the meantime, it puts a process for the future.

Shadowscapes Tarot is a deck of cards that inherently features many specialties of different cultures. So. with Justice, author Stephenie used the Goddess Maat image to convey the content to the card. Maat is the goddess of truth, justice, and harmony of Egypt. As the daughter of the  God of the Sun, Ra, she presided over the trial of the dead at the place of the throne of Osiris. Each person, when he or she dies, must appear in front of 42 judges and declare whether he/she is innocent or has committed many sins.

The soul of the dead will be weighed on the scale represented by an ostrich feather. This scale is tracked by Anubis, the god of the moon, and recorded by the god Thoth, the God of the moon, and Maat’s husband. If the heart of the person being judged is unbalanced with the crime they committed, that person will be devoured by the frightening female monster Ammut with a shape that is a combination of crocodile, lion, and hippo. If they had lived “with the Goddess Maat in the heart”, purely and morally, they would become a God and live with other Gods to fight the snake Apep.

Carrying the image of the Goddess Maat, Justice Shadowscapes Tarot looks soft, flexible and bears a heavy responsibility. Instead of the usual sword in the other Tarot decks, Justice held a long feather in her hand and brought it close to her heart to show that she herself always put justice above all emotions, but her justice was as flexible and soft as a feather, not rigid and sharp like a sword. Perhaps, the author wants to look towards the justice associated with humanitarianism rather than the harsh justice without giving people a chance to correct their mistakes.

Justice Shadowscapes Tarot appears in the form of scales representing the zodiac of Libra. The card announces that the surrounding issues will soon receive a conclusion, whether satisfied or not, that conclusion is still made according to the principle of fairness. You may be about to sign some legal papers.

At the same time, the image of Justice holding a balance and standing on a winding tree trunk with her wings twisted to the side makes us feel like she is in a precarious state more than ever. Justice Shadowscapes Tarot, not also has to keep her mind steady but also has to keep her body balanced on the tree trunk. Like the Libra – a zodiac that keeps everything around in a harmonious and balanced state.

So, when you receive the Justice in a spread, you are probably carrying difficult choices between emotion and reason. Your mind is torn, and you have to decide how to harmonize both sides. Therefore, this is when you should calmly and carefully consider all aspects before making a final decision. This is a time of slowing down to observe and analyze, not to rushing. Everything that happens after that depends on your current decision.

Sometimes, Justice reminds you to be honest with yourself. How long has it been before you look back at yourself? Are you running away from things that you dare not to deal with? This is the right time for you to look back on yourself and face courageously with all obstacles to solve them smoothly.

In addition, Justice Shadowscapes Tarot looks at everything with a third eye on her forehead to avoid the subjective and bias of mundane eyes. In some cases, Justice also reminds you to consider issues objectively and fairly. In love, Justice might recommend that you should not focus too much on your relationship and ignore other factors. That will cause suffocation and frustration for the relationship, which easily leads to unnecessary cracks.

The message Justice card brings is that you should be fair to make decisions in your life because it not only affects you but also others. The card predicts new contracts in the work will come after many difficulties. You deserve the best, so be confident and show yourself more to balance the aspects of life. Luck and success that will soon come.

Sometimes, Justice Shadowscapes Tarot appears with some negative meanings. You are doing something sneaky and dishonest kinds of stuff, and as a result, you will soon have to pay for it. On the other hand, the card states that life does not always make fair judgments for all of us, but be patient because “what is done by night, appear by day”. You can be sure that if you are a victim of glaring injustice, every fact will eventually be clarified.

The Adjustment Thoth Tarot card contains different topics. It represents objective and clear perception, consciousness, making judgments judiciously, immortality, balance, and fairness. It also shows that we will get what we deserve.