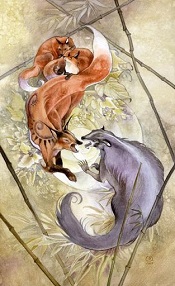 I. The meaning of the Seven of Wands Shadowscapes Tarot

The female weasel tries to fight off the crazy badger, meanwhile, its children are being protected inside their mother’s curled tail. They cringed together while the other two warriors kept on probing each other. They pounced at each other as if testing each other’s reflexes, then followed by a powerful bite to affirm their own defenses.

The mother weasel growled and attacked suddenly. She knew she would not fail because deep in her heart, she never wanted to lose any of her children! That fear burned within her heart. Her actions at this moment were very important, not just courage, but more than that, all for a great love for her children, regardless of reason and deliberation. Right now, only faith could cause the battle to intensify tenfold with a fiery will.

The bamboo sticks are a symbol of strength and courage. This plant possesses the flexibility with a slender appearance: no matter how much it is tilted in the storm, it will not be knocked down. It grows resilient and there are countless preschools flourishing all over the place which is a great contention for the sunlight and space.

The Seven of Wands Shadowscapes Tarot represents standing your ground firmly and protecting what you believe. The world is full of conflicts and fierce competition, and people must learn how to be brave to face any possible challenges. Do not fall under a harsh storm but instead, you have to know how to be flexible like bamboo. It seems that the difference in ability can still be overcome with strong faith and courage.

II. The Seven of Wands Shadowscapes Tarot in a spread

The Seven of Wands Shadowscapes Tarot card represents combat. Someone will disturb you, which can lead to serious consequences. The chaos that someone brings makes your reputation affected. Challenges compel you to fight for your rights and justice.

The meaning of the Seven of Wands card says that competitive tricks and unfair-play at work can take place. There may be someone that will attack and intend to defeat you. There will be cases where you do not know who your opponent is but the troubles they bring keep crushing you. It could even be an anonymous person on social networks. On the positive side, this person is jealous of what you have gained so far, you can be completely proud of your achievements.

In terms of love, Seven of Wands Shadowscapes Tarot predicts the controversy and conflict can lead to collapse. The two of you will fall into a state of tension. However, you should not compromise and make give in. Seven of Wands thinks that if you both give in and do not talk to each other clearly, the trouble will continue. Let’s maintain your personal view and present it to your partner.

The card refers to the fierce competition at work. You must be prepared to face the upcoming challenge. Your opponent will appear, this person wants to defeat you with burning ambition. If your company is growing steadily, Seven of Wands Shadowscapes Tarot predicts that those competitors are about to enter the game. If your company is about to sign a new contract, this card forecasts the terms of the contract will be controversial. The good news is that you always have the most advantage in this battle.

Perhaps an earlier achievement has put you in a competitive situation. To achieve success, you will need to have a steady stance and protect your position. If necessary, you will probably have to stand firming in a quarrel. Your dedication to your ideal/career will help you to win. You have the strength and resilience to face the competition that is entering your life or work.

Seven of Wands Shadowscapes Tarot also refers to the lack of flexibility and decisiveness in spending. You do not have adequate spending plans for your financial situation. At this time, capital contributions and investments should not be taking place. The card says that things related to teamwork or collaboration are not very satisfactory, conflicts of interest can occur at any time. The hesitation in regaining your rights will leave you at a disadvantage. Therefore, this card advices you to be more determined and frank about your expenses and benefits during the joint investment period.

Competition and effort at work almost take up your time. Seven of Wands Shadowscapes Tarot signals that at this stage, you will receive several health alerts, the invisible pressure makes you stressful. Some external factors cause your body to lose its resistance, you should eat and sleep properly. This card affirms that the pressures during this period will adversely affect your physical condition, the most important thing is to moderate activities and spend a lot of time resting.

The Seven of Wands card refers to the battles you have to go through in order to maintain your position. These difficulties are a must to motivate you to get what you want. The card advises that whatever difficulties arise, firmly stand your ground. You must fight to protect your achievements and never lose faith. Eventually, all of your efforts will be rewarded.

On the negative side, Seven of Wands Shadowscapes Tarot predicts that you may be overwhelmed by the responsibilities and challenges you must face. You feel pressured by competing, and therefore, you start comparing yourself with others. This inadvertently causes feelings of hurt and jealousy.

Besides, the card also implies that you will be the main subject of criticism from others. This time, you should avoid unnecessary conflicts. When you want to give up, remember the reason why you started. The card also advises you not to push your ego too high to accidentally destroy the relationship with those around you.