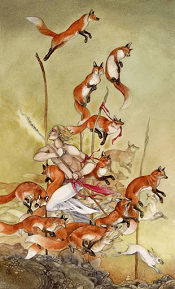 I. The meaning of the Five of Wands Shadowscapes Tarot

Avoiding the hunt, the wild rabbit ran with all its might, running as far as possible. Darted over the rocks, wriggling under the branches, it quickly pressed its foot to the ground, directly proportional to the rate of increase in adrenaline in the blood – the red, the smell of blood scattered all over the air, leading the way for predators. Just like that, they frantically followed the long, faint and greyish tracks.

Although they chased after the herds, they tried to trample on each other, for the same purpose, only to climb up to the top of the staff, and then dashed freely into the air, towards their prey. Everyone just takes care of themselves! And thanks to the battle of those fluffy furs, the rabbit had time. They did everything they could to hinder the small animal, however, they seem to be just picking up a fight; it was as if swimming upstream against a strong wave.

Exhaustion burns within each fiber and chest. Suddenly, there was a faint voice called from within the subconscious: “Try to calm down! And let the tidal conflict wipe it all out and run away.” But no, if doing so, someone might rush to trample it. It felt the hustle of the heart beating with each beat of the match. This is a difficult obstacle along with the life obstacles that it must overcome if it wants to survive.

For the Five of Wands Shadowscapes Tarot, sometimes, it is like a dozen obstacles thrown into life, gradually turning into a wall of obstacles that we need to learn how to overcome, let’s be brave and let your body awaken the flow of adrenaline in your blood and mind to face difficulties. Besides, you should learn to cope with those challenges with a strong recovery, do not be overwhelmed by despair forever, instead, know how to appreciate unfamiliar sources of power and use that to fight obstacles.

II. The Five of Wands Shadowscapes Tarot in a spread

In Tarot, number five usually represents conflict and change, and so does the Five of Wands. This card says that you are in the middle of a conflict, tension or competition and it is affecting your ability to advance toward your goal. Instead of being able to work with people, you are against that, so your views are constantly challenged. The problem here is that everyone is trying to express their views but nobody is listening.

The Five of Wands Shadowscapes Tarot is a card of competition, this card predicts you are about to undergo a contest or competition with an opponent in the near future. Sometimes, the card predicts that this will be a friendly competition, helping you perfect yourself and move forward. But over time, these competitions will gradually become serious.

The meaning of the Five of Wands warns that competition is approaching, although it is not fierce at this point, it will soon come to conflict. Someone will become jealous and have the intention to depose your reputation. You are wasting your time observing what others do and envy instead of minding your own business. Instead, if you take advantage of your envy and ambition in the right place, you will soon get what you want.

In terms of love, the Five of Wands Shadowscapes Tarot says that you are losing your sense of security in your current relationship, so there may be some issues that may be bothering you in the future. You have to fight for the present affection. However, the Five of Wands is not sure that all of your efforts will pay off correspondingly.

This card advises that you should not be impatient, instead, just slowly fix the mistakes. You and your partner should sit down to talk to each other more often, the loss of affection often does not bring good things. On the other hand, if you have been in a relationship, this Shadowscapes Tarot card implies that there will be some minor problems with your ex.

A number of internal conflicts will arise in the near future, the group meetings often bring no results due to disagreements. So, this card suggests that you should be clever in balancing your expression and listening to opinions from other people, impulsiveness can stress and ruin your relationships with colleagues.

If you are still looking for a job, this is a fairly competitive phase, and the company you are about to apply to may also be the target of many other candidates. The advice of the Five of Wands is that you should clearly identify your goals and abilities, the hasty and impatience can ruin your original plan.

The subjectivity and recklessness can cause you to suffer a financial crisis, you will have problems related to spending and investing money. The Five of Wands Shadowscapes Tarot also warns that the lack of vigilance will put you in debt or budget shortage. Some past relationships will involve money, so to avoid the unnecessary hassle, you should limit borrowing and learn how to spend in a reasonable and scientific way.

The Five of Wands points out that you will experience emotional trauma, your moody personality leading to inaccuracy and bias in making decisions. The advice from this Shadowscapes Tarot card is that you should spend time doing activities that are more about mindfulness and relaxation like yoga and meditation. In addition, this card also assumes that if you are being treated, the condition may worsen due to the influence of external factors. You should rest, limit excitement, forge yourself a more optimistic attitude.

The Five of Wands Shadowscapes Tarot implies that you will have to compete in a whole new field that you have never encountered before. You will meet challenges and confront those who are competent, feelings of jealousy and aggression will arise in you. The card suggests that you should accept the challenge with goodwill and a comfortable mind. The card also tells that this is the stage when you will face with really fascinating challenges, you will have the opportunity to show your ability. Let’s compete with friendliness and the spirit of fair play.