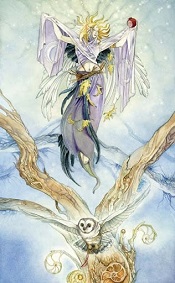 I. Description of the High Priestess Shadowscapes Tarot

The High Priestess Shadowscapes Tarot looked up towards the sky. She immersed herself in the glow of the stars looming over her cheeks. She was in tune with the dazzling shimmer, feeling the softness radiating inside her inner mind and opening the door to the glittering corridors and colorful patterns.

“We were here when the mountains were young and the sea was just a dream. We have seen the blooming hills countless times. We watch the clouds sketch the dreams with the kind of serene language throughout the centuries…Let our voices be heard”.

The sound of the owl echoed in the night, inviting the mistress with the music from the darkness. Those white feathers glittered under the moonlight. The owl flew over the night and was ready to land where the female mistress was located.

In the twilight, the night gradually filled with murmur – mysterious knowledge of the stars, the plants, and the earth. The souls whispered in each other’s ears about the collected stories with their knowledge in the tone of the whistling wind. The night linked sounds together with its hands, turning the voice into tangible material, and appearing in her fingers, is a golden key. She summoned the owl and said, “Take it, and become a secret carrier”.

II. The meaning of the High Priestess Shadowscapes Tarot

The High Priestess Shadowscapes Tarot raised her hands, and in this posture, her body became a symbol of a holy grail. The owl represents the knowledge keeper and carries a key that can decipher secrets. Pomegranate is a symbol of Persephone, the daughter of the Goddess Demeter. In legend, she had eaten some pomegranate seeds, therefore, she must be bound in marriage with Hades. The pomegranate is considered a symbol of birth and death. The images of the moon woven on her clothes are full and crescent, but the new moon helps to form a complete cycle, covering all into a unified whole.

This Shadowscapes Tarot card represents an elegant and pure priestess. No exceptions, with his creativity, Stephenie cleverly used the legends and images of different cultures to express the meaning of the card. With the image of a feeble girl who is being tied up in midair and holding a half-eaten pomegranate in hand reminds us of the legend of Persephone in Greek mythology. Because eating the food of the underworld, she had to be Hades’ wife, to live half a year in the underworld and half a year in the earth. This image shows the role of the mediator between light and darkness, between yin and yang, and the guide into the deep inner world. Below her, there is an image of an owl, which symbolizes the key to endless knowledge.

At the same time, unlike the proactive way of keeping secret of the High Priestess in the other decks, in Shadowscapes Tarot, she keeps her secret reluctantly through the image of the Holy Grail appearing in the line “the High Priestess lifts her arms out, and in that gesture, her very body becomes the living symbol of a chalice” of the companion guide book.

III. The High Priestess Shadowscapes Tarot in a spread

The image on the High Priestess Shadowscapes Tarot card is a powerful and intelligent female priest standing by the threshold of knowledge and wisdom. It represents the endless source of knowledge you are looking forward to exploiting. The card serves as a reminder that you should take advantage of the hidden potentials to capture your own life. The lucidity expresses clearly with the letters on the card and the intelligence and sensitivity within you should be exploited.

The High Priestess is in the dark like deep protection and shelter. At the same time, darkness is like a challenge that forces you to get rid of your limits by listening carefully to your inner voice. All problems will be solved by perseverance.

When the High Priestess Shadowscapes Tarot appears, you need to reconsider the problem in a thorough and satisfactory manner. Is there someone who carries a lot of pain that cannot speak out or bring a great deal of concern about something inconvenient? The problems surrounding this card often mean a lot of passivity and dependence on others, leading to a frustration that is difficult to disclose, although insiders can understand very well.

Mystery and wisdom are the messages of the High Priestess. This card is loved by many people despite the fact that the meaning of it is sometimes unclear. It challenges your curiosity, analysis, and judgment to clarify the problem. Besides that, the High Priestess is a symbol of skepticism that needs to use your intuition to judge situations. You will have a feeling of someone hiding something behind your back. In the future, this card predicts secrets that will soon be revealed.

It provokes curiosity in you, therefore, you have to calm down to extract the problem and review everything to discover hidden things. To do that, you have to apply all intuition and knowledge to make a decision.

Being associated with the High Priestess Shadowscapes Tarot is the Moon, which is gently ambiguous. When getting this card in a spread, people often have to spend time listening to their inner hearts and voices, to look back at themselves, and to pay attention to uncertain things that have been ignored by the hustle of life. High Priestess is a soft melody between sudden turns – a time for your heart to calm down to enter a deep inner world.

High Priestess of Shadowscapes Tarot has successfully completed the task of conveying the image of a gentle and pure priest, bearing in her heart the aggregate of hidden secrets. Again, we see the creative spirit and seriousness of the author of the deck in creating the perfect product in every detail.

The High Priestess Rider Waite represents wisdom, serenity, knowledge, and understanding. This character is often described as a guardian of the subconscious. She sits in front of a thin veil of awareness, which separates us from the inner within ourselves.

In the form of the High Priestess Thoth Tarot, we find everything beyond the thought, lie on the depths of the subconscious and linger through the messages of our dreams and illusions. Sais was worshiped as a “great weaver”

As a symbol of pure holiness, the High Priestess – La Papesse Tarot reveals the intact part within us that is never injured or interfered, the virgin witness that we carry within us, sometimes, completely invisible, being the representative of each of us