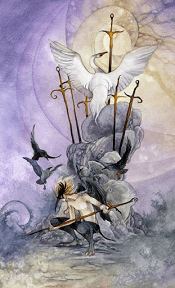 I. The meaning of the Seven of Swords Shadowscapes Tarot

The mask is always a safe hiding place for him, where he covers his true nature, it seems that only a few people can smell the scent of satisfaction stifled in that tone of his voice. He had just completed his plan to steal one of the swords from the Guardian of the Swan. In his mind, he always thought that the guard was short-sighted, but in reality, she could see everything, even with half-closed eyes. But thanks to that, she finally realized the nature of this stretcher.

The blackbirds swooped down and approached him. “Oh, what did you just have? Oh my God, that is a golden staff! Look how radiant it is! ” The birds were intrigued and attentive by the bleak light coming from the sword he had just stolen. He didn’t care much, so he turned his back on them. In his eyes, he himself was the most lucid blackbird, the only one who could pull the sword out of the rock.

The Seven of Swords Shadowscapes Tarot represents efforts to escape responsibility. He is a thief, always trying to run away with what does not belong to him. Being humiliated, he always tries to capture everything for himself, will suddenly turn into two faces for anyone trying to approach himself. Is this the result of a more tolerant view of the world? There is nothing clear. There is a saying, “fool me once, shame on you; fool me twice, shame on me”. So why do we still have to risk putting our faith in others like that? Deception always produces doubts and pessimistic views.

II. The Seven of Swords Shadowscapes Tarot in a spread

The Seven of Swords Shadowscapes Tarot may mean that you are treating someone with disrespect. Sometimes, this card may imply curiosity about the life of the person who you are not involved with. If you find that someone is curious about you, then you may feel right. If you are tempted to “dig up” someone else’s life (unless your children make you feel worried about them and want to control their lives), try to resist this intention. Everyone has privacy.

Sometimes, this card implies that you are running away from something such as commitments, responsibilities, hard work or relationships. You may be hesitating and letting problems go away because you do not want to solve them. This card conveys a message that you are probably making things worse for yourself and others by hiding away.

The Seven of Swords Shadowscapes Tarot card also announces betrayal. This card is a bell that warns you will be betrayed and deceived by those around you. They tend to be unfaithful and willing to throw you down until you run out of value. These people will hurt you deeply. However, this will be a valuable lesson for the future.

Besides, this Sword card warns you to be deceived. You may have to take responsibility for the mistakes you did not make. Some people want to turn you into cannon fodder for the evil things they do.

In addition, this card represents that you are deceiving yourself, you think that what you do is right whether it is illegal or restricted, you clearly know you are in pain but still fooling yourself that everything is alright. However, the positive thing is that you will get rid of toxic friends and relationships, the people who stay in the end no matter what are the most loyal friends.

In terms of love, Seven of Swords Shadowscapes Tarot is not an ideal card. If you are in a relationship, you are deluding yourself that the relationship is still great, you tend to blindly forgive the mistakes of your other half. You are immersed in the sweet taste of love without being aware that you are going in the wrong direction.

Therefore, this card warns that you will soon be awakened by betrayal and exhaustion. The advice here is to reconsider your current relationship and do not ignore any unusual signs. If you are single, this is not the time to start dating.

In terms of work, the Seven of Swords Shadowscapes Tarot warns fraud in the business. Your company or business is showing behaviors that harm customers’ interests. This card also warns of a colleague’s unfair-play. It recommends that you should clearly identify what you are pursuing and what your ultimate passion is so as not to waste time.

In terms of money, this Sword card warns of old debts and uncertainty. You should promptly process any outstanding debts. It also suggests that it will take longer than expected to recover your investment or loan. You should outline a clear spending plan, what to prioritize and what to buy later.

In short, Seven of Swords Shadowscapes Tarot warns that problems with work and money will stress you, but they are not really that threatening. On the other hand, it reminds of legal problems that will make you depressed. At this stage, you should spend time resting and relaxing, as long as following a healthy lifestyle.

Seven of Swords Shadowscapes Tarot emphasizes deception and dishonesty. It indicates that you or the people around you are having trouble getting rid of something. At this stage, you may be tempted by something and be in a troublesome situation. However, you are hoping these problems will go away on their own, which makes things worse. You are running away and denying responsibility but it seems that things are not going according to your calculations. Let’s take action instead of hiding In addition, this card encourages your own exploration and research on new areas.

At the same time, this is the appropriate stage to correct the mistakes that you have made. The bad things you encounter are an essential part of your life, instead of being immersed in the past, be brave to face and move forward.