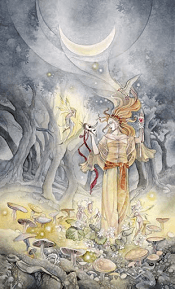 I. Description of the Moon Shadowscapes Tarot

The sun’s eyes slowly closed, and the intense sunlight that spread throughout the world faded away and then turned off. The time has come for the moon to emerge, taking over half of the world. The magic circle of the mushroom goblins glowed, emitting soft waves of silver light. At the time of the transfer when the twilight, they became more and more brilliant, uniting with the goblins to light up the road for the Fairy Queen.

“Here she comes!” The news echoed in the wind with the lovely voices of the goblins, they were so excited that they wanted to go crazy. “Get out of the way!” They screamed, dashing through the forest like arrows. They radiated magical halo, teased and deflected anyone who was curious to follow the seduction. The Gods of forest clasped hands tightly around the gray birch trees, where the leaves fell and followed the Fairy Queen’s footsteps. Strolling through the old forest, the anemones growing under her bare feet, she gently smiled and started dancing.

II. The meaning of the Moon Shadowscapes Tarot

The paranormal is the master in the art of deception. Potential dangers exist when stepping into a fairy mushroom circle that can be easily guessed. The moon is the kingdom hidden behind the perception, satisfaction, and predictability in each event. In the afterlife, it represents fear, but full of inspiration in a specific way, which makes people easily discouraged or endangered if careless.

Unstable travelers will easily be tempted by the goblins to get lost and deviate in the dark forest. But those with a strong sense of wisdom will see the point of sharpness across the blurred line, so they are rarely led by trivial temptations. The moon is the hidden way out that leads to the land of invisible mysteries, the source of the mixture of darkness and light. Through that place, there is a secret gift of the Moon to those who truly know how to accept it.

III. The Moon Shadowscapes Tarot in a spread

The zodiac corresponding to this card is Pisces which represents creativity, intuition, and idealism, the ruler of Pisces is Neptune

The Moon Shadowscapes Tarot often means to be deceptive. Sometimes, this card implies that the secrets of you or those around that affect you are being hidden. On the other hand, it can also represent deception. The lie may come from the stranger to your closest friends or maybe you are deceiving them. If you feel you can not trust someone, it’s likely that they are not trustworthy. Believe in your instincts. If you are waiting for someone’s answer, it may take you a long time to get it, try to be patient. The Moon is usually cyclical, your mood may change continuously in the upcoming time.

The Moon Shadowscapes Tarot has no clear message in terms of love. It does not reveal the future, the only thing you can do is to bravely move forward. This card only reveals that this time is very suitable to start a new phase of romance. Sometimes, the meaning of it is a lie in love, this will be the perfect deception that you can hardly recognize soon.

Starting or ending a relationship can take place during this period. The Moon recommends that you do not let external factors affect your relationship. Instead, let’s be calm and listen to yourself, to see if that person is really the perfect match as expected or just moonlight silhouetted on the water, obviously also yet blurry.

The Moon Shadowscapes Tarot warns of financial ambiguity with modern business status. If you are in the process of looking for a job, you should clearly define what job you want to do and how realistic you can be to identify a compatible workgroup. Illusions of your own abilities can lead to egotism or extreme frustrations.

On the other hand, if you are planning to do business or invest, you should be careful because you may not see the shortcomings that exist. The Moon Shadowscapes Tarot also warns that any anger and conflict with a colleague or superior will not yield any good results, on the contrary, it makes you angrier.

The Moon does not bring good news about money. Your resources will temporarily flow very slowly during this period. A “tightening” spending regime during this period is essential. Do not depend or focus your mind on a fixed source of money, instead, think about how to manage financially with your own capacity. The Moon brings the message that no one but you can pull you out of the quagmire of the financial crisis. The Moon Shadowscapes Tarot also warns of the appearance of lies related to money.

Relaxation and rest during this period are essential. After spending efforts dealing with the trouble, you become exhausted. The pressures from your life, work, and even your relationships make you stressed. Let’s take a break before things become worse. When there are signs of instability with the body, you should go to see the doctor.

The Moon Shadowscapes Tarot card also says you are on that is full of obstacles. The light the moon brings can lead the way for you through this path. Your intuition is at its best now. When you are aware of the dangers, you will deceive yourself against common fears, which is helpful in creating strength and belief. Sometimes, it is a sign that you are straying and wandering around without a clear goal. You must find your way back to your clear path and purpose.

The Moon – La Lune Tarot represents the mysteries of the soul, the secret incubation process, which is hidden. This is not the face of a young girl but a face imprinted with ancient wisdom stemming from its orange rays.

The Moon Thoth card leads us into the endless depth of our inner world, and thus, enters the visual world of the soul. It allows us to have a vague idea behind the example through which we adjust our conscious world to adapt to the fear necessary for our safety.