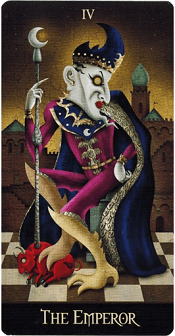 I. The Description of The Emperor Deviant Moon Tarot

Dominating everything around him, The Emperor sat there confidently. Although satisfied with his achievements, he always kept his eyes on other conquered subjects. After Mother will come to Father. That is also the reason for The Emperor’s appearance. The fifth card of the twenty-two Major cards is The Emperor Deviant Moon Tarot. Probably when it comes to the Emperor, many people have certain images in their minds. This King wears a dark blue robe and crown. The seven dots on his hat, which can represent seven coins – an observation and deliberation are being calculated in this king’s mind.

With engraved gold patterns added, it increases the nobility and power of this person. The purple color on the entire inner costume reveals the great and profound wisdom of this King. This man has a beard symbolizing expertise and experience in life. The association The Emperor Deviant Moon Tarot with a father is also reasonable because of his experience in life. A white beard is the hallmark of time.

The Emperor’s wand in Deviant Moon Tarot has a bit of variation compared to the standard deck. In the The Emperor Waite-Rider Tarot will hold the key Ankh, symbolizing Egyptian life in his right hand. Also in this card, the wand stabbed straight on a male sheep.

The image of sheep in Greek mythology has certain meanings. Sheep represent the peak of wisdom, determination, action, initiative, and leadership. It is also a symbol of Aries – the ruler of the stars of the Emperor.

The holding of power and dominion seems to satisfy The Emperor. Most senior leaders are always men because many people think that men are visionary, and personally, men are greedier than women. The reason is not that the women cannot see the big picture, maybe they have not fully exploited that ability, but the men to the end still have to achieve their goals, in their dictionary, there is no room for the so-called tolerance.

The sitting posture of The Emperor Deviant Moon Tarot is also uncomfortable, with his head facing the right side while the other half of his body is pointed to the left. Although sitting on the land that he rules, his eyes are still constantly searching, expressing his ambitious nature, always looking for opportunities and wanting to conquer more.

His face is white and cold, his eyes are sharp like a falcon, his cheeks and lips tightened – these characteristics represent extreme cold and arbitrary. The emperor’s weight and arrogant posture seem to be ready to kill the sheep at his feet without any expression on his face.

His collar spread out like the way a cobra reached out arrogantly, showing strength, ready to find and kill its prey. On top of his wand is the moon, in a sense, the moon represents emotions, is completely held in hand and controlled by The Emperor.

The second moon is in the middle of the emperor’s costume, while the sun represents initiative and domination, the moon now represents an immortal source of life.

The ears are listening, with two opposing dots in both color and direction, as an interference, a certain boundary between yin and yang, good and evil. And sharp legs like claws, clenching, and holding on to prey.

The square-striped black and white flags are only raised in races, the Emperor himself is always in the position of competing with other countries or even racing with his greed. The game of kings always contains thoughts and calculations for the ultimate benefit. Behind him is the castle, where he dwells, the consciousness of life, but everything will remain under control if he settles on this throne.

II. The general meaning of The Emperor Deviant Moon Tarot

In most practical terms, The Emperor Tarot represents the highest leader, a head of state, or an exemplary and powerful figure in the field. This archetypal ruler is responsible for the affairs of a society or the community, proportional to his level of well-being and happiness.

The more enlightenment and cosmic perspective this energy brings, the better life will be for everyone. Archetype Emperor owns the world of matter and material manifestation. As you apply this card to your situation, acknowledge your mastery potential. Strengthen the sense of sovereignty within yourself, regardless of any conflicting beliefs, habits, or appearances.

III. The reversed meaning of The Emperor Deviant Moon Tarot

When The Emperor is reversed, he may tend to behave like a petty tyrant, demanding pampering, worship, and flattery. He prefers his version of events to what is true and as such risks losing the respect of his people.

Try to control any arrogance that might distort your point of view. Remember, although The Emperor looks like a king, he is the servant of everyone in his kingdom. If he does not serve well, the negative impact of his shortcomings is what will degrade him.

IV. The guideline of The Emperor Deviant Moon Tarot

When The Emperor Deviant Moon Tarot shows up, he advises you to get in touch with your inner sovereignty and natural ownership. Realize that somewhere deep inside you is a royal memory. Approach inward to find natural nobility and leadership. These innate qualities will help you manage your current situation.

This King suggests that you have the necessary abilities to become the ultimate authority. This situation is an opportunity to show your abilities and skills. Act with the confidence of someone who knows how to get down to the business.

The symbol corresponding to The Emperor Deviant Moon Tarot in astrology is the Sun in Aries. Your life is in the existence of Mars in straightforward and steady Taurus. You do not encounter many challenges in your life or it can be said that your life is quite smooth. Your personality is stable, premeditated, and careful. Being a realist, but sometimes because you are too calculating, you end up losing your chance.

Your relationships are moderated and have been known for a while because you are good at communicating and keeping your connection fairly good. You are also emotionally dominant and quite persistent.

Emperor Deviant Moon Tarot states that your mental health is mainly affected more than your physical health. You rely on your communication skills and relationships to help you through the time of illness. The journeys in your life are not calculated in terms of money, once you want them, you will have to go.

On issues related to the government or the law, if once caught, you will have to respond to a lot of troubles that arise together. The nature of the event is not serious or changes in a certain direction, you should remove the old and authoritarian way of thinking to avoid mental fatigue and many backlog problems.

Emperor Shadowscapes Tarot is generally assertive, focused, and quite emotionally stable, thus, many small creatures looked up at him.