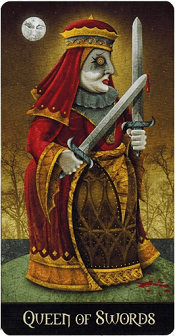 I. The Description of Queen of Swords Deviant Moon Tarot

Queen of Swords Deviant Moon Tarot stands alone in the forest with no encouragement or consolation. Her powerful position now does not help her reduce the loneliness of the soul. Droplets of blood drip from the tip of the sword as her heart is torn to pieces by everything happening around her. Women are born to be loved and take on the role of a solid rear. All things will be as true as they are if there is no war. In a society full of jealousy and antagonism, when women have to not only protect themselves but also their shelter behind. During that war, they are forced to pick up their swords.

They are not born warriors. Queen of Swords Deviant Moon Tarot’s round body is for the reproduction, care, and protection of her children. Circumstances push her to hold the sword with both of her hands. With a stance of defense combined with a willingness to fight. Her expression is frightened – a hint of worry and suffering. She is just protecting the things behind. Her enemy’s blood will spill as they try to reach her sword, but she never purposefully hurts anyone.

There are two theories set out when looking at the picture of this card. The first hypothesis is that this woman actually intentionally wields a sword in both hands as an unwavering conviction that the enemy comes from all over. Or the second hypothesis is if the bloody sword was picked up by her from the dead enemy’s hand as a defense. She sheds tears as pity for herself and her fellow.  The truth is that the drops of blood falling from that sword are like her heart being torn by the surrounding circumstances.

Red reminds us of The Fool. In an interview at the time of Deviant Moon Tarot’s introduction, Patrick Valenza said that creating and using color in Major Arcana cards from the time he was 15 years old was completely independent and distinct and he perfected them in 2004. But for the Minor Arcana cards, it is completely different, the color used in relation to the citizenship of each suit. The red color in the Swords suit expresses the struggle and pain of the heart. Thus, the red color in The Fool card evokes the image of joy while here is the color of blood, pain, and loss.

Queen of Swords Deviant Moon Tarot is also known as The Queen of the Thrones of Air, but deep inside is an inherent love, so the water element always covers this woman, that is why the external factor that embraces this card is Water in the Air. The corresponding astrology of this card Mercury in Virgo – the planet of communication set in the context of such an analytical zodiac.

Queen of Swords Deviant Moon Tarot represents a mature and emotionless mind. In mythology, femininity is involved in emotions, but in this card, the Queen has no choice in the midst of war. Therefore, this card demonstrates the ability to judge and discriminate fairly, without any emotional influence. She likes to know the series of how, what, why, where, when, who, and everything that helps her to comprehend her environment and to get others. It is not that she does not care about others but she connects with them through an intellectual understanding rather than an emotional one.

Queen of Swords Deviant Moon Tarot is a sign that you need to be independent in thought and judgment. You have to use your ingenious intelligence to make conclusions based on real pieces of information that you have gathered along the way. Empathy or compassion for others can confuse you from tasks, so it is important to use your head at this point. Don’t let sentiments interfere.

Queen of Swords Deviant Moon Tarot thinks very quickly, deeply, and can ignore distractions and confusion to get to the point. She is always faithful to her own opinions, and to the hopes of others. The best way to partner with this Queen is to present your thoughts and opinions with accuracy and honesty.

The reversed Queen of Swords Deviant Moon Tarot indicates that you are now using the heart more than your head. You let a lot of emotion interfere in a particular situation or problem, distorting your perception of the immediate situation. You need to comprehend what is going on and interpret the signals more accurately. Looking at your situation objectively and thinking with your head helps you to have a better view and decide what to do next.

Likewise, it shows a relationship that is pulling clouds over your prospect. You may need to refocus on your goals or direction, but you are hesitant about affecting the harmonious balance in your relationships. But anyway, you need to be bold, confident, and assertive. Having a clear vision, analyzing goals and arranging ideas for the future, and even only careful consideration should be made.

On the other hand, the reversed Queen of Swords Deviant Moon Tarot may show coldness, bitterness, frustration, and irritability, especially if she is completely devoid of any feelings or compassion towards others. In her quest to solve a problem, she refuses the help of many others and is seen as narrow-minded, stubborn, and selfish.

IV. The guideline of Queen of Swords Deviant Moon Tarot

Representing the energy of a Queen, this feminine power was traditionally known as a widow or divorced woman. In modern times, she can be seen as a model of independence, self-confidence, and intelligence. She often has extremely high standards due to her delicate sensitivities, which can be viewed as criticism by those around her or hard to please. Her real motivation is to improve the world, to enhance everyone’s understanding – so that everyone can have the space they need to be themselves.

She is not interested in obeying. She is too smart to be confined to the role of housewife or nanny, even though she is perfectly competent in those areas. She chooses her relationships (or her loneliness) and seldom gets caught up in dependent relationships – at least not for long. Her intelligence is not always the most comfortable when being around, but she can be trusted in her ability to see through the outside and point out the truth of a situation.

Queen of Swords Deviant Moon Tarot advises you not to cling to others at this point. Instead of putting too much faith in people’s promises, just nurture ambitions that you know you can do. This Queen doesn’t want to wait and see what others think, say, or do. She knows what she wants and how to get it. She did not ask for permission or even let herself be influenced. There are times in life when no one can take care of you as well as you can. It is up to you to make important decisions as you are the ultimate judge.