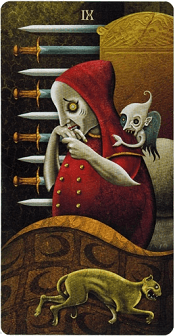 I. The Description of Nine of Swords Deviant Moon Tarot

The woman sits on the bed, unable to sleep. The nine swords appear in her mind as she is tortured by worries and nightmares. Until now, we have not been able to decode our dreams. People only know that their bodies need to sleep, and their brains are even more active than when they are awake. Accordingly, our dreams formed. Of course, nothing is perfectly beautiful, and for dreams that we don’t prefer, we call them nightmares. Beautiful dreams are the wishes of each person, hidden desires and visions that they themselves have not yet fulfilled. As for the nightmares, it is like the psychological stress that reality brings to us.

Events that are not fully perceived, dreams that are not seamless – many of us do not dream about specific events or people, instead, we dream about animals or objects, which are symbols, icons and we gradually have questions we want to find answers to. Some of us have dreams that are predictive. Scientifically, this phenomenon is called “Deja vu”. Nightmares come from real events, problems that you worry, fear, or even dare not face. But the moment you remember them or you have turned them invisible as an obsession, they will be written to temporary memory.

The reason for calling these are temporary obsessions is because if we connect with the Ten of Swords Deviant Moon Tarot – the next transformation, we understand that the cycle will repeat, that is, the nightmares will come, just they are different in appearance but not in essence. Their job is to make you feel panic. And the worries are being so overburdened that they are creeping into your dream.

Returning to the image of the Nine of Swords Deviant Moon Tarot, the small demon springs upon the woman’s shoulders, his hands like a little snake, wriggling, injecting poison and thoughts into her. The symbol of the snake mentioned in card VI. The lover and XXI. The World – concerns to the point of obscuring the mind. In addition, the image of the cat is mentioned as the symbol of witchcraft and magic – the hauntingly flickering obsession with no escape. That woman is gnawing at her inexpressible worries, scandals, rumors, slowly destroying herself little by little.

Get out of that state if you find yourself in Nine of Swords Deviant Moon Tarot. You are exaggerating the problems. Snakes are also a symbol of health, please pay attention to improving the body’s resistance before experiencing mental disorders. The simple logic is that as your body weakens, nightmares also knock on the door more often. From another perspective, stealth, secret affairs, temptations are still lurking. Evaluate the connection between you and your current partner. The moonlight fills the blanket covering the woman, are there hidden secrets here? Ask yourself about whether to put an end to shady, dreamlike, unethical practices.

Nine of Swords Deviant Moon Tarot is a card of fear, nightmares, and negativity. However, The troubles indicated in this card are primarily of a psychological nature and do not necessarily indicate suffering in your external reality. It is something inside your mind created by despair and anxiety, regardless of your actual circumstances. Your experience of the world has been greatly influenced by your expectations, desires, and concerns. So you create your own world, and your attitude determines how you experience it.

Nine of Swords Deviant Moon Tarot also reflects the fear of the future, or what might happen in the future. If you allow yourself to be attached to them, you run the risk of creating a negative reality for yourself when you have completely believed in that fear. Your nightmare becomes your prophecy, and obviously not the desired outcome.

In general, this card is a sign that you are overly worried about a situation. You are always restless at night because you are really anxious about a particular issue. Maybe you are overdoing things, and if you look at the situation more objectively, you may realize that things are not as bad as you might think. In fact, worry and disappointment are what makes things worse, so instead of fretting about it, try to change it.

Although most people feel fear, disappointment, and uncertainty at some point in their life, you should not allow negative emotions to prevent you from pursuing your goals with enthusiasm and hope. Always anticipate future challenges, and train your inner strength to adapt to the worst possible situations.

Nine of Swords Deviant Moon Tarot can also indicate that you are being harsh on yourself, blaming yourself, and getting angry that you have made every mistake that led to failure. So, when Nine of Swords appears in a Tarot spread, ask yourself why are you so hard on yourself, and how do you loosen or what is the source of depression? What can you do to feel better? Make an effort to get rid of self-blame and keep on the road ahead.

Keywords and extensions: An improved appearance, Good health, Despair, Severe depression, Torment, Hope, Good news, Unfounded worries, Loyalty, Trust, Promise, The help in the future, Termination of suffering, The time of stress and anxiety over, The dawn, Helpful feeling returned, Beautiful dreams, Nothing to worry about, See the light at the end of the tunnel, Time to heal wounds, The nightmare is over, Harsh, Isolated, Constant pain, Loneliness, Sorrow, Bondage, Slander, Loss of relatives, Suicide, Death, Imprisoned, Go to the hospice.

The upright Nine of Swords Deviant Moon Tarot is the sleepless anxiety because your thoughts are frantically spinning around in your mind. In reverse, it indicates that you are becoming extremely stressed and excessively anxious, in fact, this is not a complicated issue. You always exaggerate things without pausing to check the reality. Get back in balance and realize your fears and do everything to minimize their negative effects. Please believe that everything will be right on track again.

The reversed Nine of Swords Deviant Moon Tarot also claims that anxiety and despair can actually harm you. The more you worry about something, the easier it will be for you to turn your nightmare into reality. Take a deep breath and realize that life is not all gray and the more anxious you are, the more harm you do to yourself.

It can signal that you have passed a period of anxiety and depression and are getting better. You may have realized that things are not as bad as you might think, start relaxing and calm down. Or maybe your dreams are trying to say something. Try to analyze the messages hidden in them!

IV. The guideline of Nine of Swords Deviant Moon Tarot

Nine of Swords Deviant Moon Tarot talks about finding yourself in a predicament that is largely due to your own causing. And while it can be hard to admit, avoid responsibility for something you have created yourself will only aggravate your problem. This card is sometimes referred to as the “nightmare” card. It indicates the anxiety and fears we experience when we wake up from a bad dream. And when we are confronted with a real-life situation that has brought about the nightmare rates, it can be just traumatic.

There is a sense of foreboding in this card. The woman awakes from a nightmare, frightened by what she saw. The monster nibbling on her shoulder and whispering in her ear wildly makes it all more threatening. But you will find not facing your demons just makes them more unbearable.

Nine of Swords Deviant Moon Tarot is bizarre as it forces you to face your fears. There is not much hidden or avoided as cases in your life, just put them right in your path. You may have to remind yourself that it is never as bad as it seems; That it was just a nightmare and that everything will get better with the dawn of a new day.

Nine of Swords Deviant Moon Tarot has a special resonance with the Middle Ages because it represents the plight of a lonely woman in the world, in centuries when women have no personal rights, inability to inherit property, defend themselves or use their laws. We often see her sitting on a bed crying, grieving and afraid of being left out of hurt, wondering what will happen to her now when her guardian (father, brother, husband, or son ) is no longer there.

The swords surround her might indicate that the loss occurred due to some devastating conflict, the result of the fight leaving her left as a booty of war. What we are looking at is the cost of pride, which produces losers as a side effect of honoring winners. The woman in the picture represents the worries of the heart, the damages of the soul, and the vulnerable when the ego-mind becomes so invested in control and domination that it does not take into account human prices. A sensitive, delicate, sincere approach to nature being trampled and thrown aside to cater to the reason in which the winner has it all.

Nine of Swords Deviant Moon Tarot advises you to face your fear of being alone and acknowledge different limits you may have placed on yourself for that fear. In the name of safety, you may have adhered to lower standards than you would be able to achieve. If so, you may have resisted the attack on your own.

Perhaps you have bargained for creativity and joy to avoid being challenged. These types of tradeoffs never work. This may be your time to cut your disadvantages. If so, realize how much time and energy you have sacrificed for a lifestyle that does not suit you. If you can do this, you will look back at this moment in life as a turning point. This can be an opportunity to heal when you are relieved of the burden on you.