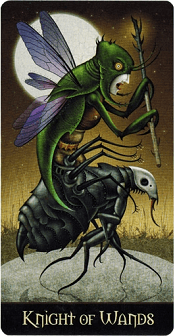 I. The Description of Knight of Wands Deviant Moon Tarot

The Knight of Wands Deviant Moon Tarot bravely plunges through the meadow, ready to face all the challenges that lie ahead. He hardly realizes that his overly aggressive and impulsive reactions to life are the cause of the struggles he encounters. He wields a thorned stick representing his weapon, rides on an iron-armor bug, his face expression burning with fervor. He is ready to take on whoever gets in his way, sturdy green armor and wings are what he equips himself in this battle.

Nothing around seems to matter, Knight of Wands Deviant Moon Tarot is determined to pursue his goal to the end at any cost. His courage is immensely powerful and he is not afraid of anything. He simply calculates things based on his ideas and visions to execute the plan. As a result, he shows that your confidence level will quickly increase and you feel ready to conquer the world with your idea. Solve any challenge your way and always be ready to help those who lack determination and are in trouble.

While Page of Wands is the initial sparks of a new idea, Knight of Wands Deviant Moon Tarot shows the practical pursuit of that idea. There is considerable action involved in this Knight and he has a real commitment and energy to make sure his idea is put to work. This is an act-right-away card, like a guy. He is impatient, impulsive, and loves action.

The downside of Knight of Wands Deviant Moon Tarot is that while bursting with energy and enthusiasm, he tends to act without considering his consequences. He sets out in a hurry and doesn’t have a clear plan. This can negatively affect your chances of long-term success. He is so focused on fame and glory that he forgets to plan and keep his vision realistic. Knight of Wands is sometimes overly aggressive and ambitious. He is extremely steadfast even when people protest and criticize him.

When drawing the Knight of Wands Deviant Moon Tarot in a spread, start your creative projects with passion and energy, but don’t forget to give a comprehensive, realistic, and balanced view, with a well-planned strategy, ready for any future consequences. You have to set your ambition and go wherever it works. There is nothing wrong with being ambitious if you use it the right way. Go ahead and take calculated risks.

Knight of Wands Deviant Moon Tarot can quickly and unexpectedly indicate an event that imposes upon your life. Especially when it comes along with the Eight of Wands, you will see so many changes and actions happening all around you, and will be swept up by the rushing currents of energy, whether you like it or not! You also need to pay special attention until it’s all over. Don’t be against it, just focus on it. Usually, the Knight of Wands signifies a hasty change in place of residence and work. You need to be ready to react quickly and go with the flow.

The reversed Knight of Wands Deviant Moon Tarot indicates delays, disappointment, empty hands, and feeling angry by obstacles and rejection of what you want to have. This card, in the reverse position, denotes the loss of power or the use of power in a negative way. It may show that you are attempting to disguise or that your compensation is incapable of controlling the condition. The accompanying emotion can be related to a loss of self-esteem and pessimism.

The reversed Knight of Wands Deviant Moon Tarot is impulsive, restless, impatient, and lacks foresight. He just goes after his own interests or decides things so quickly that he doesn’t really consider the possibility of success or its consequences. You need to be careful not to rush into things without thinking of the outcomes. Even if you are frustrated for not taking action, you need to thoroughly calculate before doing something. If this is someone in your life, it is best to guide them effectively in the future. They need to make mistakes in their life to learn and improve themselves; Do not control or stop them at this point.

The reversed Knight of Wands Deviant Moon Tarot implies that you run the risk of becoming careless, doing or saying things you later regret. You want things to be fixed immediately, and everything should go as planned, but you don’t seem to give yourself time to think about what’s best. Don’t immediately react when things happen, just examine calmly before you act. You feel frustrated that some factors are affecting your plan that you have no control over. Remind yourself that there are things you can control and change as you want.

IV. The guideline of Knight of Wands Deviant Moon Tarot

Traditionally, this card denotes the energy of an instigator, a lead person, an aggressive and excitable character who is responsible for attacking first and asking questions later. This energy quickly gets furious and prefers to fight so much that the thought of a diplomatic solution can cause a hidden disappointment! However, he finds himself trying to help, saving the world from its madness by imposing his sense of order on it.

His vices are bossy, paranoid, and prone to overwork. However, there are times when his energies are perfectly suited, like when his assertively protective nature is defending threatened treasures or interfering with dark forces. The approach is to keep a sense of balance as this Knight of Wands Deviant Moon Tarot unleashes his flames because he likes intense experiences and is always ready to take it to the next level. Sometimes, this kind of intensity is required, but on a daily basis, it is tiring.

Not only can you be clearly aware of the right path, but also have enough guidance to direct yourself. The necessary skills and resources are available to you and it is the right time to take action. In the beginning, you might be surprised how easy it can be, but don’t be fascinated by it. There will be comfortable stretches and there will be distinctly difficult ones.

Knight of Wands Deviant Moon Tarot recommends that you alter your self-image to get a sense as a character of the action. Regardless of your model in the past, you can completely set yourself on the path towards the future.