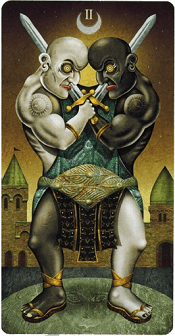 I. The Description of Two of Swords Deviant Moon Tarot

Two mighty swordsmen of equal capacities are in a deadlock. They rest for a while before continuing the fight. After a new thought of Ace of Swords, another new thought follows. That is exactly what Two of Swords Deviant Moon Tarot means: dilemma, inconclusive, confusion, and indecision.

What we need to understand here is that no matter what decision we ultimately make, we need to be ready for the pain because it is all ours and affects us. Don’t expect a win-win situation in this case. Like the two swordsmen fighting, they are equally capable and want to defeat the opponent at any cost without realizing that they are a single individual. It can be narrow vision, stubbornness, multi-personality, or sometimes due to too careful analysis that has brought us to this situation. If we concede this, it will be easier for us to make decisions.

Two of Swords Deviant Moon Tarot reveals difficulties in choice and decision-making. The two men are equal in a battle, and although difficult, their next decision has to be made to produce the outcome of the battle. So the presence of Two of Swords indicates that you are facing a tough decision but you are trying to hide and fool yourself and others that if you ignore it long enough, the solution will automatically appear its way. However, things will not be that simple. Your conscience will suffer for escaping from solving the problem.

Two of Swords Deviant Moon Tarot serves as a reminder that life decisions can often be difficult and the consequences are also extremely painful. However, consider carefully and make the best conclusion for yourself, as well as be fully aware of the possible consequences. Avoiding only creates a bigger conflict.

This is also a sign that you are lacking the information needed to make the right choices at this point. You may be missing something, such as a potential threat or warning, alternatives, or important piece of information. Once you can remove the blindfold and see clearly what happened, you will be able to define your path. Look for a variety of options, solicit external feedback, and ask yourself what is missing. Why is this decision so difficult to make? What more knowledge do you need?

The balance of the two swords reflects the need for greater balance in mind. You should temporarily abandon conventional ways of thinking and begin to consider other ideas and perspectives. You also need to weigh the pros and cons of both decisions and examine other options at the same time. You need to either compromise or just let it go.

Two of Swords Deviant Moon Tarot often represents a stalemate with no winners or losers. You may be at odds with others and not understand their point of view. A truce is essential so that you can both get to know each other’s cases, before coming to a final solution. Hence, this card not only signifies a possible conflict through a standstill but also denotes peace through this truce.

Likewise, Two of Swords Deviant Moon Tarot reflects hesitation and deadlock involved in an important issue. There are too many things to disregard. Make a decision or get a point of view so things can go on. In a spread, it is sometimes advisable to draw two more cards to complement Two of Swords. This will clarify the things you are trying to balance out or decide. This may also distinguish two alternatives from which you are trying to prefer.

Keywords and extensions: False, Deceive, Treachery, Overloaded information, The deadlock has passed, The decision is made, Movement, The change, Able to decide, Release, The initial consequences of a choice, Resume an activity, Reveal, Face the true feelings, Emotional expression, A chain of reactions.

When the Two of Swords Deviant Moon Tarot is in reverse, it suggests creative disagreements that can lead to the perception that two foresight are better than one. You have the ability to create synergy or at least provide a common ground where each argument prevailed. That is exactly when you think you are absolutely right and that you most need someone else’s point of view. Instead of thinking you have all the answers, get input and feedback.

The reversed Two of Swords Deviant Moon Tarot shows you are stuck and making a decision is extremely difficult at this point. You are really struggling to find the right choice. Identify the pros and cons of each option and consider what would yield the most favorable outcome.

The reversed Two of Swords Deviant Moon Tarot can also indicate disturbance when in a prolonged information overload. You are exceedingly confused by the views of others as well as detailed information about the options available. But in the end, you still have to make a decision. Sift through the handy advice and information to find the most useful choice.

The reversed Two of Swords Deviant Moon Tarot contradicts that you are feeling trapped in the middle of a fight on both sides. You try to play the role of reconciliation but inadvertently make things more stressful. Think about whether you really should make up and, if so, whether the conflict can be resolved. If not, get out of that chaos!

IV. The guideline of Two of Swords Deviant Moon Tarot

Two of Swords Deviant Moon Tarot represents opposing ideas or visions. These must be dealt with by communicating to go to a place of harmony or to complete strategic negotiations. Mixed signals dominate and while they may appear to try to communicate, opposing sides are completely absent from each other, which can lead to serious consequences. In the best case, a frank discussion would clear the atmosphere and serve both sides, but one cannot expect that in all cases when this card comes out.

Two of Swords Deviant Moon Tarot advise that this might not be a good time to make a decision. Don’t allow others to push you beyond your boundaries nor allow yourself to act impulsively. You need to fully deal with the situation before making any moves – even if there is no immediate solution when you want to induce stress. Be patient! There are cases where it is better to act rather than being in a passive position. However, this is not one of them. Keep as quiet as possible and let everything settle down. A little meditation can help you gain more objectivity. You don’t have enough information, as all the evidence has yet to be given.