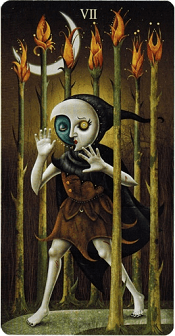 I. The Description of Seven of Wands Deviant Moon Tarot

On the Seven of Wands Deviant Moon Tarot card, there is a child who has been lost in the bushes for days. But beyond all adversity, the child finally finds the way that will lead him home. Seven trees bloomed to mark the end of the challenge for the child had come.

This child’s face bears two halves of the moon and sun. You can be awakened or directed at any time, whether it is night or day. This child’s posture seems bewildered and he runs unconsciously with wounds on his arms and legs, which also means he is confused, unclear about his stance, and loses his control. However, he escaped from seven trees with thorns hurting him, leaving behind a dark night and a fanciful moonlight.

Similar to the Five of Wands, Seven of Wands Deviant Moon Tarot shows a struggle after getting the first gratification. This time, the struggle is aimed at maintaining your position as the top performer as others compete and fight for your success. Thus, the competition is raging and you have to continue to prove yourself. If your efforts and achievement are praised by everyone, competition and challenges are inevitable because everyone wants to be like you.

Seven of Wands Deviant Moon Tarot can also indicate a challenge to the continued progress of an innovative business or project. When it appears to block your way forward, you can overcome it all with strong self-confidence, and endeavors to continually improve yourself.

You need to stand your ground firmly and defend your position at all costs. The waves will make you lose your courage and perseverance, but your strength and determination will still be there. You see yourself as a warrior who is not afraid of hardships and still has the will to stand up and fight to the end. So even though you are experiencing some setbacks at the moment, you need to keep fighting for what you believe in and facing any objections or threats from others.

But you may not always be the winner. There will always be objections and contrasts to your point of view, and you cannot please everyone all the time. Don’t accept any compromises or negotiations at this point, take your stand with your resolve and courage.

Seven of Wands Deviant Moon Tarot says that you will have to give a speech or write an article on controversial issues. You have to be willing to defend your argument, and the current problems will reinforce your point. Enjoy this challenge as it will help you create an even stronger argument now.

The reversed Seven of Wands Deviant Moon Tarot reflects that you are feeling overwhelmed by the challenges and responsibilities in life, leaving you without an insight. You’ve made too many commitments and are now looking for an opportunity to focus on doing one or two things well ahead of you. You also feel that you are competing against or constantly comparing yourself to others, making you feel weak and vulnerable. Come back to the Six of Wands, build your self-esteem and confidence, and believe that you can achieve what you set out to do.

The reversed Seven of Wands Deviant Moon Tarot also points out that you feel that you are being judged and criticized by others. Your family or friends are questioning why you did that. You wish they could hold their tongues and leave you alone.

You are trying to avoid every possible conflict, and as a result, your opinion is shaken too easily. As soon as someone challenges or opposes you, instead of standing up, you compromise to keep quiet. You seem to consider being accepted and loved as more important than taking your stand. Also, maybe you’ve tried your best but now begin to realize it didn’t worth the fight. You may not be making the progress you want, and it’s time to let everything go and move forward. You will feel you are giving up halfway and you will realize your sanity.

On the other hand, the reversed Seven of Wands Deviant Moon Tarot indicates that you are going too far and too impatient in supporting your honor. This will adversely affect your personal relationships. Finally, it states that you are in danger of being attacked surprisingly. You feel insecure and unprotected by threats to your position. You get a feeling of falling behind. Maybe you want to flee and cancel the fight. This card shows a lack of confidence, courage, and determination. You feel threatened, and you can easily be manipulated and used.

IV. The guideline of Seven of Wands Deviant Moon Tarot

The Seven of Wands Deviant Moon Tarot often portrays someone who is almost always successful at doing his own thing in the world. This is a truly gifted person and usually takes the lead. This person sets the standards and gives examples that go beyond previous notions of what is possible.

In the history of the Tarot, this person will most likely be described as an admired and feared warrior who defeated his enemy at all odds. Such a stellar track record can easily be applied to the media, political, or business worlds.

Beware of the presumptuousness that may be hinted at by Seven of Wands Deviant Moon Tarot. Success doesn’t make you invincible, and it doesn’t protect you from mistakes! Enjoy your victory and then go back to your quest, otherwise your head will swell, damaging your ability to succeed again.

Seven of Wands Deviant Moon Tarot let you know it’s time to get top performance. Even if you are somewhat unprepared, you may want to go beyond your usual limits, think bigger, and adjust to your competitive nature. The time and effort spent preparing can pay off. Overcome challenges of rhetoric and speech. Now might be the time to prove what puts your head and shoulders above the rest by showing it in action.