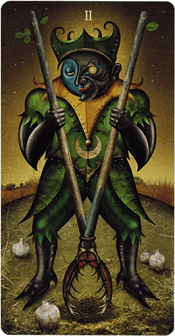 I. The Description of Two of Wands Deviant Moon Tarot

The Two of Wands Deviant Moon Tarot depicts a man, perhaps a farmer, who is strong wearing a green cloth and using a tool that seemed to dig the soil to plant nearby sprouts. The farmer starts planting in the land. He takes advantage of the potential of two sticks and combines those two energies into one. With this excellent and innovative tool, he is able to dig the first holes with ease.

This image differs greatly from the standard of Rider-Waite Tarot with a man holding a globe with two sticks on either side, his eyes are out in the distance as a desire of discovering and expanding a new horizon and waiting for opportunities. The surroundings show that the lands around this man are full of weeds – pristine lands that are in stark contrast to the land in the middle, with the capability of the settler, the farmer innovates and uses his tools skillfully to farm.

The meaning of Two of Wands Deviant Moon Tarot still aims to explore and expand or wait for an opportunity, however, the author reminds us that to be like that, we must act, we have to put in the effort, and have to work. With the same land that is full of weeds, but some people will be bored looking at it while others will roll up their hands to plant and breed. For the same farming and breeding work, some people will stand on the spot while others have created a whole farm, that’s the need for “innovation and creativity”. This farmer’s tool can cut the grass and also dig the soil and sow seeds. The seeds that are about to be sown are your chance, luck, and success. Therefore, keep working hard and being creative, luck will come.

Two of Wands Deviant Moon Tarot is a card about planning and progress. You turn your idea into a workable plan that can lead to your success. It’s not an idea anymore but now you have a plan in place to ensure that your ideas are generated as desired.

It also talks about exploration, especially when you step out of your comfort zone, experience, and explore a new world. You have to be really brave to take the first step but this card gives you more confidence to try your best until the end result is achieved.

Two of Wands Deviant Moon Tarot shows that you will begin to look at your long-term goals and plan ahead for what you need to do to achieve success. You have tried until now, but you feel that everything is ready for a change and to create a long-term future. You might consider traveling abroad, taking extra classes, or changing your main job to broaden your learning and gain an external perspective. With careful planning and a calculated approach, you will reap much success in the future.

The number 2 cards in the Tarot generally represent the decision. In the case of Two of Wands Deviant Moon Tarot, you are wondering between either attaching to what you are familiar with or broadening your horizons and taking risks. You know that the world has a lot more big and meaningful things waiting for you, and you also realize that to take advantage of this opportunity, you have to leave your familiar territory. Even if you have invested heavily in your current circumstances to develop and maximize your potential, you are bound to step out into a new world and examine your options.

Just be patient and focus on your intentions. You’ve got off to a smooth start and are exploring your journey, so it’s time to patiently wait for your reward. It can be said that your ideas are starting to come true.

The reversed Two of Wands Deviant Moon Tarot shows you need to start organizing your long-term goals and prioritizing what is important to you and what you really want to achieve. At this point, you may be wanting too much, but you know for sure that you can’t get it all. So again, think about what drives you on the path ahead. Focus on your passions and start making a plan towards those goals.

You may be scared to set your foot in a completely unfamiliar place, although the potential is enormous. The problem is that your development is being held back in the current environment and the world has become too small for you. It’s time to pay attention to your original goal and understand the benefits and disadvantages of taking risks and entering a larger world.

The reversed Two of Wands Deviant Moon Tarot may also indicate that you’ve left out some major details related to your plan. Maybe things are going well until something unexpected happens. Either you are so confident in your success that you forget about the most valuable things or you may lose your passion and become easily bored and disinterested. It’s necessary to rekindle that passion or start over with something more inspirational.

IV. The guideline of Two of Wands Deviant Moon Tarot

The Two of Wands Deviant Moon Tarot in this suit often portrays as crossed wands, implying a stalemate due to energy working with various purposes. This can indicate internal divisions – perhaps a showdown between the positive and pessimistic parts of your mentality – or some situations where you feel like you’re in dilemma. This also can be a disagreement with another person or a conflict with restrictions currently imposed on you.

It shows the possibility of terrifying self-doubt – the kind that arises in a situation where one has bitten more than he can chew. Give yourself a moment to fully comprehend the meaning of your circumstance. Find your bearings again before starting over again. Deal with real problems now before they become regrets!

Two of Wands Deviant Moon Tarot recommend that you respect your own decision-making process. Instead of criticizing yourself for indecision, appreciate the various implications of possible choices. Avoid pushing yourself to make a commitment. Continue to reflect, observe the situation, and witness the forces at work. At some point, you’ll have enough information to see it clearly. The decision-making process will be over and the choice will be made clear.