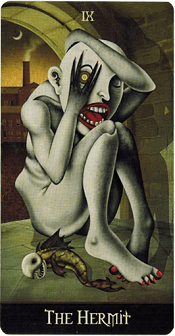 I. The Description of The Hermit Deviant Moon Tarot

The Hermit Deviant Moon Tarot evades the world in the corner. Although he locked himself off from the outside world, he was never truly alone. The bloated fish next to him is a reminder that we can never hide.

Over time, people seldom have to escape reality or simply because they want to find somewhere quiet to find a solution. Sometimes, this avoidance brings positive effects, but many cases of hibernation need to be awakened.

One of the details of this Deviant Moon Tarot card has evolved quite a bit from the original one. Instead of a pale-haired monk or the old wrinkles of time, the color of time is depicted naked on the human body in this card. In the original decks, The hermit is mentioned as a reclusive old male monk, but here the sex of The Hermit in Deviant Moon Tarot is not specified. That is the timeless style of Patrick Valenza. If he is not required to clearly describe the gender of the character, he will leave the reader to interpret it in his/her way.

The aging manifests through time, The Hermit has nothing on his body, as naked as revealed. The body is as thin as time has passed, devastating and destroying an entire body. One can only see a raw-boned body with visible ribs. Is the hermit choosing for himself to retreat or is he accidentally forgotten by the world?

It is surprising that if you take a glance, many people will mistake the expression on The Hermit Deviant Moon Tarot’s face as a sign of panic, but the truth is that the other half of his face, with an eye closed and relaxed facial muscles, is strangely calm. There are many theories that The hermit wants to show his knowledge and understanding but does not want to brag about it.

Here, a part of the light has not reached all and has not made The hermit open up all the mysteries within him. On the other hand, the hermit’s arm has somewhat tolerated that concealment. On some foreign websites, readers have asked questions and made assumptions: so what is the light in the end? Is it hiding in a dark corner and being exposed or simply someone opening the door, shining in that dark corner?

Many theories claim that it is the light emitted from the oil lamp of Jesus Christ. It was a picture of God knocking on the door and awakening each person behind that door as if they had forgotten something. This is depicted in Holman Hunt’s famous painting titled The light of the World.

One of the reasons leading to the theory of the light of God is that of a fish lying next to The Hermit Deviant Moon Tarot. Many people said that it was a rotten and dead fish. If you follow this deck from beginning to the end, the dead fish in Patrick’s style is a skeleton fish while the fish on this card is still fresh. So there is still a hint of life, a little hope. The fish is placed on the cold stone floor, the theory that this fish dead seems to make the most sense, however, it could also be a gift from the person who opened the door.

The fish symbol is mentioned as a symbol of the gift of God – Protestantism because one of the 12 apostles of God is a fisherman. Besides, the fish always swims to the left, which is why this fish turns to the left side of the card.

The next highlight is The Hermit Deviant Moon Tarot’s wide eyes and gaping mouth. Someone will find that those eyes widened in surprise, but the eyes widened to observe. An open mouth could be a surprise, a scream, or silence, wanting but not yet uttering a word.

There is a theory that Hermit is in a state of extreme panic, screaming, and escaping. But in the opposite direction, the other door might be about to close and The Hermit is looking to see if he is left behind, wanting to say: “Don’t leave me”, but still has a little hesitation. An opposing and contradictory state on his face makes readers more confused.

The next detail is the hand covering The Hermit’s right eye. Four fingers are cut in half. When in solitude, away from society and the environment, people are still haunted by the depraved temptations of the devil. The Hermit’s whole body is white, and when the light shines, his hands are gradually black. Toenails painted as red as the color of life – this red color has also been mentioned in The Fool Deviant Tarot earlier.

A doorway is open behind The Hermit. Loyal followers of Deviant Moon fully support the author’s great idea. Because if there is no back door, that means it is a corner, a suffocating secret, and then there is no way out for him – one thing that goes against the meaning of The Hermit.

You can feel this place as the dome of the building, where you can see and embrace all around life. The Hermit sits in the dark corner, to observe what is still going on in everyday life, to contemplate, and to judge. One of The Hermit’s hands holds onto his body so that he cannot be rushed out, and save his life. He wanted to find a quiet place to ponder but did not want to find death to free his life.

Before we step into the interpretation of this Deviant Moon Tarot card meaning about all aspects of life, let examine the meaning of the number 9. Certainly, each zodiac corresponds to a certain number. And number 9 is denominated Global Awareness with the astrological correspondence of Virgo. Jupiter’s image is intertwined with red and white streaks. This special figure partly explains why the author painted The Hermit with intertwined lines of red white. The astrological correspondence of this card is Jupiter in Virgo.

Going back to the number 9’s secret, miraculously, if you multiply 9 by any number and plus each number of that answer, you get 9.

The number 9 is the largest of the 1-digit numbers.

While the number 6 represents love – The Lovers, the number 9 is the reversed image, representing a large world. When the number 9 appears in the circle, that leads things to its end, like closing a circle or a journey. Either you will finish the trip or you should prepare for the next one.

II. The general meaning of The Hermit Deviant Moon Tarot

The Hermit’s challenge is being able to spot a teacher in a modest disguise. This mysterious font of knowledge will not help a student easily acquire his or her intellect, as it takes time and long contemplation to understand what he knows. He often spoke wordlessly, or in ancient and barbaric language, communicating with elements, animals, and nature.

While the hourglass was the defining feature of the early Hermit Tarot cards, the more modern cards have transformed the metaphor, revealing more or less light coming from his lantern. In both cases, the Hermit card reminds us of the value of time away from the chaos of civic life, to loosen the ego in communion with nature.

III. The reversed meaning of The Hermit Deviant Moon Tarot

When the Hermit Tarot card is reversed, you may be against progressing towards a level of wisdom that makes you outstanding. Your fear of the road haunts you; it can be fear of loneliness.

Try to remember that the shamanic method of dealing with your fear is relaxation and openness. Let them in and allow them to have their way for a while. This way, you know them fully and will see them pass by as you please. When there are no more surprises, you can move to an empowered place of action.

IV. The guideline of The Hermit Deviant Moon Tarot

The Hermit Deviant Moon Tarot recommends that you think through everything. Your requirements are so high that you have very little time for reflection. While you are gifted with understanding the larger meanings involved, you need some private time to consider the steps to be taken in the future. You cannot just lock yourself up in a room for fifteen minutes and expect pervasive solutions. You need more time and separation to assimilate and process.

Now might be the time for you to tell people to leave you alone. When you are completely ready, you will be able and willing to give others what they need.

Your life is tied to relationships, seemingly a bit opposite to the name The Hermit. But the truth is that your knowledge is hidden under that humble and timid mask. The more engaged, the more open and widen the hermit’s vision and knowledge.

Your finances are quite stable. If you are looking for investment or quick returns, the answer is to ignore it. Though The Hermit Deviant Moon Tarot can earn money, he is quite lazy to think or use it, especially when it comes to emotional matters.

Your career provides you with steady financial resources, but you do not have a chance to get promoted because, in your opinion, it is enough. You do not like competition and feel smug about your present circumstances.

There is no movement in relationships. You have a certain understanding, which should bring confidence as well as reliability in your circle of friends.

Legal matters will be resolved from financial matters. You also quite obey the law so things will be settled quickly without any changes.

The image in Hermit Shadowscapes Tarot card is almost analyzed in the companion book, a hermit holding a lantern in the dark, self-groping his own way.