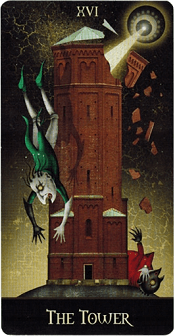 I. The Description of The Tower Deviant Moon Tarot

On the card, there is a lightning bolt from the sky that hits The Tower. Two criminals fell to death when the tower began to collapse. The abandoned tower has collapsed. After the temptation, people lose themselves, in pursuit of personal goals, when we accept compromise and live up to our own desires is when our image collapses in the eyes of others. Or when you realize what you have built up all the time suddenly disappears.

That may be the first thought of all readers or yourself when looking at this XVI Deviant Moon Tarot card. Going back to the history of it, this is one of the controversial cards, not by meaning but by the origin of the name and but actually, the idea that the creator of the tarot from the early times wanted to send into is completely different. Nowadays, with more diverse variations from many authors, along with many schools, the meaning and the desired message to be conveyed has been somewhat homogenous.

Turning back to the more practical feelings and thoughts of the individual level, let’s get into some details of the Tower Deviant Moon Tarot card. First of all, we must mention the main character of the story – The Tower. Why is it a picture of the tower and not another figure? Whether it is as simple as the image of a building, Why is it taking the same construction and with the same purpose to live and work, but the symbol of the tower always has a much higher meaning? Surely many of us still remember the significant September 11 event which went into the history not only of America but also of mankind. The reason, of course, is not only the killing and wounding of many lives, but because the tower is a symbol of belief and freedom.

Over the years of development, throughout the history and culture of each country, the tower was built and designed with different purposes. Before the 20th century, the tower was built with two main purposes, the first is to save space in populated areas and cities and create a private or professional working space, secondly, it was the symbol of reaching the height of wealth, materiality, and prosperity that Western countries aimed for. In addition, the tower is also a symbol of the religion and cultural development of each country. Whether in the West or the East, we see many images of towers associated with Christianity or Buddhism or some other religions or cults. Because of the high, comprehensive, and outstanding image is how people put their beliefs or hopes out of everything around them.

The image of the Tower in Deviant Moon Tarot is probably closest to the Bell Tower in Italy but has also been modified according to the author’s intention. As you can see, we are looking at the front of the tower. From the top of the tower, one can guess some of its structure, a hexagon on a flat surface which is too difficult to break. The hexagonal image is first evaluated and recognized from the hive of bees – an image that comes from nature as a model of time and hard work. Besides, the meaning of the hexagon is balance, connection, sincerity, truth, love, equality, harmony, persistence, reliability, and tradition.

In The Tower Deviant Moon Tarot card, this tower is absolutely built with a single entrance, there are very few windows here as protection and absolute shielding within it. Brown is the color of seriousness, the color of the earth, which means stability, discipline, and encouragement. The white roofs covered above as a pure meaning without any doubts about what has been built – the protection for absolute belief.

A thunderstorm smashed the roof, penetrating the contents of the tower, like a crack, illuminating and destroying the preserved contents. Many people will say they don’t refer to lightning, however, it is one of the comments of the author. And let’s move on to some of the hypotheses of other authors that are quite accurate.

There is a saying: a picture is worth a thousand words. The news came like lightning strikes out of the blue, one can see from the light that is knocking on the tower, it is a symbol like a pair of eyes looking directly at it. If this is the tower of thoughts and soul that you built yourself from within, the eyes are what contributed to the killing of that image. Many theories with demon eyes are that when you look at a problem and discover more details deep within it, you are also the demon that destroys your dreams. The eyes are also symbols of the soul, a projection of clarity, hurt, and pain. Although the tower had not been completely destroyed, it somewhat ruined the perfection that had been created before.

Two men are falling, but no one is falling from the tower. Two sinners, one plunging down with his hands outstretched as support, the other lying there but enduring fragments from the tower that were falling on him, the hands shielded from the pieces. Black and white hands, opposing, like trust and doubt at trade.

No matter who they are, whether it is bright or cold, it doesn’t matter if they fall down, because every sentence and belief is gone. Half a bread may be still bread, but half the truth is no longer the truth. Have you ever wondered, have you been stubborn and turned to blame others? It’s like the way you torture those around you, like sinners, like the people who helped build your own tower.

Fortunately, no one dies here. The ground in which your tower is built is still illuminated and filled. The people will get bigger, you will see things in more detail, and above all, you will build a taller tower, though not perfect, you will understand it better. The structure of the tower is also related to the Octagon, a symbol of regeneration for a new generation, infinity, rebirth, and transformation. The corresponding astrology of The Tower Deviant Moon Tarot is Mars in Aries.

II. The general meaning of The Tower Deviant Moon Tarot

Out of all versions of the Tower card, catastrophe is occurring or has just happened. Crazy and desperate demons are freed from the ancient sanctuary, and nature conspires with human failures to destabilize society. Volatility is both collective and individual. Let’s learn that these images were created for educated nobles and clergy – remind them that they would lose the most if the hierarchy was overthrown.

Lightning is a worthy compensation for the sins of those who gain good fortune from exploiting or abusing others. The modern tagline can be revolutionary, showing that through drastic social change, oppressed people can find new hope for a better era. The Tower Deviant Moon Tarot experience comes like a bolt of lightning to topple the hierarchy of the old order, after which everyone can have a fresh start on more equality.

Now it is the time to free yourself from the social constraints and false beliefs that hinder your advancement. The mechanisms of confinement must be broken before you can enlighten. The old order must be torn down making room for the new one.

III. The reversed meaning of The Tower Deviant Moon Tarot

The reversed Tower Deviant Moon Tarot card indicates that the drama is over. All towers are inclined, leaving behind the problems and emotions that caused this. Question yourself what you can do now when the options of your past are ended. When you get yourself together and start over, you’ll find new energy for your next attempt.

This card in reverse may also reduce the level or the impact of a change that is about to enter your life. You may be warned in advance or you may have an intuition that something significant is going to happen, and you can prepare a plan for avoiding this destruction. It is worth noticing that you should behave in a rational and unselfish manner, avoid unnecessary conflict, and control your big ego.

IV. The guideline of The Tower Deviant Moon Tarot

With the Tower Deviant Moon tarot card, just think that you are an agent of transformation. This self-sacrificing role has the potential to create stressful situations. Your vision shows you that a fundamental change has been unleashed by much greater forces than mere humans, and therefore you are no longer resisting.

Now you can take the lead, acknowledge, and accept the prepared presentation of an exploding future in the present. Try to mediate the harsher parts of the changes as they happen, so the people who are most vulnerable are the softest. Acknowledge yourself as the others in your life who are providing their resources to usher in a better future.

Your life is dominated by spirit and emotions, you always aim for stability in everything. However, this will sometimes cause delays or stagnation in some things.

Relationships are a great asset to you, so building an image and reputation is more beneficial for you. Still, you need to be careful of being too easy going or making too hasty and emotional decisions in your social relationships.

Spirituality plays an important role in your health. Regardless of whether you are healthy or ill, you are very confident and optimistic. Thanks to the attention of those around you at the right time, your illness has not changed seriously.

In terms of your spouse and romantic relationship, you have a lot of luck and advantages. When love is expressed through care, words of encouragement, you gain the trust and absolute affection of your partner thanks to your acumen in turning the situation around.

The Tower Deviant Moon Tarot metaphorically returning to Mother Earth is on an unspecified date. Everything comes quickly and unexpectedly. You also quickly grasp and prepare mentally, everything is going as gentle as possible for you.

You have many opportunities to travel or go abroad thanks to your support or financial stability. Short or long-term travel or business trips happen throughout your life. You are predestined to traveling and always have someone to support you.

Your career is stable and reaping fruit over time thanks to your previous acquaintances. Even though they don’t happen in the present, they will probably come with help from other relationships.

Your friends are emotional people, little in quantity but steady in quality. Even if disagreements sometimes arise due to emotional inertness and lack of progress in relationships, don’t feel frustrated or depressed as long and solid relationships are always needed time to build.

However, law-related problems stem from relationships, which can add up to occurrences over time without your knowledge, and to deal with them you also need quite a long preparation. The only plus is that you always have a strong spirit and confidence in yourself even when dealing with these unwanted problems.

The Tower Shadowscapes Tarot brings a sudden and unexpected change. In one minute you have it all and then it disappears. Therefore, we cannot fully grasp the literal images of the Tower.

The Tower Linestrider is a powerful card, a beacon of great change, riot, and even destruction. Along with that destruction is constructivism. The change will bring new opportunities.