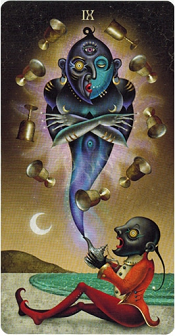 I. The Description of Nine of Cups Deviant Moon Tarot

The young man is amazed at the appearance of a slight mist in front of him. The genie in the bottle grants him a wish, while the nine cups form a mysterious energy circle.

The genie in Nine of Cups Deviant Moon Tarot has a third eye on his forehead, the fact that having more eyes than usual has an important two-dimensional creation to take note of. Other eyes often have a mental equivalent to the ability to see the future. Regarding a single eye, its meaning is two-dimensional: on the one hand, it implies ordinary people because one eye is less than two which are inherently similar to the standard form; but on the other hand, since its position is on the forehead, above the area originally reserved for the natural eyes, it seems to allude to extraordinary powers. The third eye image is also depicted on the forehead of the gods in ancient Buddhist sculptures. It is believed that the all-seeing eye has been given to the gods by God so that they have supernatural powers that can see through invisible objects. Indians often mark a point on the forehead between the two eyes to describe the third eye, which is the god eye, to see through what the naked eyes cannot.

Around the genie are nine cups forming a circle that resembles number 0 – the association of the sun. Philosophically and mathematically speaking, the number 0 represents nothing and also represents everything. These are the two infinity ends of the finite, neither reachable. Therefore, the number 0 is completely a mysterious symbol, indicating the level of mental or spiritual mystery that exists in each individual. When the genie appears with the halo from nine cups, our main character in the Nine of Cups Deviant Moon Tarot seems to have an available spiritual inclination that he should be aware of, because that is the potential to assist him in understanding more of life’s deeper issues, such as life goals, desires and aspirations, the power of thoughts, and the rebirth process.

The number 9 represents the integrity, completeness, or final stage of development. This final stage can present a number of problems. Experiences and coping methods become important and are an intrinsic part of the meaning associated with the number 9. Therefore, the Nine of Cups Deviant Moon Tarot shows a tendency to dream and enjoy the joys of life. You are spending a lot of time thinking about big ideas or projects for a more ideal lifestyle. Do what you need to do now to implement those ideas. While ambition is essential, you also have to put in your own energy to achieve success.

More generally, the Nine of Cups Deviant Moon Tarot reflects happiness in all areas such as health, finance, work, fortune, love, or relationship. After the difficult selections in Seven of Cups and the passivity of the Eight of Cups, things started to return to balance with the Nine of Cups. As one of the positive cards of the deck, the Nine of Cups shows satisfaction on all levels – emotional, physical, and mental. It is not unreasonable that it is called the Card of Wishes by many readers. The appearance of it is often seen as a sign that whatever your heart desires will come true in the next few days or weeks. This is the manifestation of a successful start.

In the suit of Cups, nine often refers to good feelings, such as romance in the relationship, generous friendship, or sexual life satisfaction. It shows that joy and happiness are within your reach. In fact, maybe you have them on hand already. This is the time to enjoy the dream life and the sublimation of emotions. Everything around you is perfect.

Nine of Cups Deviant Moon Tarot also says that your blessing has come, appreciate the good things life has given you. Begin or end each day by writing down the three things you are most grateful for. You will find that, over time, you actually have a lot more to be pleased with, and this contributes to your feelings of satisfaction.

Nine represents stability and advancement of the Cups suit. This Tarot card signals pleasure, well-being, satisfaction with what you have achieved up to now, and forms a solid foundation for the future. All worries have become the past and a bright future is coming to you.

The man in the Nine of Cups Deviant Moon Tarot has a surprised look on his face. This shows that, in reality, you are feeling unbelievable about what you have achieved. Don’t be too shy or humble about it! Be proud that your efforts have brought about worthy and fulfilling results. It can also express the lavishness and luxuries of life, including great food, nice clothes, fancy cars, etc. Of course, balance is needed to ensure that you don’t become lazy or greedy, but in general, this card shows that it is a time to enjoy rather than suffer the negative consequences of enjoyment.

Nine of Cups Deviant Moon Tarot is a card of satisfaction and desire, however, in the reversed position, it shows that you may be disappointed when your wishes do not go as expected. Your expectations may be unrealistic or you do not take the action to pursue this dream.

From a sentimental perspective, Nine of Cups in the upright indicates a great sense of satisfaction knowing that everything is operating as you want it to be. In the reversed position, you feel that something is still missing and that you have not really gotten what you wanted. That frustration can stem from mistakes due to being complacent, or overly indulgent, materialistic, superficial, self-centered, and indifferent to others. Nine of Cups Deviant Moon Tarot in reverse points out disorders stemming from depraved lifestyles. Be careful not to overdo sexual pleasures, instead, you should try to regain balance and moderation in your life.

The reversed Nine of Cups Deviant Moon Tarot shows that you are achieving what you think you need, but it is not what you really want. The flaw may not be the thing itself, but the surprise that your dream coming true doesn’t make you feel as you expected. This is an essential lesson in life. When you set your goals, make it clear how you want it to feel in your life, not just what you want to be, do or have. You will gain more out of your performance if you continue it in this way. It also talks about greed and lack of concern for others. You don’t care how others are affected by your actions and feel gloat over their misfortune. Pay more attention to other people’s feelings before you boast anything.

IV. The guideline of Nine of Cups Deviant Moon Tarot

Nine of Cups Deviant Moon Tarot is also known as Victory. Pictures on some versions of this card usually show a hostel owner doing his business swiftly and feeling very great at it all. However, the rewards of high performance are not all about money. This happiness also refers to a sense of fullness that comes from serving well to the community and supporting families, as well as gratitude for all the blessings in one’s life.

Nine of Cups Deviant Moon Tarot recommends that you should be open to the circumstances around you. There may be no need to manage a situation that does not require a lot of control or leadership. The tone of the moment is sincerity and attachment. Be responsive and receptive. Proceed from your heart and rely on your intuition. This is your most reliable source of information right now. Allow yourself to be drawn in by what feels supportive. Avoid feeling harsh, critical, and judgmental. If this requires you to change your style, so be it. The result of being intuitive in general is much more productive than the result of protecting your emotions and being too rational.