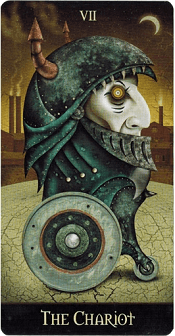 I. The Description of The Chariot Deviant Moon Tarot

The Chariot Deviant Moon Tarot is ready to travel across the town. Overcoming adversity in his past makes him strong, and now he is using those experiences to move into new lands. After a love adventure, it is time people need to grow up and that is when you have to go to the arena of life. This is also the reason that partly explains the appearance of The Chariot in the seventh card in the Major Arcana.

A chariot is a vehicle drawn by animals (mainly horses, so it can be called a carriage). The most primitive and simple, used in war as well as in peacetime, is the most important means of many ancient peoples. In the premise decks, the image of the chariot is frequently described based on its name, only with Deviant Moon Tarot, the image has been personified a lot.

In the Tarot De Marseille by Paul Marteau, The Chariot is described as the man sitting on that carriage, with just a little notice, you can see he is The Lovers in the sixth card. He seems to be a little more grown, with a gold crown, a wand, a blue armor, and a red tunic, one sleeve is yellow the other is red, the two shoulder epaulets have faces that, if you pay attention, they are the two women faces in the previous The Lovers card.

The shoulder epaulet on the side of the yellow sleeve is the old woman of reason and virtue while the one on the side of the red sleeve is the woman of passion and temptation. The carriage in which he sat has apricot color, with four pillars: two blue pillars at the back and two red pillars in the front. Two horses pull the carriage, although looking in the same direction, but the red one pulls the carriage to the left while the blue one pulls to the right.

The two abbreviations on the badge on the front of the carriage are S.M, which we can deduce from the French is Sa Majeste (Emperor) or as it can be understood from alchemy – Soufre et Mercure (sulfur and mercury) – the two fundamental elements of the great Dharma process that the alchemists are aiming for.

The Chariot Deviant Moon Tarot dressed as a warrior, helping himself not be hurt by anything. His eyes are sharp like a falcon, open wide, and constantly watching in the dim darkness. The iron helmet is adorned with six-pointed teeth like shark teeth – an aggressive animal that focuses solely on its prey. Can you see that Chariot’s head has two horns like two steam pipes and the whole body like a machine pushing himself forward? In a moving position, people will look from left to right, which is why The Chariot points his face and direction of movement to the right.

As noted above, The Chariot is personified. There are no more horses, but now the human and carriage become one – a way to modernize the image of The Chariot Deviant Moon Tarot, at the same time as the author’s implication. Instead of controlling two horses with two colors showing the opposite, infidelity, requiring talent from the rein, everything is now in the initiative of The Chariot. With no more horses, this warrior completely understands the situation and the direction he wants to go.

The warrior cowers in his armor or takes a fighting stance, or chooses to defend. The reason for this is because the wheel is as big as Chariot’s shield. On the shield are 5 dots: 3 dots to the left and 2 dots to the right. These dots are reminiscent of Three of Pentacles and Two of Pentacles – it is time to decide on new projects but there is still hesitation and uncertainty.

This Deviant Moon Tarot card also means that the hero overcomes his barrier and takes action. The two horns can also be understood as two swords symbolizing the barrier, which are now eliminated. The knight walks on the barren ground, ignores the capital behind, and continues on new journeys.

Corresponding astrology of The Chariot is Moon in Cancer. You will easily remember this when you see the moon and the helmet covering the face of The Chariot is the crab crank. The color of the outfit reminds us of something mossy but the sparkle of stars.

The last thing is the intentional randomness of the number seven. The Chariot Deviant Moon Tarot is placed at number seven and let’s try to make sense to explain what this number means. Number seven in astrology also corresponds to Cancer.

In the East, number seven is associated with the concept of the lunar month as the month of soul, the burial of the coffin into the grave, and the amnesty of the dead while in the West, the number seven means luck. Besides, it also has a symbolic meaning for spirit, intelligence, analysis, concentration, introspection, fondness of learning, intuition, knowledge, contemplation, righteousness, perseverance, subtlety, grace, and inner wisdom. The negative meaning of the number seven is also separation, distance, sarcasm, difficulty from the outside, melancholy, cowardice, concealment, and retreat.

II. The general meaning of The Chariot Deviant Moon Tarot

The Chariot card aims to a triumphal feeling of freedom as if the Charioteer is marching through the streets as a hero (or heroine). It reflects congratulations for high performance and is a sign of empowerment.

Huge wheels and mighty steeds increase the speed at which the Charioteer’s power can be applied. This kind of charge makes the world more accessible to someone ambitious enough to grab The Chariot’s reins. But there is a risk in this sense of freedom, because of the increasing rate of change and its power to overstate mistakes in judgment. As a seasoned fighter, the Chariot is required to pay close attention to the road ahead.

III. The reversed meaning of The Chariot Deviant Moon Tarot

When this Deviant Moon Tarot card is reversed, it suggests that you can falter knowing you need to take the reins and take responsibility for setting up your life.

You know you can drive change, but you have not chosen to move towards it yet. You can hold back for what feels like good reasons, but nothing is being imposed on you; you still have other options. Recognize your inner resistance instead of blaming the situation.

IV. The guideline of The Chariot Deviant Moon Tarot

The Chariot Deviant Moon Tarot recommends being prepared for changes that could include moving houses or opportunities to travel. Charioteer moves gently and always opens up new experiences that change with every valley or mountain pass.

You may be asked to live out of a suitcase and look anywhere in your home for a while. Accept new people entering your life. Most especially, become more fluent and experience the joys of freedom. The Charioteer is nothing if not self-sufficient. Be ready and free-standing for the changes that will sweep in and take you with them.

About your life, you tend to be emotional, but you are always stagnant, overly confident, superficial, and mentally insecure. About the journeys in your life, all trips are prepared in advance and happen naturally. Emotions after each trip also come quickly.

In your career, you will go forward with your efforts. It takes a long time but will bring you a certain material. Issues related to the law: only happens when there are money and material problems but are resolved on the emotional aspect because sometimes you are quite clingy so everything is also settled smoothly.

The Chariot Shadowscapes Tarot represents the best things to come. You can reap the fruits after many years of planting seeds and freely enjoy the performance you have made so far.

The Chariot Linestrider does not hold the reins, the horses are not bound, they are oriented through willpower and balance. Chariot represents a struggle – from within and outward.