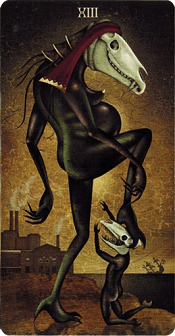 I. The Description of Death Deviant Moon Tarot

“No one wants to die. Even people who want to go to heaven don’t want to die to get there. And yet death is the destination we all share. No one has ever escaped it. And that is as it should be because Death is very likely the single best invention of Life. It is Life’s change agent. It clears out the old to make way for the new” – Steve Job.

On the Death Deviant Moon Tarot card, there are two bodies of a mother and child standing on a polluted shore. The child tries to return to the mother’s womb, but its efforts are stopped by the mother. Another baby will be born. Death is always followed by rebirth.

The gloomy and smoky atmosphere of the industrial factories was described. The sleek body of the pregnant woman increases the creativity and hiddenness in the viewer’s thoughts. Of the 22 main hidden cards, only card number 13 – Death Deviant Moon Tarot has no name. It’s not that the author can’t name it, it’s just a part of life without naming it, we all know it’s present in our lives. The day you were born is the day you light the candle of your life until it fades.

Many readers are interested in the creative image of Death in Deviant Moon Tarot because it serves as a motivator for people to think more positively. But in the end, it was simply a comfort to those who stayed. Because death is never a good thing. All have to look at the truth, mentioning Death, it is a loss, grief, and permanent end. Just like in love, compared to the breakup, the fact that the person you love suddenly disappears completely in this world is even more painful.

It’s an emotional connection between the two images. Even though the whole world turns its back on you, Mother is behind. What do you think about having to kill your child? It is much more grievous. The pain suddenly seemed dead, so what about a prepared death? It was no longer pain, but like a smoldering wound – an acceptance and pain that was chosen.

In some interpretations, it is stated by the readers that the mother steps on the baby to welcome the new one to be born. Speaking of which, as a gentle suggestion, we can avoid using the word “stepping on” the child, because the choice is inherently unpleasant enough. In the short commentary booklet of Patrick Valenza, the author does not use such an intense verb. The exact meaning of this action is that the mother is trying to hold the baby back because that hyperactive child wants to return to its mother’s womb.

Let’s talk a little bit about a personal emotion, like a child’s selfishness. The older children in the family must have been a few times uncomfortable with their siblings because of their presence, simply because they had to share one thing, which is their Mother. From the moment Mother was pregnant, it was a delight and curiosity, like that hyperactive child, they wanted to know what was so strange in that big round belly that grew day by day and was cared for by Mother every day. They also want to get in there, hugged and patted by Mother. They don’t have to live anymore and don’t have to worry anymore. But whatever, it’s okay until it comes out. Mother is no longer interested in them as before, she is only interested in that new life. They feel abandoned and no longer present in Mother’s eyes. But fortunately, they still live, even when their younger siblings are born.

A fact that we must accept, that is when the new baby is born, is also when the other baby ends his life. The Mother smiled at her child because of his mischievous hyperactivity, if it was a decision of fate and departure was a liberation, the Mother would be happy and let him go. The reason for departure is as liberation is because, if you pay close attention, the surroundings here are full of smoke and dust, by the dirty ocean with a black color of oil stains – a capital with the mark of decline. In the distance, the boat is sinking into the cloudy ocean.

The author makes no promises for the fetus, people only see it as a sign of revival, of life. But in fact, the image of both the Mother and the child is a skeleton, two “corpses” as humane as possible. A general implication for the passing away or a reminder of each person’s cycle of life and death. Death will be born again as the law of life. Death comes as a rebirth.

Briefly about meaning once again, a pre-active self-preparedness (the Mother) for the end of something or thing, though unpleasant and painful, is for welcoming one new thing. The corresponding astrology of the Death Deviant Moon Tarot card is Mercury from Scorpio.

Death Deviant Moon Tarot card is not about the literal death of anyone. It could represent the death of something else, like a project, plan, or relationship. This card also indicates the time of the harvest, symbolized in classic decks of the skeleton with the scythe. Unless the summer harvests fruits, and in winter loses its severity, people do not eat. When the scythe cuts the rope that connects us to the past, it frees us to move forward without fear because we have nothing left to lose. Everything cut off is recycled for the fertility of the future, so that nothing is really lost, regardless of the seasonal cycle of gain and loss.

In the more modern Tarot decks, we see Death riding on a horse and wearing black armor. The emphasis in these decks is on the punishment of sin, as in the medieval Plague on which the figure of Death is based was used to explain God’s wrath. Fortunately, in modern times, we are not too attached to such a sinful philosophy.

The reversed Death Deviant Moon Tarot card shows that you can expect to cut the rope, but unfortunately you have to persevere and endure without ending. It’s not time to end and close the door. Be patient with your current circumstances without accepting negative outcomes. Upcoming changes may change the way you feel about the status quo. Remember that harvesting does not start until the fruit is ripe. Work to become wiser, more mature, richer, and more nourishing, and your release time can happen earlier.

The Death Deviant Moon Tarot card advises you to separate from the old system. You may want to close the account, complete unfinished missions, and collect your harvests. The time has come to move on. If you cut off the ropes that bind you to old ways and outdated conventions, you can free yourself to join the next wave of light. This is not an excuse to deny others or hurt them in any way. It is simply time to work towards your ultimate benefits. Don’t let nostalgia and languishing loyalty hold you back. Be ready to go over whatever it takes to get where you really want to be.

Your life revolves around daily relationships and not much change, sometimes it’s a bit boring. A few happenings do not affect you much, you can easily lift up your spirit, facing and solving the problem is your plus point.

You do not hold much material in your hand yet do not lack anything. Your fortune and career are not so great, but enough for you to be hoarded and secure. Everything is just at the moderate level, an invaluable asset to you is sentiment, you are always clear and stable in mind and spirit.

In terms of health, you are affected by the emotional aspect, maybe emotions generate anxiety and then gradually accumulate into illness. Since it is a mental illness, it is not incurable, long-term treatment will progress.

A tender affection like a fire is always smoldering, it is the love you have for your spouse. In terms of family life and romantic relationships, you are delicate and quickly able to guess what your partner wants, so you are agile in handling situations and dealing with others.

If the candle has to go out, you will know when you have to go beforehand. It is natural, slowly and acceptably, as the Death Deviant Moon Tarot card represents.

In terms of travel, you have many opportunities to go on a continuous trip – one of the most exciting things in your life. The journeys benefit you mentally.

Your friendships are over-emotional but also that is why you are easy to take advantage of. You excessively trust people and open in the way of communicating with friends, so you are often at a disadvantage. However, this is something other people easily recognize, not yourself.

Because you rely too much on the social relationships that you tie yourself up from which the legal issues come along. It takes a long time to deal with them and you often rely on the acquaintances around you to help in the end.

The Death Shadowscapes Tarot mentions closing the door of the past and opening a new door, transcending the path of transformation, changing the state, removing old and redundant things, bowing to the unshakable power and widespread changes.

The Death Linestrider refers to a period of transformation and transmission. This card urges you to throw away the “dead burden”, clear up the things that are hindering your growth, and welcome a new spring.