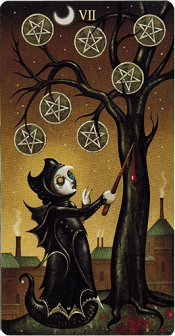 I. The Description of Seven of Pentacles Deviant Moon Tarot

A young witch practicing her spells in the factory garden. She makes a cut on the tree to assess her growth. Seven coins lavishly burst from the dead branches. It seems her efforts have paid off. She stares at the pennies hanging from the trees as if measuring specific data for her endeavors. Finally, she is able to rest and admire her work and the fruits of her labor.

Seven of Pentacles Deviant Moon Tarot shows that you have a strong desire to invest in what will provide long-term benefits. You understand the value of investing in time and energy in the long run, not necessarily overnight. You also want to make sure you focus on the areas of your best interest, instead of wasting time on the things that are not. You have a very long vision and are directing on the sustainability of the results.

It implies that if you have worked hard and put in your best attempts, you will be rewarded with successes and rewards. The work you have been striving for the past few months is likely to come to a peak.

This card usually implies profits from investments which can literally mean registering a bank account for profit or investing your time, effort, and energy into a relationship. You will be reaping what you have strived to sow. This is generally a positive card.

Likewise, if you are planning for the future, Seven of Pentacles Deviant Moon Tarot shows you are adopting a long-term vision so that you can best invest your time and energy in order to achieve maximum output. You don’t want to waste your money on things that don’t work, and start to realize some areas of your life that seem fruitless.

At times, Seven of Pentacles Deviant Moon Tarot can indicate disappointment. You put all your spirit into something really important and start to worry that you won’t succeed. Be patient and appreciate what you have done so far. However, you should also consider whether the set goals are really reasonable or not so that they can be adjusted in time.

Seven of Pentacles Deviant Moon Tarot says that you are enjoying the fruits of your hard work and effort. However, the question here is whether the achievement was worth what you came out with. When you have the greatest progress, you may find that what you want is not really compensated.

It can therefore represent the fear of failure, delay, and frustration. However, the positive side is that you can learn from your failures and prepare for your next investments. To avoid feelings of dissatisfaction, rate your progress regularly, especially when engaging in long-term projects. Make sure you are on the right track to achieve your goal.

The reversed Seven of Pentacles Deviant Moon Tarot shows that your efforts can be scattered at this point and you are starting to wonder if you are making the proper investment. You have lost some money on things that will not really yield results. So check out your current investments and your plans (both financial and timing). Make a to-do list so you don’t waste time and money on meaningless things.

You will be directed to the fact that life is a full circle and what we do today will certainly bring about future outcomes. When you are living generously in terms of time, energy, or money at the moment; It is an expenditure in your expectation. You should know how to give away what you have and be grateful for what you are given.

Likewise, the reversed Seven of Pentacles Deviant Moon Tarot points out that even if you continue to invest a lot, you may not be able to reap what you are looking for. As such, this card urges you to observe the operations carefully. Analyze your costs and benefits carefully to make sure you are on the right track.

Seven of Pentacles Deviant Moon Tarot in reverse says that you know when to stop investing in something when you feel the returns are too little. Some people stick to something, even if it doesn’t really work, just because they have invested a lot of time, effort, and money into it. However, you are adept at identifying a situation that no longer provides you with the necessary benefits and knowing when to give up and tackle something else.

In a relationship Tarot spread, the reversed Seven of Pentacles Deviant Moon Tarot shows that you have worked so hard on building the foundation for your relationship, but now, you are concerned that you will lose everything. You may also feel frustrated that your relationship is not progressing or developing as quickly as you hoped, especially if you have spent a lot of credit and energy. Sometimes you put your heart and soul into something, but that doesn’t mean there will be success. The best way is to stop and start to appreciate the idyllic precious things and people around you, you will feel worthy.

The reversed Seven of Pentacles Deviant Moon Tarot also suggests that you may need a warning about doing something hastily or taking a gamble. This card has traditionally been associated with the idea of ​​a person being a gambler. This is often a person who fails to keep track of the rewards of productivity and self-discipline. Such a person may be willing to risk the farm on rolling dice, betting not only their happiness but also that of loved ones or others. It is a warning against doing something thoughtlessly. It is not too late to reconsider your options.

IV. The guideline of Seven of Pentacles Deviant Moon Tarot

The Seven of Pentacles is usually a symbol for humble workers who are willing to show up every day and sweat in the sun to earn bonuses for the coming season. The traditional concept is to cultivate, with an attitude that slow and steady wins the race, with faith in nature’s support. The figure of this card is not defenseless, changeable, or irritable, but who is conscientious and attentive at work. Of course, it is not good to count your chickens before they hatch, but there is no doubt that the cautious person on a project is more likely to achieve the desired result.

Someone who works with nature, cooperating with her way, will waste less energy and time than someone who works against her. As a side meaning, we sometimes see this humble ordinary person in a frantic moment, betting his/her crop on a roll of dice. This represents a moment of memory loss, addiction, or despair that will hopefully not be long enough for the farmer to lose it all.

Seven of Pentacles Deviant Moon Tarot recommends a long-term focus. Look further this week or this month. This card shows the magic of compound interest. You will get much better results with a slow and steady investment of time, energy, and labor compared to what you will create by trying to win the lottery. The path to success is opened by persistence. Flashy or glamorous steps are no substitute for walking in the right direction. If you don’t understand this, you are probably on the wrong track or not motivated enough.