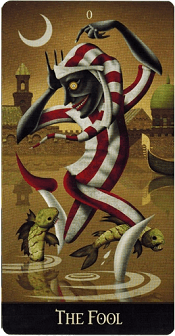 I. The Description of The Fool Deviant Moon Tarot

Not paying much attention to his surroundings, The Fool began his journey by walking into the canal. He has not had any life experience yet so he does not feel any fear at all.

The starting lesson, also the first card in a series of 22 Major Arcana cards, is The Fool. The strange thing is that this card is the first but possesses number 0. In mathematic, number 0 is perfectly balanced, it is neither negative nor positive. Number 0 can also be understood or perceived as a circle – a return or simply not finding the starting point, every point on the circle is the same. Unlike other Tarot decks, The Fool Deviant Moon holds nothing in hand – is it purposeful or reckless? It is clear that during his journey, he will be much lighter physically than mentally.

If this guy is lucky, then he probably won’t need anything and will survive anyway. Otherwise, he will have a hard time withstanding. His face is painted and his lips matched well with the outfit, but the arms and face are a contrasting color. If you pay attention, you will see The Fool Deviant Moon Tarot is wearing a sleeveless jumpsuit, and the pant leg sections are covering his legs. Even the shoes he wears are tone-on-tone with the outfit.

Like a child leaving the house for the first time, the outfit is beautiful, vibrant, and colorful. Red represents luck and joy while white represents purity and innocence. But is this encapsulation too discreet and careful to make the reader feel a sense of stuffy? When this outfit is combined with the hat, there is something overly exaggerated giving a resemblance to a clown. He paints for himself, but he has not chosen a certain standard, can not be blamed because it is The Fool.

He was so excited about his journey that he dressed like that but wades into the water. Either because he is fascinated with the beautiful surroundings, he becomes careless or because of his carelessness, he becomes bogged down. It was not as peaceful as he thought it would be. There are fishes there but they are poisonous. Even though his leg is bleeding from the bite, The Fool Deviant Moon still smiles. His finger points to the fish that bit him, so he knows but is indifferent and ignores. That bite cannot stop him from having fun with this life.

II. The general meaning of The Fool Deviant Moon Tarot

The artistic representation of Pamela Coleman-Smith of The Fool in the Rider-Waite Tarot deck is often used to represent the Tarot in general. However, the early classic versions of The Fool depict a completely different character – someone motivated by basic need and impulse, who has fallen into poverty and lack.

In previous cases, The Fool was considered a festival entertainer or a prostitute. In the other decks, he is portrayed as insecure and vulnerable – the accumulated result of his illusions and failures. It was not until the 20th century that we saw the image of The Fool of the famous Rider-Waite deck appear – it was an innocent soul before falling into the matter, not corrupted when exposed to society and all its evils.

Modern Tarot decks often borrow from the Rider-Waite image, Deviant Moon Tarot is no exception. Most of the Fool cards imitate the majestic mountainside, the butterfly, and the misplaced walk that would have caused The Fool to tumble into the unknown. Still, it is a fact that previous versions of this card represented fallen humanity, over-identified with the material level of existence, and set out on the journey towards self-awareness and, ultimately, wisdom.

The Fool Deviant Moon Tarot reminds us to recognize the path of personal growth within ourselves – and the stage on the path we find ourselves – to energize our progress towards deeper self-awareness.

III. The reversed meaning of The Fool Deviant Moon Tarot

When you withdraw The Fool Deviant Moon Tarot in a reversed position, you are encountering an incomplete side of yourself that being caught in the shadow of ignorance or immaturity. An emotional reflex or psychological attitude can prevent you from reacting honestly and naturally. Let’s free yourself from any dogma or limitation so that your natural honesty and instinct to behave in the right way can be regenerated.

IV. The guideline of The Fool Deviant Moon Tarot

The Fool Deviant Moon Tarot recommends making the most of your full potential to shine. Let yourself be spontaneous enough to move beyond the realm of logic. No advantage is achieved by thinking that you possess the knowledge, power, or control to direct reality. Be open and receive without wondering, instead of trying to manage what is going on right now.

The Fool has no ambitions to manipulate a particular outcome. Just be content to be part of the whole. Release any demand or expectation. Pay full attention to events as they are occurring in the present moment.

You are susceptible to being emotionally dominated, indecisive, and sometimes feeble-minded. Even though opportunities come slowly and clearly, you have difficulty making decisions for your own life because of mental control.

In love, you do not have a specific role model. Sometimes, you feel vague about how you feel about your partner. You will settle in at the beginning of your relationship. However, there are times when you often compare, calculate in relationships, and become the latecomer.

It is only because of your stubbornness and passivity that you often encounter barriers, but your open-minded personality and ability to adapt yourself to the circumstance in time will help you turn the table.

The Fool Deviant Moon Tarot implies that you are prone to changing jobs or that your job requires moving rather than settling in one place. Your confident and agile nature serves the job pretty much. Your only shortcomings are being conservative and inactive.

You seldom have to get involved in a legal issue, if so, the problem is also not so significant. You are also quite sharp, so you can aware of troubles early and improvise immediately.

The Fool Shadowscapes Tarot predicts challenges that appear right in the opportunity that life brings. This card does not make sure that what you get will lead to success or failure, it is merely a premonition at that time you have to take major steps in your life.

The Fool is always the one who points out new things, just like the purity and openness of a child. This card is generally considered a positive card, with the prediction that taking the time to make sure you are “looking where you are going” is very important.

The Fool Linestrider shows all the adventures and new opportunities that await. The Fool is very carefree, carrying no burden of fear or anxiety even when he is taking a foolish step with one foot resting on the ledge of the cliff. He does not look quite concerned that he himself does not really know what is ahead.