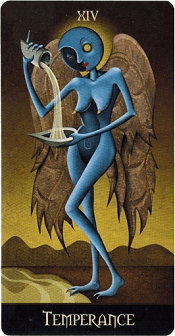 I. The Description of Temperance Deviant Moon Tarot

On the Temperance Deviant Moon Tarot card, there is an angel standing by the gentle stream, patiently pouring water from the vase. Although the ships are of different shapes, the blend that the angel is making represents harmony.

Temperance stands between Death and The Devil, an aberration but strangely unique. Between the mysterious and deadly black and the demon’s magical red is Temperance’s tender blue. Like the roadmap of pain, that is the danger of man. When one aches to the very end of the pain, he reaches the realm of silence and calm, followed by a deliberate plot for revenge, like the face of a demon.

Leaving aside a perspective colored too dark, let’s shift the direction with a more visual perspective for this Deviant Moon Tarot card bearing number 14. The name Temperance means moderation. It sounded like an invisible border was put in place to control everything. Live in moderation, play in moderation, and act in moderation. So in the end, what is moderation? Each person has a certain point of view.

For many individuals that are difficult to control, they get to the Devil card quickly, and being in moderation is probably a challenge for them. And so Temperance was born as a reminder. For those who are confused about how they should continue to work or go on, Temperance encourages and reminds them – control everything with the initiative and regulation from themselves.

Temperance is associated with the woman. That lady with a rather slender body and hands are pouring back and forth holy water. Science has proven that women are more stamina and patient than men who are known as the lead.

The image used on the Temperance Deviant Moon Tarot card is not a middle-aged woman but a very young girl. Refilling a glass of water is a really boring and easy-to-give-up task. This shows how patient and calm she is. Youthful face with 2 halves, bright red lips, and wings, she has a similar appearance to the Priestess but with some changes. Compared to a Priestess with the sharpness of time, knowledge, and understanding, this girl has a round, soft face, wide-eyed look that tries to focus on her work without doing anything wrong. The other half of her face, instead of the calm and cold appearance of The High Priestess, is a somewhat sleepy expression. Each person trying to do something repetitive usually shows fatigue and boredom on their face, but they still have to remind themselves and try to smile and show their cheerful expressions to outsiders.

One side of her feet is on the water stream, the other side is on the ground, like placing herself between reality (the ground) and subconscious (water) deep within her. Normally, each of us often has to fall into a certain situation, balanced times are also times when we calm down and reflect on ourselves, invisibly, we understand more about ourselves and discover more possibilities. In the distance is the image of mountains, difficulties are still there, life requires the processor to really calm down, balance his mental state to handle. Her upper arm is like a man while her lower arm is like a woman, the flow is emotional harmony.

The astrological correspondence of Temperance Deviant Moon Tarot is the Sun in Sagittarius. The Sagittarius Zodiac is an image of a half-human and half-animal figure. The half-animal represents physics, the goat is the essence of each human being. The other half is the reason, control, and balance. Two things that exist and reconcile each other is the way the card wants to show.

The Temperance Deviant Moon Tarot is a reference to the soul. Following the classic female prototype, the woman or the angel on the card is a blend of subtle energies for the development of personality. A key to explaining this card can be found in its title – a play about the metal smelting process in a forge.

The metals go through extreme temperatures, folds, and smashes, but in the end, the product outperforms the impure ores mined from the earth. In this image, the soul voluntarily accepts the ego for a cleansing and healing experience, which can transform the personality from the inside out, but bring about the gold hidden in the heart.

The reversed Temperance Deviant Moon Tarot card shows that you run the risk of giving up on yourself. Something is making you feel apathetic and ignore what you want and need. You may be focusing too much on the chaos and disruption that comes with change and growth rather than regeneration and liberation that could be yours. Try to create a day where you only do the activities that make you happy. Eat well and get a little rest, then reflect on your life. If you don’t get a better perspective, get help.

The Temperance Deviant Moon Tarot card advises you to identify and look for the missing ingredients in your life. Direct your known skills and abilities and do what you need to do to complete your tasks. Prepare to use spiritual practices, research, or lifestyle changes that can assist you in your quest. There will be many benefits if you can organize yourself and be disciplined at this point.

In life, you often have difficulty balancing mentally and physically. You are always torn between self-interest and ego so that you make no progress.

Possessing assets and material emotionally, with a generous and carefree personality in relationships, you are easy to sympathize with and also easily be taken advantage of by others.

In terms of health, you are affected by emotions, illnesses change in a sudden and rapid direction, but thanks to the surrounding relationships, you can solve it promptly.

Regarding a romantic relationship, you should avoid expressing your feelings too enthusiastically or overly giving in, which can cause an imbalance in the relationship and lead to a breakdown.

In terms of trips, you have quite a few opportunities and are able to make them a reality because money is not a matter for you. However, not all trips are complete with joy as they tend to be interrupted by yourself or by outside actors.

Once you reach the peak of your career, you tend to stay stationary. Even though your income is stable, you don’t save much due to overspending on social meetings.

Your friendship is really entertaining, but you need to consider your complaisant personality. Sometimes, placing trust in relationships arbitrarily will cause you to sacrifice your own benefits and be undervalued by others.

Temperance Deviant Moon Tarot card also indicates that you need to be careful not to get involved with the illegal issue. Your over-confident nature in relationships and your own understanding often puts you at a disadvantage and turns things in a negative direction.

The Temperance Shadowscapes Tarot refers to harmony and balance, the balance between oppositions, healing, the reconciliation between opposing divisions, self-restraint, exploiting the principle of absolute balance.

The Temperance Linestrider Tarot is often depicted with an angel with closed eyes, wings behind the back, and two cups in hands. The wings represent knowledge, the two cups represent unconsciousness and consciousness.