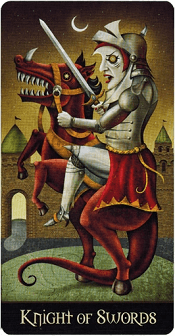 I. The Description of Knight of Swords Deviant Moon Tarot

An open gate awaits the brave knight ready to plunge into an adventurous quest. Although she is known as the protector of the city, she sometimes leaves that position in pursuit of impulsive actions.

The Knight of Swords Deviant Moon Tarot is acknowledged to be one of the distinct cards from the other cards of the Swords suit because the card carries a fairytale hidden in the images. The use of gender in each card has Patrick’s implication, which may not be obvious in the Major Arcana cards, but in the Minor Arcana, this is completely portrayed in a naked and understandable way. First, the application of the female knight image instead of a strong male warrior is due to the connection between the female knight and the horse she is riding. If you pay a little attention, you will clearly see the image of a single-horned horse – Unicorn in Western culture.

Quite a lot of people know about the image as well as the legend of the unicorn. In European culture, it is a mythical animal. The unicorn itself is white, has a horn or wings. Traditional unicorns also have a goatee, lion’s tail, and split hooves. During the Middle Ages and the Renaissance, the unicorn was mentioned as an extremely wild creature, a symbol of purity and grace that could only be captured by a virgin. To get back to the point, it may completely explain why the Knight of Swords Deviant Moon Tarot is female.

In fact, the unicorn is not found in Greek mythology, but instead, in the books of the Indians. Medieval knowledge about this creature has its roots in the Bible. Fables of animals in the Middle Ages disseminate a delicate image, among them, the Unicorn, in the custody of the Virgin Mary. As soon as the unicorn saw her, he rested his head on her lap and fell asleep. This became the basic symbol that underpinned the unicorn concept, proving its presence in all forms of religious art. Along with the rise of humanism, the unicorn also carries the symbol of pure love and faithful marriage. The unicorn is also found in ancient seal designs, a sign of high social status. The horn of the unicorn can dissolve poisons and heal disease. The unicorn is best known among the royal badges of Scotland and the United Kingdom, symbolizing pride, dignity, and rather death than being conquered.

Returning to the Knight of Swords Deviant Moon Tarot, the unicorn in this card is crossbred with a dragon. In the old original is the image of a Knight fighting a dragon, either killing it or himself being killed, in this version, it is about taming and breeding. Of course, to do that, Knight is required experience, accuracy, and strength both physically and mentally. We clearly see the aggression and ferocity of both human and animal figures.

In her hand is a long thin sword, everything becomes flexible, the moon is at its lowest stage, it is time to give way to thinking, using the mind, concentrating without fear. The color used is mainly brown of the earth – the color of trust, stability, support, and serious performance. The silver color on Knight’s body represents wealth, grace, elegance, and sophistication. However, Kight’s impatience and youthfulness are described through her own color and sitting position. If not careful, she would easily fall off her unicorn at any time. That is to say, assertiveness, sometimes accompanied by impatience and haste, is negligence and exhaustion of energy that does not produce effective work.

Usually, when the Knight of Swords Deviant Moon Tarot appears, the meaning is quite optimistic and cheerful, such as the person, situation, or thing that you would like to find out soon. It also refers to your energy, emotional, and physical resources at the peak. If you are waiting for someone or an event, you will be interested in what you are about to hear. Besides is the evocation of the journey, the urge you are, which means you cannot wait any more seconds, sometimes, accepting the call of your heart is a must.

When we are obsessed with an idea and want to express it, we often fail to notice the difficulties or consequences of our actions. Knight of Swords Deviant Moon Tarot is a powerful character who is full of vitality and energy and must be balanced by responsibility and compassion. Once set out, nothing can stop her!

She does not perceive nor cares for any challenge, risk or danger, and rushes forward with her strong intentions and determination to win and conquer. On the positive side, this card shows great ambition, determination, and the power to succeed without obstacles. On the negative side, she can turn a blind eye to potential challenges and consequences and plunge straight into dangerous lands without foresight or preparation. She can also ignore the needs of others as she is determined to pursue her goal.

Knight of Swords Deviant Moon Tarot often reflects a time when you embark on a new project or idea and do not want to stop. Your energy explodes, motivating you to move forward and inspiring quick actions to accomplish your goal. You are ready to overcome any problem, challenge, or obstacle. However, you hustle or take shortcuts to get things done. Sometimes this works, sometimes it doesn’t. For example, using a low-cost factory will help you get the job done quickly and cheaply but quality can suffer in the long run and you can spend more time correcting errors. Also, make sure you meet the needs of others, especially if they are a part of long-term success.

Knight of Swords Deviant Moon Tarot also represents your need to learn the world from your intellectual point of view. You have good communication skills and can easily make strong arguments and opinions on current and important issues. You enjoy engaging with people with similar skills so that you can share your ideas and develop new prospects. You may be best suited for discussion groups with individuals who are likely to argue with you.

The reversed Knight of Swords Deviant Moon Tarot is extremely impatient, impulsive, and aggressive with her energy. This person has a lot of energy but does not know how to control them. Her thoughts are scattered. She can be disorganized, less serious, and unpredictable. If you encounter this type of person, be extremely cautious, and make sure you don’t get caught up in their energy.

The reversed Knight of Swords Deviant Moon Tarot points out that you need to go alone in order to build life experiences worth maturity. When you seek freedom and independence, you will most likely go wrong on your way due to your recklessness and impatience but this is part of the journey. This card often reflects a rebellious teenager struggling for his/her own independence, and the parents need to allow their children to do what they want and teach them to take responsibility for their own actions.

It may also suggest you should slow down or else get your energy drained and exhausted. You want to be involved in everything, but you cannot be successful at all because your thoughts and energy are always distracted. Take a moment to think about and focus on your top priorities.

IV. The guideline of Knight of Swords Deviant Moon Tarot

This card has traditionally been named The Knight, but in some modern decks, it appears as The Prince. It depicts a restless mind, aroused by thoughts of offensive and defensive behavior, rushing to find a target to attack. This Knight often feels despised, wears a chip on his shoulder, and snaps with hostility. His usual method is to find someone to blame for his annoyance.

Furthermore, with a righteous attitude, he can assign himself the work of correcting offenders. Easy to come to conclusions, he shoots first, asks questions later, and is therefore often committing an excessive crime. This doesn’t mean he doesn’t have his hero side; A single combination can be worth it. However, even if he is doing the right thing, he can do it for the wrong reasons. The right piece of advice for this card is to question deeply your motives for what you are thinking about working. Self-considering will help you discern righteous and unrighteous causes. Control any trace of impulsive judgment!

Sometimes you will notice details on the Knight of Swords Deviant Moon Tarot card, that this person may be more of a woman than an expected man. There is some evidence that the tradition of the knighthood includes a number of “anonymous knights” who took their mythical names and concealed their true identities. Living on the road with little or no servants, they serve as defenders of freedom to tourists, defenders of little ones against the exploitation of both highway robbers and the noble class. Strangely, some of these knights were women in disguise, and that idea is preserved with the traditional image of the Knight of Swords.

Knight of Swords Deviant Moon Tarot recommends that you be open to conflicting opinions rather than just revolving around yourself with people who agree with you. This Knight is most effective at testing her idea in a debate. Simulate her ability to communicate successfully by keeping your conversations carefree and humorous so that no hurt feelings are provoked. Practice your negotiation skills so you can prepare for impending diplomatic challenges as they arise. One partner can help you learn to control impulsive comments and suppress your desires to be right at the cost of others being wrong.