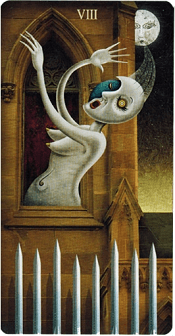 I. The Description of Eight of Swords Deviant Moon Tarot

In Eight of Swords Deviant Moon Tarot, the young woman is caught in the lethargic feeling of bound sleep and is attracted to the evil moonlight. The eight swords from below are a threat to her as she reaches out the window. The impact of the moon on her dreams will soon end as dawn is rising.

It is not too hard to see our young lady just plunging herself off the balcony. Her heart now only does its job of beating, and her mind and everything is now governed by emotions. Women always lose themselves more in love or problems related to romance. Don’t let your own feelings be tied down by a man’s dreams. Do not bind the other person in the name of love, we come together as two independent individuals and for the better, otherwise, we should let each other go.

The moon shines its aloof and white light on eight swords. The citadel that cannot hold her and the scaffolding built by eight swords is only temporary. Don’t make a decision quickly, because settling and not making a choice is also a decision. Everything will be alright. The full moon will transform into the crescent. Dreamers will wake up. Just hope those conscious people will know the way, as “when faced with a challenge, look for a way, not a way out” – David Weatherford. Having true love will give you confidence and keep you secure.

Eight of Swords Deviant Moon Tarot reflects that you feel trapped by your own thoughts and opinions. The woman in this card is rushed out of the tower and is surrounded by eight swords. She thinks she has no way out. However, if she changes her mind and looks for another direction, she will find that she has many options. So Eight of Swords shows that you need to look at a problematic situation from a new perspective. Use your mind and your emotions to determine the best path forward.

Eight of Swords Deviant Moon Tarot is often a sign that it is best not to make any important decisions at this point as your thinking has been limited by the boundaries set by yourself. You are having difficulty assessing situations and blindly believing your statements. Although options are available at first, you must first navigate properly to find the best option. Therefore, see things from different angles. There are so many ideas forming in your mind. It is best to wait until you feel stable and sure of the situation before making any major judgments or actions.

The woman in Eight of Swords Deviant Moon Tarot is often said to be powerless. She had hastily surrendered to an unknown situation, though her strength was still present. She fell victim and waited for rescue. If you see a part of this woman in yourself, regain your strength, and open your eyes to see the choices ahead. The reality is that you don’t have a lot of options, even if you don’t like having to.

Eight of Swords Deviant Moon Tarot describes a dilemma and you are faced with the challenge of a painful decision, leaving you at a standstill, uncertain of the path ahead. However, you may not realize that the decision in card Eight is the result of your past actions. Despite the fact that you lock yourself in the box, there is always a way out. The simple solution is to deal with the situation as directly and gently as possible and to face your choices with inner strength. This is the time to be honest with yourself and others so that you can get rid of the burden of fear or guilt hidden deep in this card.

Eight of Swords Deviant Moon Tarot may indicate that your rights will be countered by someone else, and this limits what you want to achieve. Regain your strength and realize that every decision is in your hands no matter what objections others may have. You don’t have to limit yourself by their thoughts or rules.

Keywords and extensions: Freedom, The ability to think for yourself, Independence, Open new perspectives, Liberate, Eliminate obstacles, Release something, A new beginning, The secret is revealed, Overcome fears, Get rid of restrictions, Get out of the cage, Rescue, Stop interfering, Empowerment, Regain confidence in yourself, The recovery of productivity, Self-affirmation, Freedom, Able to see the way out from the current situation.

When the Eight of Swords Deviant Moon Tarot is in reverse, there is a tendency to rationalize, justify, and blame others. Make sure you don’t do it. Evaluate yourself by the standards your competitors follow, before you fall into your own trap. Focus on your inner dialogues and conversations with others on what you can do to make a difference. Inspire others to see the highlands and join you there. You cannot complain about your opponent’s bad attitude if you have one too.

The reversed Eight of Swords Deviant Moon Tarot indicates that you have been through a difficult time and are becoming more open to diversity and self-acceptance. You can think about what you did or did not do in the past, and alter your opinion and approach. You admit that there are actually many options, and you refuse to play the role of “victim”.

The reversed Eight of Swords Deviant Moon Tarot suggests that you need to let go of some of the past restraining factors. Allow yourself to let go of habits, behaviors, and beliefs you might have in the past that no longer works for you.

IV. The guideline of Eight of Swords Deviant Moon Tarot

Often referred to as “The Test”, Eight of Swords Deviant Moon Tarot depicts a warrior running the gauntlets, undergoing rigorous testing, who finds out how tough he or she is in this progress. Life offers us a lot of experience that puts us in situations that must be thoroughly tested – whether it is an entrance exam, a decisive job interview, or even tough conversations after a breach of trust in a close relationship.

Sometimes challenging or overcoming has nothing to do with another person, like when an inventor is faced with the question “Does it really work?” or when the aspiring person has to decide how badly he wants to go through the start. This card shows what happens to that great idea in real-time, where the rubber meets the road. The test represents your opportunity to demonstrate the time and energy spent getting ready for a critical moment. In most cases, you will either pass or fail, with little in the way of available middle ground.

With the Eight of Swords Deviant Moon Tarot, you are being reminded that every failure you experience is a teacher that awakens you to your innovation efforts. This is a learning-by-work situation; There is no formula to guarantee results. However, you can be sure that an open and optimistic attitude will help you better in the face of surprising developments.

Get ready to take the rigorous effort that is being called upon until now. Done conscientiously, with good faith and hope. This way, you will avoid arguments and criticism, overcoming negative forces, and defeating demons of doubt and rebellion. Get excited about your challenges; Be confident that you have what it takes to improve your situation. If you practice your internal preparation, the external circumstances will open up for you.