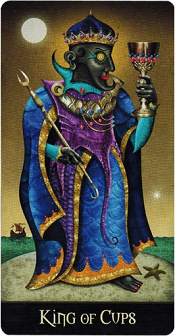 I. The Description of King of Cups Deviant Moon Tarot

The King of Cups Deviant Moon Tarot who is clear-sighted and able, standing proudly on a sand dune. His seaside kingdom prospered due to his wise leadership and creativity. A commercial ship sails on the horizon while a spiritual star illuminates the ground below.

His expression is calm, with a golden cup in one hand and a golden staff in the other, he wears a splendid necklace with a fish-skin pattern. Fish is a symbol of spirit, creativity and shows the balance of unconsciousness and consciousness. In the back to his right is a sailboat gliding across the sea. These images are a sign that the unconscious was over, and of course, King knows about this, but it is still under his control and cannot overwhelm a second.

The King of Cups Deviant Moon Tarot does not suppress his emotions and unconscious impulses but learns to accept and deal with them in a mature and balanced manner. Like the other Court cards in the Cups, he represents emotion, creativity, and unconsciousness. But the difference is that he displays more restraint in his emotional state. He is a master of private emotions and can control his sentiments. However, this does not mean that this person is holding back his feelings and emotions. In contrast, the King of Cups represents a balance between emotion and intelligence. This card often shows a strong bond in a relationship based on patience and understanding.

King of Cups Deviant Moon Tarot shows that you feel your emotions are in balance and in control. You have a very deep understanding of your emotions and feelings and can connect with them when needed. When you try to do well in your role in a play called life, your emotions and feelings become more mature each day and help you to be strong through all difficulties. Also, this is a great gift from God because you can use your dignity and composure to share and help those in need.

If you are facing challenges, the King of Cups Deviant Moon Tarot is a sign that you need to create emotional balance. This King represents compassion, one of the most powerful and beautiful qualities of spirit. Ask yourself, “How can I develop a stronger sense of the unconscious without being overwhelmed by its power? How can I develop a strong sense of compassion without falling into the trap of affection? “

King of Cups Deviant Moon Tarot encourages you to be considerate when working as well as consulting and talking to others. You need to find out why the emotions arise so strongly and how to cope wisely in the situation. It is important not to hold back your sentiments, but to explore them with an open and generous heart.

Sometimes, the King can represent an older man in your life. This card depicts a businessman, a legal profession, or someone who is patient, thoughtful, and willing to take responsibility for his actions. Although he is a patriarch, he is quite sensitive, generous, always soft-spoken, and cherishes others. During a crisis, he can listen to people’s opinions and respond calmly. What he uses is his ingenious diplomatic ability to persuade others, not force to suppress them to obey his demand!

Likewise, the King of Cups Deviant Moon Tarot gives you a wonderful dose of love, sympathy, and gentle manners. He is powerful in the business world and values the truth. If you are having a hard time, he will definitely be the man you need. He is capable of diplomacy and his political activities are very ingenious. His talent lies in being able to balance the needs of many people and help them work together harmoniously and effectively. He knows how to show his care and sophistication to guide others towards a common goal. He understands what people think and want, and always tries to fulfill their emotional needs.

If you are having trouble, the King of Cups Deviant Moon Tarot shows you need to maintain emotional integrity when dealing with negative energies from others. On the emotional and sentimental aspect, you need to perceive your limits, know what you can or cannot do. The King of Cups is the first King to control his emotions. He makes intelligent decisions based on his emotions and does not allow circumstances or sudden ideas to affect his beliefs and morals.

The reversed King of Cups Deviant Moon Tarot is a bitter man holding a grudge, giving up on his natural tendency to forgive and bless. This inversion creates an emotional void around him and makes him lose his peace. His extraordinary power of empathy and compassion has disappeared in order to rekindle the past and feel grieved for himself. Let’s dispel disturbances, embrace the wound, forget, and forgive. Let the sunshine of peace and kindness return to the big picture.

The reversed King of Cups Deviant Moon Tarot shows an extraordinary ability to control and manipulate emotions. This is a gruff, sullen, sulky person who easily shuns others, especially when things go wrong. When he hates someone, he is able to punish them by manipulating their emotions. He emotionally intimidates and overpowers someone to do his thing and push forward with his plans. He makes you feel distrustful of yourself and thinks that all mistakes are caused by you, not related to him. This leads to your emotional instability. If this makes you think of someone you have met in the past, then you must get rid of that person’s influences.

The reversed King of Cups Deviant Moon Tarot can also represent an adult who is filled with affection and at the same time, let emotions begin to take control of his or her life. King in reverse can depend too much on other people and keep his image in their eyes. He may fall into delusions or plunge into addiction, alcoholism to deal with emotional pain. This may indicate that you are stuck in a relationship with someone and their dependency and affections. You are deceiving yourself or being deceived by others, and the most important thing in this situation is to objectively acknowledge what others are doing and how they are treating you.

In the relationship spread, the reversed King of Cups Deviant Moon Tarot shows you are quite confused about your connection and your sentiments are out of balance. You are not sure what your true feelings are, and they change every day so you get completely disoriented. Be extra careful with your words and gestures so that your partner doesn’t think you are a person who blows hot and cold. Conclusively, you need to take control and take responsibility for your emotions. Right now, you let them take control of you and reverse all your usual views. You want to take responsibility for your life but then let it go and leave fate to guide you. It is best to take a break and meditate until you understand your feelings and can handle them.

IV. The guideline of King of Cups Deviant Moon Tarot

The King does not need to speak to convey strength, passion, and commitment. Sometimes, he wears the robe like a priest. Powerful and intuitive, he is a force to be reckoned with. King of Cups Deviant Moon Tarot recommends that you check your conscience closely and put your personal mission in line with what is best for everyone. Then, you can enter your community or situation with the highest level of integrity and intelligence.

As this calms the environment, others will be inspired to uplift their own motives and intentions to be right for you. You will provide a critical type of leadership that uses strong reassurance to help everyone work together. The most convincing thing about you is your example of generous behavior – far more powerful than preaching alone.