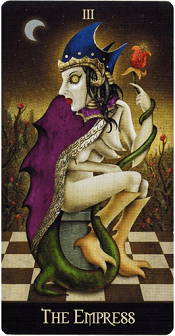 I. The Description of The Empress Deviant Moon Tarot

The Empress reigns in a garden, where a flower blossoms from her own body. As the goddess of femininity, she blends into one with nature. Believe it or not, the Major cards are the milestones in the life of each person or character, the events that will have to appear in your life. The first card, The Fool – who is born, covered in the way of life, he becomes a talented person – The Magician. Then needed a little balance and purity in life – The Empress has arrived. But to start his life, he needs an existence, that is Mother. The fourth card The Empress Deviant Moon Tarot is that mother.

The queen has white skin, red lips, and black hair. This woman sits firmly in a certain position, wearing a long robe and a crown, combined with iridescent details that highlight the noble origins, expressing wealth and prosperity. The blue in the crown is the least controversial color, that is, those who have a certain position or use this blue outfit to negotiate and communicate when faced with resistance from subordinates. Certainly, when it comes to purple, many people will immediately think of fidelity and dreams. But the truth is there has always been a history of color evolution.

Purple shades are rare in nature and most of them have been artificially prepared. This is also a historical achievement. The first purple color appeared around 1900 BC and it took 12,000 shells to extract 1.5 grams of pure purple. Because of its rarity, purple was used and dyed clothes only for kings or wealthy characters. Over time, although less expensive, the purple still symbolizes wealth and nobility. The light purple color represents blossoming and delicacy, while the deep purple represents wisdom and depth. Purple is used to balance psychology, help dispel obsessions, anxiety, and fear. Also, it evokes opacity and is the color of magic. The downside of purple is decadence and presumptuousness.

Continuing to analyze, we see The Empress Deviant Moon Tarot has many breasts, the source of an abundant vitality. From her body is connected to a branch of roses. This flower curls around her arms. It is said that beautiful roses often have thorns. Her flower has thorns, but only one, which is also subdued under her feet, Is the hidden inside of her a feminine delicacy and she wants to show that sweet beauty to the outside world? The flower from her is also gentle, budding shyly, not blooming. Like a woman who shows off her beauty moderately.

Being gorgeous from the gesture and sitting posture, but she makes people see a little strange from the card. Holding the beautiful flower in her hands but she turns her face away and distracted, The Empress Deviant Moon Tarot is directing her gaze somewhere else.

This woman represents fertility, prosperity, abundance, and vitality. But if you look a little closer, you will see, where she occupies is a secluded place, even though surrounded by lush vegetation. Maybe she was not satisfied with what she had and somewhere inside she still wanted to reach out to nature, to a world where she was not attached to her status. The only thing that is quite vague is her gaze. Maybe she is observing or is gazing somewhere else, or searching for something new than what is in her hands. This woman probably lacks nothing but still shows the woman’s greed and the desire for new things.

II. The general meaning of The Empress Deviant Moon Tarot

The Empress portrays the energy of a great mother. She is nature, all around us but also within us, a constant source of life energy. The Empress is often envisioned as a Pre-Christian Goddess, whom The High Priestess is passing down to Earth for the rest of us.

In medieval Europe, The Empress was drawn to represent any queen currently ruling the land, perhaps to please the Inquisitors. But Renaissance scholars and beyond have no doubt about her true identity – she cannot be fully revealed on the Tarot cards as “the woman clothed with the sun” until after the French Revolution.

The supreme archetype of femininity also symbolizes fertility. It is The Empress who provides us with nourishment and security. She was also sometimes seen as the one who fascinated us with flowers and fruit. A potentially frightening aspect of this archetype manifests whenever mood swings wipe out our plans, as a storm hits us. Whatever happens, The Empress is the source of our embodiment and the natural law. She might even be called “The Great Recycler.”

III. The reversed meaning of The Empress Deviant Moon Tarot

Because The Empress represents nature, when being reversed, she has an immense natural power to correct her inattentive children. Volcanoes, tsunamis, storms, and the like represent violent emotions caused by ignorant or foolish humans.

If you feel like fixing, you may be justified, but set limits on how punitive you allow yourself to be. You do not want to go too far and destroy everything you have enjoyed.

IV. The guideline of The Empress Deviant Moon Tarot

The Empress Deviant Moon Tarot recommends believing in the good meaning that you have expressed so far. Realize your good intentions in carrying out your responsibilities as a compassionate person. You can show the best aspects of your personality.

Let’s demonstrate this through attentive actions, a generous and forgiving attitude, as well as a wise understanding of the needs and difficulties of others. Besides, give a healing effect on your current situation and take full credit for the supportive role you play.

Your life is emotionally affected and dominated. You often overthink, by nature, there is nothing or not to worry about, but you usually are worried and anxious.

The Empress Deviant Moon Tarot tells that you are quite agile, confident, work flexibly, and have the talent to improvise so that your assets, money, and wealth are quite a lot. Be well-off in life and settle in your goals, completed many plans set out, and achieved a lot of success. Regarding your love life, you will have relationships that take time to know each other as classmates or acquaintances for a while before deciding to make the next move.

The trips are your advantage. They are mostly pre-programmed or specific events. Most of the trips are fun and go smoothly without any problems.

The Empress Shadowscapes Tarot refers to creativity, generosity, patience, and love. She is a person who is full of richness, creativity, and experience of natural feeling and generosity. She is Virgin Mary, fertility and nurturing.