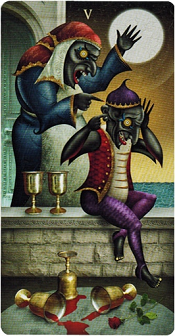 I. The Description of Five of Cups Deviant Moon Tarot

On the Five of Cups Deviant Moon Tarot, we see domestic violence here. But perhaps the victim here is the man before the terrible scolding of his wife. The miserable woman is yelling at her husband for spilling three cups. The liquid in the cups spills slowly onto the ground. There is a rose on the ground as a reminder of the romance that once existed here. The other two cups remain intact, symbolizing the love that still persists despite the distance that has appeared between the man and his wife.

Five of Cups Deviant Moon Tarot is meant for conflict and discord of relationships and marriage. However, the positive signals in this card are still numerous. This is not the end of a romance. Look at the full moon full of reunification, two cups still standing on the edge of the wall, the rose is intact despite being thrown to the ground, and especially the couple’s hand movements. They still have a connection and a certain resemblance.

And instead of a brutal end, the scene resembles a classic quarrel between longtime couples. There is still a lot of sympathy between them. Once you sympathize and understand each other, believe that everything is not the end. For readers who are too familiar with the Rider-Waite Tarot, it will be difficult to interpret in the spread that has the Five of Cups Deviant Moon Tarot because the drawings in these two Tarot decks are almost completely incompatible.

The Five of Cups Deviant Moon Tarot talks about not being fulfilled or not achieving expected results. You are feeling frustrated that a situation did not go as you hoped, and instead of setting up another plan, you immerse yourself in torment and regret what was lost. The liquid pouring from the three cups and the couple quarreling shows that the cause of regret is more on the emotional side than the financial side. You are plunging to the bottom of despair without brakes and becoming increasingly pessimistic about your future.

The Five of Cups Deviant Moon Tarot also suggests that you are the biggest cause of your situation right now. Look at the man in the card, despite an intense quarrel with his wife, he does not protest, explain or face it, but endure and ignore it which increases his wife’s anger. Difficulties and discord have happened anyway, the best thing to do is to settle them and untie every knot. Your indifference is good for nothing but making the problem more and more stagnant and waiting to explode. Besides, it can also refer to your untapped or left-aside potentials. If you keep letting them be raw and untouched gemstones, you are the one to blame.

The Five of Cups Deviant Moon Tarot shows you are having a hard time trying to forget the past and learn from your mistakes. This card is often a reflection of a person who is caught up in the past and unable to move on and has lost new opportunities. Bitter memories in the past keep bothering you, and responsibilities for previous actions continue to weigh on your shoulder. Everything seems to have come to a standstill, but in addition to pointing out the core of the problem, Tarot also helps you find the right path.

Forgiveness and the ability to recover from an emotional loss are essential. If you are feeling frustrated by the other person’s actions, forgive them from the heart to free yourself from disappointment. You also need to reassess your expectations that you have set. Ask yourself whether you expect too much?

Remember, it is very important to be aware of the reasonableness of your expectations; and today’s wisdom is based on past fault. Reflect on what has propelled you to this point and draw valuable lessons from them. Even when things go to a deadlock, you can always find something positive out of your mistakes. You have lost a lot, but there is still a light of hope as you still have two cups left. Don’t pity yourself with the Five of Cups Deviant Moon Tarot, instead, see everything from a brighter perspective.

Keywords and extensions: New relationships, A friend from the past returned, Acceptance, Forgiveness, Hope, Rekindle old love, Good news, Expectations, Opportunities, Make up a relationship, Deal actively with misunderstandings, Overcome the past, Look at things in the positive direction, A painful end, Bereavement, Inevitable loss, End a relationship that you cherish.

The reversed Five of Cups Deviant Moon Tarot is about getting up from regret and accepting the past. Now, you begin to recognize the effects of the past and appreciate lessons learned from your experience. You may even realize the value of painful experiences to a wider range in preparation for them. You are ready to face the other two cups and develop your feelings.

This card is also about opening up your heart and taking risks again. It is of long-lasting regret, bittersweet nostalgia, and memories but it also speaks of hope for the future, awareness of whatever you need to overcome, and seeing a rainbow after the rain! If you have suffered a broken love, the reversed Five of Cups Deviant Moon Tarot means an end to suffering and a start to new love and new relationships, interests, and new emotions; It can also be the flames of passion in current relationships that arise. You are beginning to experience inspiration, creativity, and the feeling of being alive again.

The reversed Five of Cups Deviant Moon Tarot also says what you really want and what will really make you happiest. Those are the luck lurking behind the mishaps. Sometimes, “disappointment” is imperative so that we can see through our delusions and free ourselves in order to find out what truly is of value in life. Once you make this transition, you will be given new opportunities without having to give anything.

Sometimes, the reversed Five of Cups Deviant Moon Tarot shows a sense of being stuck in the past, making you feel overwhelmed, and unable to focus on the positive aspects. In the opposite position, it can also say that feelings of regret are buried deep inside and forever a thorn in the heart, which cannot be erased. The number five is also the number of variations and indicates an emotional instability through which we can induce a change in our approach to life.

IV. The guideline of Five of Cups Deviant Moon Tarot

Five of Cups Deviant Moon Tarot depicts a state of turmoil after an emotional outbreak, such as rage or anger. The consequences range from hangovers and loss of wages to abuse and destruction of relationships. This card is sometimes referred to as Inheritance, hinting at the cross-generational legacy of such tragedies. Much larger-scale models of domestic violence can turn into a war.

Five of Cups Deviant Moon Tarot recommends you should tighten your belt, performing less, and gratitude more for the things you have. If something is really yours, it cannot be lost. When you are experiencing loss, it may be due to inappropriate emotional attachment. If you make promises that you cannot fulfill, you might be setting yourself up for frustration to follow. When we overestimate our abilities, we are forced to deal with our limitations.

Be grateful that when the cups fall, you lose only three out of five. The two are still intact, pristine, and full of divine energy. Don’t cling to the setback but focus on your potential.