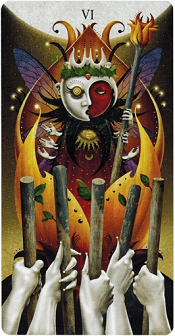 I. The Description of Six of Wands Deviant Moon Tarot

Tonight, the forest celebrates. The big character of the Six of Wands Deviant Moon Tarot card has finally appeared! From the flower bud illuminated by the moonlight appears a proud living being. Five sticks are held up high to celebrate the ongoing event. Hand holding another stick, this figure blesses all existing souls.

The mighty figure of Six of Wands Deviant Moon Tarot wears a magical purple outfit. The purple color is reminiscent of The Empress’s splendid image. The purple color first appeared around 1900 BC and it took 12,000 shells to extract 1.5 grams of pure purple. Because of its rarity, purple was used only and dyed clothes for kings or wealthy figures. Over time, although less expensive, still purple symbolizes wealth and nobility. Light purple color represents blooming while deep purple represents wisdom and depth.

Purple is used to balance psychology, help dispel obsessions, anxiety, and fear. Also, it evokes opacity and is the color of magic. The downside of purple is decadence and presumptuousness. On the costume, there are 2 details that the moon and sun appear at the same time. Contrary to the moon that represents the unconscious, the wild nature, and natural instincts of each person, the sun represents inner light, humanity, and rationality.

The figure’s wings are shaped both like butterfly wings and wings of insects. In the field of scientific research, the origin of the insect’s wings is still a mystery and it could be a new evolutionary discovery. One theory is that insect wings are a new feature in evolution, emerging from random buds of tissue during development. But it has recently been argued that insect wings, formed from existing structures in ancient crustaceans, gradually transform over time into something more useful – into wings that we often see.

The wings, the flower bud on the stick this character holds as well as the flower bud surrounding the character represent a transformation, a rebirth, and a reappearance in a more epic and splendid way than ever. The Six of Wands Deviant Moon Tarot is indeed a brilliant card with astonishing details, giving positive and powerful energy. The cocoon has become a butterfly, the bud has bloomed, everything becomes glowing and radiant, illuminating the forest. All your efforts, labor, and patience have now been paid off.

Six of Wands Deviant Moon Tarot is all about success, victory, and recognition. Not only did your goals succeed, but your efforts have been recognized by the people around you. You may have recently received an award, acclaim in public, or recognition from colleagues for your work. This contributes to increased self-confidence and gives you more strength to keep going.

This card shows that you have exploited your strengths and talents to deliver a successful result with your efforts. You’ve managed to get through the Five of Wands, minimize distractions, and focus on the main quests. You have overcome challenges along the way, and now you are focusing your energies on one goal to pave the way for success. This is your time to shine and take the lead.

Six of Wands Deviant Moon Tarot is a positive encouragement to believe in yourself as well as the achievements you have made so far. Don’t let fear or guilt get in the way of your progress. You should feel proud of what you have gained. Raise your head with spirit and feel proud of the attention of others.

Six of Wands focuses on creating success and building your personal brand and reputation. You want to be victorious at what you do, but at the same time, you also want to make sure that other people know about it and appreciate your abilities. You may need to motivate yourself more often by sharing your stories with others and encouraging them to follow an alike journey. If you haven’t already, you’ll soon have some great stories to share. You may even be interested in applying for a scholarship to aid in branding.

The disadvantages of Six of Wands Deviant Moon Tarot are arrogance and self-esteem. With the victory, you might think that no one can do better which leads to your ego becoming too big. If you go on this attitude, someone may want to take you down and criticize you, bringing potential frustration and discretion later on. If empowering the energy of the Six of Wands, remember how you would feel if someone made you feel inferior or put you down. Tame your ego and make your victory truly sweet.

Keywords and extensions: Procrastination, The result is not worth it, Unable to fit in, Domination, Loss of prestige, Lack of confidence, Loss of reputation, Be defeated, Late success, Failure, Loss, Delay, Win a goal but lose the game, Bureaucratic behaviors, Adultery, Poor communication, Misunderstanding, The disadvantage, Disappointment.

With the reversed Six of Wands Deviant Moon Tarot, you’ll find yourself doubting your abilities. You may feel negative about yourself, as well as assume that you are involved in the people around you. You lack confidence and need the support and recognition of others to give you strength.

Reversed Six of Wands Deviant Moon Tarot contradicts that you have lost your reputation and are not as well-received by the public as expected. You may not get feedback for your efforts, or if so, just negative ones. You have been looking forward to a result, but the truth is just a vain attempt, and you are blamed by everyone. If a particular project is not as successful as expected, it is better to move to a new environment so that personal reputation and branding can be rebuilt, rather than trying to correct your mistakes.

Reversed Six of Wands Deviant Moon Tarot shows that you have tried to achieve too many things at once and cannot do it all as well as this commitment. It might be best to focus on just a few things. This will help you feel inspired and motivated.

Reversed Six of Wands Deviant Moon Tarot may reflect the temporary nature of success. At some point, you’re on top of the world because you’ve achieved great things, but then the expectations get too high, and when you make mistakes, you will be kicked to the ground and receive all reprimands. When you win and feel great, never fall asleep on victory, keep working until everyone recognizes you.

Coupled with the admiration and prerogative of a leadership role, comes the pressure on people’s expectations and a certain lack of privacy. You can’t maintain your good side twenty-four hours a day, so give in to the fact that now you’ll be clearer and more responsible. Adjust your behavior to accommodate this predicament.

IV. The guideline of Six of Wands Deviant Moon Tarot

Six of Wands Deviant Moon Tarot points out respect and acknowledgment towards you for your efforts to solve the problems of your community. The image is usually of a victory parade after the famous leader helped the squad win a key battle.

Of course, it took the whole tribe to win the victory, but it was the courageous spirit and wisdom of the leader under pressure that motivated them to overcome. The team is very pleased that their leader led them to victory. This card represents a time for people to relax and celebrate – if you’re the leader, let them appreciate you. They are seeing their better selves reflected in you – a real victory!

Six of Wands Deviant Moon Tarot recommends acting on your most passionate and burning beliefs, no matter what the social consequences. Continue to clarify and define yourself in the light of the torch you are carrying. This inspires others to form some new ideas of their own.

You can find yourself becoming a leader. Usually, the first person to break out of common sense is the one to identify the new trend. In that situation, fresh voices and perspectives are needed – so take action. People who are willing to change around you will support your leadership.