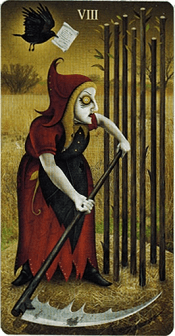 I. The Description of Eight of Wands Deviant Moon Tarot

In the field on the Eight of Wands Deviant Moon Tarot grows seven trees and a farmer prepares to clear them. Another wand acts as a scythe handle, which the farmer uses to readily cut all the trees growing on the field ground with just one slash. Above her is an approaching black crow, carrying important information.

This woman is dressed in red – the color symbolizing intensity and decisiveness and in her hand is the scythe of death, further highlighting the strong action that will about to cut all other seven trees. The image of the crow is also linked to the scythe in the hand of this woman because, in the general perception of some ethnic groups, the crow has a symbolic meaning and is connected with witches. In India, crows are also for the messenger of Death. In some Western epics, crows are also creatures that signal the death of heroes in great battles. They often travel in pairs and often appear before the woman who is the mother or wife of the heroes to deliver bad news.

In a positive sense, the crow is an omen of transformation. In Native American society, crows are a symbol of supernatural powers. They have been entrusted with teaching the ways of life to talented people. Some American Indian tribes consign the crow to protect the divine works of God. Without the constraints of time, a crow can live in the past, present, and future at the same time. With such freedom, one can freely move between worlds of light and darkness. They have the ability to create new worlds, which is what the crow does in the Athapaskan belief system in Alaska, and their talent is needed to lead souls on their final journey in the dark.

The image of the lettering crow in the air and the woman swinging the scythe bring about very quick changes to the whole scene in the Eight of Wands Deviant Moon Tarot, but the frame just stops here. How things happen after that, is up to the readers to decide. Will you hastily cut the seven trees first, or stop to receive important information from the crow?

Eight of Wands Deviant Moon Tarot indicates that the struggle in Seven of Wands is over and you have the freedom and space to move forward with your plans and activities again. It contains extremely great energy and its movements push you forward at speed faster than ever. You will be very busy but this is a very good time to invest your time and enthusiasm for projects.

Eight of Wands Deviant Moon Tarot represents the structure of movement and action. Number 8 talks about structure while Wands is integer energy. Thus, the structure of 8 creates a path for the flow of energy. You are very sure of your goal and all distractions have been removed. You can dedicate yourself to the job with full focus, determination, and will. This allows you to get a lot of things done in less time.

With Eight of Wands Deviant Moon Tarot, you can look forward to quickly completing an ongoing project, but you can also expect to find something new and more interesting, and get very inspired soon. Nothing can stop you right now because you are flourishing with all your energy and ideas, and can’t wait to start something else. To optimize this energy, it’s important to make sure that your operations are focused on larger goals and that you’re investing in the right things at the right time. Also, before you embark on the next work, make sure the previous task is complete.

This is an action card. It encourages you to make quick decisions in order to pursue the best opportunities available right now. Usually, the Eight of Wands Deviant Moon Tarot talks about air travel. It could be a short or long term trip, like a business trip or a holiday.

On the other hand, Eight of Wands also states that the haste and rapid progress of a situation can lead to wrong decisions. It is important to make use of the available energy resources to your best advantage and not to get to work without a clear plan.

The reversed Eight of Wands Deviant Moon Tarot can indicate significant delays, especially for travel or moving quickly with planning. Although there is a lot of energy and enthusiasm to push things forward, you are facing many hurdles in your plan. This makes you extremely frustrating and impatient day by day. Keep on looking for other ways to overcome obstacles and work on your plan.

In addition, the reversed Eight of Wands Deviant Moon Tarot shows you are preparing an idea or plan but take it slow and consider the next steps before proceeding. You can make mistakes by rushing. Similarly, this card can be a sign that you should postpone your activities for a short period of time until the situation becomes more stable.

You can have trouble choosing between too many ideas. When you start implementing a plan, several other ideas come to mind and you quickly change your goals. The point here is that you will never be able to do anything if you continue to be so inconsistent and easily distracted.

IV. The guideline of Eight of Wands Deviant Moon Tarot

Eight of Wands Deviant Moon Tarot often shows a flight of spears or staff moving through the air in formation as if a group of hidden archers has let them fly in unison. This may refer to events that occur quickly, whether by accident or intentional purpose.

In each case, the focus is on the need for change and the challenge of keeping up with it. As the weather changes, we are constantly being forced to face change and there is no remedy but living with that in mind. So keep yourself busy and go with the flow, there’s no time to waste!

With the Eight of Wands Deviant Moon Tarot, learn all you can from your recent successful experiences. Record what worked before and what didn’t. You have awareness of how to effectively apply your imagination to shape the world in effective and aesthetic ways. As such, your proof of talent can be revealed to everyone.

Even if you have to leave it all, you know you can start all over again among complete strangers and succeed again. This valuable confidence gives you the freedom to find new directions and not just cling to past successes and achievements.