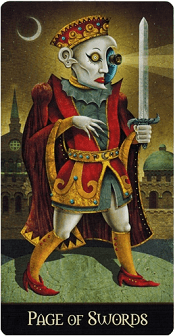 I. The Description of Page of Swords Deviant Moon Tarot

Probably a lot of people know that fortune telling by Western cards was used widely before the Tarot cards became as popular as these days. If you look carefully or pay a little attention, you will find that simplifying from 78 cards to 52 cards is very easy. Remove 22 Minor Arcana cards and 4-page cards and you will have the perfect Western deck. However, this reduction has resulted in a series of strikes, inefficiencies, and rebellions from the deck.

The simplification and understanding of these principles are essentially meant to help you carry out the spread and interpretation of cards based on Western decks when you do not have your Tarot deck there. Of course, it is not that you have to worship or overly respect your deck, because using the deck should be based on principles of research, study, and connection with it. We are fair, equal, and comfortable in reading and interpreting cards, not dependent on each other.

Returning to the Page of Swords Deviant Moon Tarot, after the King, Queen, and the Knight, the next mentioned are servants, slaves, eunuchs, maids, etc. Many names are used but it is understood as a character who does not have a royal background but possesses hidden knowledge, certain threats, royal secrets, who know precisely what is happening behind the walls.

The young servant is wandering the city. He is very good at discerning hidden truths and secrets, but people often underestimate him for his immature appearance. Obviously, recognizing Page in a story or situation is not difficult, but circumstances always make the person behave inappropriately to his own nature, causing him to fall into a dilemma.

Instead of being assigned a specific case, the Page of Swords Deviant Moon Tarot is still considered a noble. Despite possessing a royal outfit with a color no different from The Fool, Page also owns a sword for the apprentice. Maybe a better weapon for his current position or a perfect camouflage. His sword stance is ready for any situation, either an intercept or a pre-preparation.

The sword is sometimes used as a reflection, Page’s eyes always guarding the surrounding traces or minimizing the risk of an attack from behind to the lowest. A person who always observes from two dimensions of an event will have the best plans for himself. The crescent moon reminds you that this man is emotionless and his sentiments are controlled as best as possible, he will never express his feelings because the situation doesn’t allow it.

Owning one eye as a binocular – focal and long-range lens, accompanied by light emitted as a beacon, ensures scanning of every target object clearly. However, the implantation of an artificial character on Page’s body has demonstrated this incomplete nature in this person. His vision and direction are sometimes his limits. A sense of scrutiny, control, and suspicion stemmed from him.

Earth in the air is the essence of the Page of Swords Deviant Moon Tarot, a silence and certainty of earth combined with the suspension and indetermination of air. Where is the truth and its inherent correctness? Are the things you hold or Page holds all of the truth? Are we missing out on something in the night?

Page of Swords Deviant Moon Tarot reflects an abundance of energy, passion, and enthusiasm. You cannot wait to start a new project or an idea and to share it with others. You rise with a great deal of energy and excitement. However, consider whether you can maintain this circumstance or not. The Page cards offer promise, but it takes a lot of effort to keep things going.

Whatever you choose can be challenging and not everyone will be satisfied with your choice, but stick to your passions and find real inspiration. This Page encourages you to move forward and deal with any possible challenges or failures.

It shows you as a young and idealistic person, with lots of plans for the future. At this point, you feel as if you can do almost anything. However, you are just getting started on your way. Reach out to people who will nurture your ideas and will help you organize them systematically. Surround yourself with someone who is willing to learn and grant you the opportunity to develop your own personality and eloquence. You are inherently intelligent and sensitive, and you can be very much limited if you don’t deliver your ideas and feelings.

Page of Swords Deviant Moon Tarot is as profound as Queen of Swords. He has the ability to find out the truth about all matters by addressing important questions. Though he differs from the Queen in his lack of experience and maturity, so his questioning and exploration may upset others. However, he has both mental and physical agility and has all the qualities of an eager excellent learner.

Page of Swords is also about information and concepts. It is a sign that you need to appreciate and convey ideas, knowledge, and theory. They can be your own or that of someone else. It doesn’t matter as long as you are engaged in discussing, sharing, and chatting with others about these ideas. You are always finding something new and a person to share it with.

You are also gifted with words and are a good writer who is full of passion for what you are doing. Still, be careful not to join in the rumors. Since this Page loves to communicate, use this talent to benefit from others, not create negativity. You also need to be cautious about what you tell others, as it can inadvertently reveal your secrets. Therefore, protect your privacy. Think twice before you open your mouth to make sure you don’t regret what you have said.

Page of Swords Deviant Moon Tarot can also represent an impulsive child or teenager who has a relationship with you in finding information, ideas, or problems of the mind and soul. You may have tension or conflict with this person. If necessary, allow yourself a break, and come back with a fresh look. They have a lot to share with you, and despite their lack of experience, they can actually teach you something about yourself. You need to maintain their openness and enthusiasm to learn more about the world. As a child, Page of Swords encourages you to have fun with mental activity, including learning, exploration, and research. Enjoy the world of thought and mind.

The downside of Page of Swords Deviant Moon Tarot is the chaotic nature of intellectual discovery and inspiration is not guided by experience and wisdom. This Page can be one of protecting, defending its ideas, the other is finding and attacking victims with the rational double-edged sword. Perhaps he is looking for an intellectual confrontation or a desire to prove his superior spirit. The problem is that he is not mature enough to express himself in a positive way, leading to overconfidence and extravagance.

On the contrary, the reversed Page of Swords Deviant Moon Tarot may say that you are acting hastily, without thinking carefully. You have a lot of energy, but you cannot use them effectively. It is better to do things one at a time than do it all at once.

It also warns against promising things that you cannot fulfill. You have to be very careful when making commitments you cannot keep, or saying things you will regret. Make sure you can do everything to protect your reputation. Also, stay alert to other people’s commitments to make sure they will deliver them. This Page, when in reverse, can also refer to someone who always claims “I know it all” and tries to impress with glorious stories about their past and their achievements that you later find they only exaggerate the truth.

The reversed Page of Swords Deviant Moon Tarot may also indicate that you are starting to constantly bother others with challenging questions. When trying to understand a situation or a concept, ask in a knowledgeable manner with a polite attitude. Be aware that you might disturb others by repeatedly asking, “Why? ” Challenge other people’s ideas, not their endurance.

Finally, the reversed Page of Swords Deviant Moon Tarot shows a fear of public speaking. You worry that you don’t have the experience and knowledge to speak on a particular topic, or that you are afraid of being the center of attention. Know that people simply want to hear your point of view, even if it is unfamiliar to them.

IV. The guideline of Page of Swords Deviant Moon Tarot

This card has traditionally been called Page, but in some modern decks appears as a Princess. The traditional interpretation is about a messenger, ambassador, or liaison between separate camps, whose job it is to faithfully represent one party’s communications with the other. Because of this role, we do not think of this person as a servant, but as a diplomat, which facilitates sensitive negotiations, often under difficult conditions.

This person is acting as his patron’s ear and eye, and as such, he is sometimes referred to as the Guardian. Even the kings are helpless if this messenger chose to use his access to sensitive information for his own gain, as implied by his other name, The Spy. He may even be working as a double agent, playing both sides against each other to serve his own agenda. His title is actually disguised, acting as a protective color so he can move between unrecognized people, collecting information anonymously. His vigilance often conceals a hidden motive. He is a stalker who has to keep an eye on himself, because he dreams of one day solving the problem on his own, ahead of his master’s plans.

When the Page of Swords Deviant Moon Tarot appears, the situation requires a subtle change in order for it to be of the highest benefit to all involved. Contrary to times when people can best serve the better by being bold and heroic, it is time to keep your own advice, cover your tracks and stealthily accomplish what would be impossible to complete without privacy. Reduce your profile and increase your anonymity, regardless of how your self-image may be affected. While it would be fun to get what to do and get ahead of it, that is not the current priority.