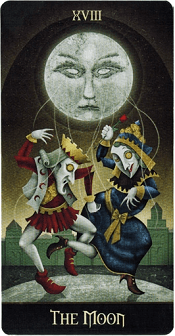 I. The Description of The Moon Deviant Moon Tarot

On the Moon Deviant Moon Tarot card, the bright moonlight shines a strong light enveloping the capital. That magical light controls the inhabitants like a puppet operator. Talking about the true meanings of this card, the first impression is that of the character’s depictions. The faces like masks raise the question of are we living like puppets? Each of us sometimes does not really act or expect the audience in the musical of our life, but simply try to act up to the dreams and ambitions that those around us are putting the script in our hands. We cannot blame anyone because out of the sweat on the stage, there is still applause and smiles, and the stage light is still shining on you.

But deep down, there are still things that we attach to them the word “instinct”. Things that when they exist, have followed you. And the artist is still ready to show off his talent, and that’s when only us or those who really understand will join us on the stage of moonlight.

Why moonlight and not something else? Moon is one of the planets that is directly affected by and affects the earth after the sun. If the spotlight is sunlight, imagine yourself standing in front of an extremely powerful headlight beaming right into you, and assume you’re willing to strip it all out to show things that people call instinct. There will be praise and criticism at the same time. And that’s when the night comes, as an accomplice to the moonlight. The light is gentle and spreads moderately so that each person can clearly feel himself and perceive all the emotional levels, and it’s also mysterious enough to distract people.

When emotions sublimate and everything around us sinks into a fanciful black, we act the way we want. Imagine when the lights in the theater were off, whether the artist would act in the night or the only place illuminated by the moon, which unseemly satisfied them, gently caressing their souls. And people are deliberately controlled from the moment they are not even aware of.

Everything is sharper than ever in the Moon Deviant Moon Tarot card. Do you find yourself more and more receptive to the meaning that The Moon gives you? There have been a number of articles that delve deeper into Patrick Valenza’s proposition when he designed these cards. One of these is the gender of the figures in each card. It is not natural that a character in any Deviant Moon Tarot card is a male, female, a demon, or an interference.

On this card is an image of a man and a woman. It implicitly states that regardless of gender, once they are human and have emotions, they will all be manipulated by The Moon. More deeply, that man and woman are dressed in splendid costumes and adorned with iridescent ornaments, showing regal. So no matter how rich or poor, noble or vile you are, you will be manipulated by the moonlight.

The two figures on The Moon Deviant Moon Tarot are fervent and inseparably intertwined. In the hand of the woman holding the rose, a symbol of love and beauty, her face expresses the happiness and enjoyment of pleasure to the point of forgetting about reality. The man is a bit soberer with a surprised expression, but he still cannot control himself and is fascinated by that woman.

The thin silk threads are like the wind. The moon has never been so prominent. It is clear that in this situation, the woman is more defenseless. Science also proves that the full moon or mid-month is the time when women have certain emotional and hormonal changes in their bodies. The woman’s fervor is again concealed by a dark blue color, and the crimson color of vitality, temptation, and ambition are ceded to the man – a pigmented color to the point of becoming ghostly.

The moonlight wears a dark robe, embracing the capital and its people. It shows only its face, gazing at the couple with blank and lifeless eyes. Its eyes seem like it doesn’t see, however, capturing everything it can without missing a single detail. Its lips tightened without saying a word. Everything just moves in the seemingly harmless mind and face. The threads control like the wind blowing through each person’s faces.

It is not surprising that The Moon Deviant Moon Tarot owns Pisces zodiac with the planet Moon as the master. Both the zodiac and the impacted planet are emotionally dominating as the water flows uncontrollably.

II. The general meaning of The Moon Deviant Moon Tarot

The Moon Deviant Moon Tarot card warns of lies, dishonesty, confusion, threatening situations, self-deceit and fantasies away from reality. Some of these meanings have already existed in the astrological relationship of this card which is the relation of the Pisces with the twelfth house of the horoscope – the house of confinement and destruction, these meanings mention spiritual consciousness and the concern for the disadvantaged people.

During this time, you have to confront the unconscious to continue to step forward. Uncertain or hidden matters will soon be revealed. You can take advantage of your creative talents in composition, art, psychology or psychotherapy. Traveling especially by waterway is likely to happen.

You notice discipline that has been ingrained from the past are influencing your current behavior. Also, you should pay attention to your dreams, feelings, and intuition. It is important to be aware of what is mysterious in the past. Your intuition can be much more reliable than you have ever thought. The perception of the psychological aspects of human existence now plays an important role in your life. The Moon Deviant Moon Tarot card requires us to reflect on our origins in the animal world and in the collective unconscious.

This Deviant Moon Tarot card also refers to a state of profound sensitivity and imaginative ability which are developed during a period of deep relaxation. Here we dream and enter a state of hypnosis, have visions and deep insights, immerse ourselves in spiritual cascades, and experience profound or terrifying paranormal realities beyond our ordinary senses. In an open state of consciousness, we cannot always control what happens. Finally, it represents the ultimate test of the integrity of a soul, where the barrier between the self and the unknown is removed, and individual relaxation returns to the ocean of existence. What happens next is between a soul and its creator.

III. The reversed meaning of The Moon Deviant Moon Tarot

The Moon Deviant Moon Tarot card usually represents fear, illusion, and panic which are things that come from the dark side of the night. It is easy to fall out of track under the moonlight, therefore, be careful not to let these deceptive conceptions mislead you.

This is the time to clarify everything. Do not make any significant conclusions until the chaos ends. You will soon be able to clearly see the facts. In this process, you may need to confront your own barriers. Some complicated problems have now become obvious. You start to acknowledge a hidden enemy or threat that may ruin your happiness. Besides, you will have to work hard to protect against fraud, vandalism, delusions, and excessive use of stimulants.

This is still a highly spiritual time to take recovery therapy or other useful ways of spiritual activity. You are more inclined towards spirituality than normal. The reversed Moon advises you to pay attention to your beliefs and feelings, especially to conflicting information which you don’t know their origin.

The reversed Moon Deviant Moon Tarot card also shows that you may be deluding yourself, exaggerating, or embellishing your account of the circumstances. Consider whether you are repeating an emotional, dramatic representation of the events instead of following the naked truth. The temptation to get caught up in your emotions or soul is understandable, but it doesn’t help you find your own balanced center in times of turmoil.

IV. The guideline of The Moon Deviant Moon Tarot

The Moon Deviant Moon Tarot card recommends that you trust your instincts and intuitions. Your intuitive body, connected to every being, is sharper and faster than your cultivated and cultured self. The everyday mind may not be prepared for strange situations. Your intuitive mind will assist you without fatigue if you don’t interfere or try to control what you notice. A better approach would be meditation. Try to be just a witness. Do nothing and let nature bring you forward. This might be your best option in this situation.

Your life is wavelengths dominated by emotions. The reciprocal and emotional influences along with your narrow-mindedness make your mental state unstable and out of balance sometimes. In return, wealth is a factor that is always solid for you. Building relationships based on intuition has material benefits for you. You are not too rich, but not in need.

Because you are a person who is entirely influenced by emotions, your mood easily swings, and problems with your health can arise. It is relationships that cause you to experience confusion and anxiety. The Moon Deviant Moon Tarot points out that you should be more vigilant about your health.

In terms of romantic relationships, you are always assertive, good at communication, and dominant in your relationship. Besides, you also treat your partner fairly and acutely.

Your trips are hardly planned in advance. You are always confident in your abilities, so everything will be well arranged, whether it’s near or far.

In your career, you work on feelings, although sometimes you are conservative and hold your stance, your advantage is to see things realistically, make specific plans, and achieve tangible benefits.

Your friends give you a lot of encouragement. Even without constant inquiring or contact, they are loyal and available when you need it. You can behave in a completely comfortable and true way when you are with them.

If being involved in law issue or material dispute resolution, it is not too much of a concern for you. You will use your sensitivity and dexterity to turn things around. Everything will be alright the way you want them to be.

According to the Past Lives Osho Zen, the hand of the creator appears in the shape of the female vulva, the opening of the cosmic mother. Inside, there are many images, faces of the times revealed.