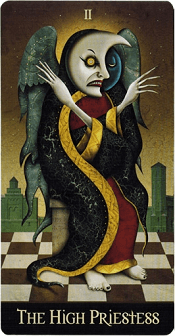 I. The Description of The High Priestess Deviant Moon Tarot

The High Priestess is like a winged god guarding the city. She protects the source of knowledge she holds inside because wisdom must be cultivated and accumulated from the challenges of life. To the third card, The High Priestess – a nun: Why a nun and not another card. Is it true that after the darkness of Pandora’s box, one has to find the figure of purification and that is the Nun?

The first thing when it comes to this Deviant Moon Tarot card is that after the two Major cards with the presence of two male images, there is the appearance of a woman. It is worth mentioning that because this image is not entirely male or female, it is a certain interference.

The Deviant Moon has transformed and gradually pushed the basic features into modifications that adorn the character’s image. There is no Tree of Life behind the nun anymore but instead is the background of the city. The nun’s face is a combination of a half-moon and full moon, this is probably the author’s intention. It is the combination of The High Priestess’s hat in the standard deck, moreover, the half-moon is the color of light and the other half is the color of darkness. The author has hidden these two details on the face of the character.

It is clear that The High Priestess Deviant Moon Tarot, despite possessing this bisexual face, the author tried to hide the bright face ahead, and tried to preserve the purity of the Priestess in this magical deck of cards. “She” covered her hands in front of her chest as a defense and hid something inside – perhaps the secret of darkness and light. The variant had reduced details quite a bit. The High Priestess no longer holds her “Torah”. According to some documents, The High Priestess is also in the “trio of power” – along with The Hermit and The Hierophant.

Going back to the final details on The High Priestess Deviant Moon Tarot: the angel wings. Many people often think that when it comes to wings, they will remember the image of angels, but in fact, there are also demon wings. But one thing is for sure, the High Priestess’s wings are god’s wings because of its sparkle and toughness. The final detail is the color: warm red and black. If in The Magician, how black was analyzed, when combined with the warm red – the color of the wine and the blood, it will be darker.

The mystery, the hidden factors, the desire to hide, and the skepticism as well. The golden color of power and dignity always shields this figure, but sooner or later, this person will come out.

The High Priestess is a Major Arcana, also known as the “trump card”, representing human intelligence. The High Priestess can be seen as a kind of Pope (a Papess), or the Isis Priestess of ancient Egypt, the Goddess of snake and bird, and even more, the Greek goddess Persephone, or Eve, before fall.

To heretics accused and burned alive for venerating Her in the 14th and 15th centuries, the Priestess represents the prophecy of the return of the Holy Spirit, regarded as the feminine aspect of Trinity.

Regarding the order of the Major Arcana cards, The High Priestess appears in sequence just as Fool decides that he wants to develop his innate powers, progressing to become a Magician. The High Priestess is his first mentor, representing the inner life and the method of contact with it, as well as contemplative research on nature and spiritual mysteries.

Keywords and extensions: Ignorance, Lack of vision, Hide true feelings, Misuse of reason, Act biased or prejudice, Superficiality, Exaggeration, Lack of emotional control, Underestimate dreams and intuition, The explosion of hysteria, Not use the natural talent, Afraid to listen to the inner voice, Short-sighted, Overconfidence on the judgment of the outside.

The reversed High Priestess Deviant Moon Tarot card shows that when you have problems, it is often because you are so attracted to your inner life that it becomes an obsession itself. It dispels your concern with ordinary reality, friends, and family – the connections that keep us fast with our mortal identity.

Do not take this Tarot card as a right to renounce the world. This is a reminder to balance your external identities with your inner cultivation so that you can bring the spiritual world into the physical world more effectively.

IV. The guideline of The High Priestess Deviant Moon Tarot

The High Priestess Deviant Moon Tarot recommends that you adhere to your chosen spiritual practice on a more frequent basis. If you want the benefits of evolution, you will have to cooperate with the spirit. We all have distractions and demands – a whole life full of reasons that prevent us from finding time to retreat into our inner sanctity.

Until you consider this to be as important to your health as your need to eat and sleep, you will likely experience permanent restlessness and discontent. A spiritual habit tailored to your temperament, practiced every day, is the most reliable path to freedom.

In terms of your life, The High Priestess Deviant Moon Tarot tells that you influence and stand out primarily emotionally. You have had quite a bit of experience or started many romantic relationships, but all of them are just flings. These relationships often come at the same time and do not affect you very much. Conservative nature, stubbornness in emotion, mood swings, combined with the delusion of other people’s feelings for you, you are easy to be arrogant but superficial.

The High Priestess Shadowscapes Tarot raised her hands, and in this posture, her body became a symbol of a holy grail. The owl represents the knowledge keeper and carries a key that can decipher secrets. Pomegranate is a symbol of Persephone, the daughter of the Goddess Demeter.

The High Priestess Rider Waite represents wisdom, serenity, knowledge, and understanding. This character is often described as a guardian of the subconscious. She sits in front of a thin veil of awareness, which separates us from the inner within ourselves.

The High Priestess Linestrider is the connection to the subconscious mind through symbols and dreams. She represents wisdom, knowledge, peace, and understanding, and is the protector of the subconscious.