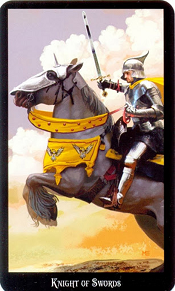 I. Keywords and corresponding associations to the Knight of Swords Witches Tarot

II. Meaning of the Knight of Swords Witches Tarot

The handsome young Knight of Swords Witches Tarot and his steed are rushing into battle. The knight’s right hand holds a sword because he confidently enters the confrontation. In his left hand, he gently holds the reins of the mighty Friesian. He has control and is doing very well. The Knight of Swords is a dangerous, pompous, and aggressive warrior. The visor is on top of his helmet, allowing him to see what is going on unobstructed. Pale yellow robes flutter behind him. His fine armor is dark silver with blue highlights. The knight’s cloak and the decorative tassels of the horse’s bridle are both yellow and feature the emblem of the hawk, symbolizing eagerness and a sense of pursuit. The colors and badge clearly depict the knight’s connection to the air element. In the background behind the knight and horse, we can see storm clouds rolling over the steppe.

The Knight of Swords Witches Tarot is all about courage, drive, wisdom, bravery, and devotion. The air element accelerates the speed of perception. The knight’s strength and motivation to move forward are clear. He is a brave man and his ideals and beliefs push him forward. He fights for what he believes in. This Knight describes the best qualities of the Swords suit that are balance, energy, intelligence, and direction, along with responsibility.

III. Message of the Knight of Swords Witches Tarot

If we have to summarize this Court card in two words, it will be “not afraid”. If the Knight of Swords Witches Tarot appears in a Tarot spread, you can expect excitement, movement, and adventure. It takes action and is the time to step in and be a hero. This Court card can represent a guy with spiky hair and gray or hazel eyes full of passion and excitement. This is a person who is skillful and capable in times of crisis. He is bright, active, and possesses a sharp intellect. He can be a little arrogant, but that is part of the appeal. This is the card of the soldier and the warrior. The Knight of Swords will appear in your life, bringing discovery, communication, new ideas, and change.

The challenge from the Knight of Swords Witches Tarot is that you have to fight for yourself and your beliefs. Rapid movement and transformation will hit your path, so be persevere and enjoy the ride. On the plus side, the Knight of Swords is a master of logic and reason. He has a sharp mind that makes it easy to get to the heart of any problem. He speaks clearly and frankly and is always powerful. His judgment is firm and unaffected by emotions. Others relied on his insightful analysis of the problem and its solution.

On the negative side, the Knight of Swords Witches Tarot does not specialize in diplomacy. He may behave unscrupulously and indecently. When he thinks you are wrong, you will know it. He fantasizes about his good qualities and has no tolerance for stupidity. He expects others to follow his point of view. To him, all feelings are inadequate and illogical.

In a Tarot spread, the Knight of Swords Witches Tarot shows that his sharp demeanor is relevant in the situation as an aspect of you, of someone else, or of a general atmosphere. You need to ask yourself whether this knight’s energy helps you or will it hurt you? If his style is clear, then the balance is essential. Do you always impose your position on others? Do you get in trouble for saying what you think? Is your lover too cold or becoming alienated from you? Do your colleagues tend to criticize instead of supporting you? This may be the time for a change.

If the energy of the Knight of Swords Witches Tarot is lacking, you may need clarity. Are you too emotional? Let your mind control your heart next time. Do you overestimate other people’s opinions? Believe in your abilities. Are you afraid of opposition or dare to speak your mind? Let the Knight of Swords bring into his world of reason and confidence.

IV. The Knight of Swords Witches in a Tarot spread

A rider is galloping on a white horse, holding the reins in one hand and a sword in the other. At first glance, he seems to be facing many obstacles to move forward, but upon closer inspection, he is actually enjoying himself. The Knight of Swords Witches Tarot is one of the few cards in which the positivity of the sword can be easily discerned. The horseman has the attitude of “everything is possible” which is necessary to move forward in life. When this card appears in your Tarot spread, you can expect a great deal of energy and happiness to come into your life. He represents recklessness, a little carelessness, treating light precautions like the wind and daring to take chances.

Unlike some cards of the Swords suit, the Knight of Swords Witches Tarot actually brings rather optimistic and joyful energy. The Knights usually mean that someone or something worth looking forward to is coming to you. The Knight of Swords also indicates that mental, emotional, and physical energies are at their peak. If you are waiting for news from someone or something, then it is likely you will get what you want to hear. Knight of Swords can come with a lot of activities like traveling, meeting friends, accomplishing something. You don’t tend to feel like you have to wait for anything to happen to you, that is fine. Follow the call of your heart.

The Fool works very well with the Knight of Swords Witches Tarot. This combination is a sign you can use this burst of energy to explore new paths that few dares to take. Dare to think beyond the stereotypes because then you will gain the upper hand and move forward. Your unusual approaches in the meantime have the potential to propel you forward without worrying too much about whether it fails. The Knight of Swords when accompanied by the Nine of Swords means that there is a lack of communication. If you see this duo in this situation when you have been talking to your partner recently, these two cards mean that your opinion is not very right. You will have to put yourself in the other person’s shoes if you want to make up for your mistake.

In terms of work, when the Knight of Swords Witches Tarot appears in a Tarot spread, this is an especially good sign if you are looking for work. A job you have been longing for may suddenly come to you. If you are working now, you will find yourself a little busier in a positive way. You will accomplish so much that it makes your peers inferior. It is mostly their problem, but don’t get upset about it.

In terms of love, you may be about to fall in love with someone whether you are a man or a woman. If you are currently in an emotionally engaged relationship, then this relationship is likely to become brighter, deeper, and more satisfying. If you are looking for love, it may come faster than you expect. However, you must stay in touch with the person who is ready to open their heart to welcome you into the rose garden of love. Freshen yourself up and go on a date with that person. You will have a lot of fun.

In terms of finances, your current situation looks very optimistic when the Knight of Swords Witches Tarot appears. You may receive an unexpected amount. But remember not to spend them all in one place. Reinvestment would be a better option. Keep doing what you’re doing. Share your abundance in any way you can.

In terms of health, the Knight of Swords Witches Tarot implies relatively good news, but you might be advised to slow down a bit. Follow this advice. The Knight of Swords has a relatively complex element of energy and behavior. However, it can be beneficial to learn more about what is causing you to be unwell. You can control your own healing energies at this time.

In terms of spirituality, the appearance of the Knight of Swords implies a need for a quiet space and a suitable place to deepen one’s spiritual knowledge. It is very difficult to increase psychic abilities if you keep walking around aimlessly.

The reversed Knight of Swords Witches Tarot can mean that you need to be wary, especially with newcomers. Someone may come to you insincere. Even though they are not necessarily a literal bad guy, they bring wicked energy, information, or ideas. If this card appears when you are about to take a trip somewhere (travel), be prepared that the trip may last longer than you want or expect. Be careful about sharing information in any way. Remember email is generally not secure and nearly any phone conversation can be overheard or recorded. There is no need to be overly concerned, just be careful.