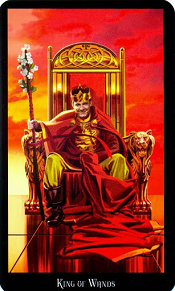 I. Keywords and corresponding associations to the King of Wands Witches Tarot

II. Meaning of the King of Wands Witches Tarot

On the King of Wands Witches Tarot, we can see a handsome middle-aged man with titanium-colored hair sitting on a throne. His light blue eyes stare straight ahead. He only smiles slightly. This King is leaning toward you with full enthusiasm, energy, and generosity. He enjoys and wants to be a part of your plans and goals. The King of Wands wears a royal red tunic with a defensive lion on his chest. In heraldry, the lion represents royalty, courage, and strength.

His hot-colored robes are exquisite and fit for a king. His crown is enormous of gold and encrusted with rubies. In gem spells, rubies are used to sharpen the mind and enhance perception. Around his chest is a large chain made of gold and studded with rubies. In his right hand, he holds a blooming hawthorn wand. Red ribbons droop from the staff.

In the background, the sky is in creamy yellow and red as if the sun is about to rise representing all the new possibilities of a new day. This particular king rules with power, passion, honesty, integrity, and chivalry. As accurately depicted in the card, the king has difficulty sitting on the golden throne. He is a man of action and performs best when thinking decisively and taking things seriously.

III. Message of the Queen of Wands Witches Tarot

In the traditional Tarot deck, the King of Wands Witches Tarot depicts an emperor sitting on a throne above a marble platform. His royal robes wrap over the arm of the throne. The emperor is glaring in the distance. His facial expression is calm and unaffected by anything around him. Adaptability and creativity are hallmarks of the Wands suit, so the King of Wands is no exception. In fact, this card is also considered a very positive sign for your current situation. Sometimes in life, the King of Wands represents a man who has a positive influence on you. Either way, you can expect a state of great energy and luck when the King of Wands appears.

When the King of Wands Witches Tarot appears in a spread, notice any blond man of the fire zodiac sign. He may be an entrepreneur, a leader, a proponent, and an agitator. He is open, outspoken, charismatic, and confident. This is the man who can do it all. He has a successful career. He trains his children to be on the Junior League team while keeping his marriage alive. This man is happiest when he is engaged in many activities at once. He is sincere, trustworthy, and passionate. And if he gets angry or upset, he may struggle to stay calm. This card also represents creative language and fighting for the ideas and dreams of others. You may find that an investor or partner for your future venture is closer than you think. Or you yourself may be a passionate supporter of someone else. Creative and artistic capacities are higher than ever.

The personality of the King of Wands Witches Tarot is a combination of the positive fire energy of the Wands and the energetic and outgoing personality of a king. He is creative and never rests even in old age and a state of weakening health. He believes in his creativity and allows his inspiration to flow. He always steps forward and leads in every way if given the opportunity. Others follow him as he confidently shows them the right path. He is a strong man in pursuit of his goals. He is not a man who just passively observes unless it suits his purpose. He just always knows how to do things and generate results. He has the ability to impress and create excitement.

The King of Wands Witches Tarot is never the one to stay out of the story, but instead, he is the center of attention. He is daring and not anemic of recklessness. He avoids playing it on safe and smooth roads because he has the energy and confidence to take risks and conquer victory. The King of Wands knows how to defend his point of view and always believes in himself.

In tarot spreads, the King of Wands Witches Tarot asks you to act within your power. For example, creating masterpieces, leading, taking risks, or generating attention. This King can also represent a man or woman doing such actions or depict an atmosphere of excitement, boldness, and intensity. He tells you that his particular flow of energy is very helpful to you right now. Let yourself be inspired by the King of Wands in whatever form he comes into your life. The lesson of the King of Wands is energy and enthusiasm which will help you achieve artistic and creative goals. Be generous and supportive to everyone in your life.

IV. The King of Wands Witches in a Tarot spread

In the traditional Tarot deck, the King of Wands Witches Tarot depicts an emperor sitting on a throne above a marble platform. His royal robes wrap over the arm of the throne. The emperor is glaring in the distance. His facial expression is calm and unaffected by anything around him. Adaptability and creativity are hallmarks of the Wands suit, so the King of Wands is no exception. In fact, this card is also considered a very positive sign for your current situation. Sometimes in life, the King of Wands represents a man who has a positive influence on you. Either way, you can expect a state of great energy and luck when the King of Wands appears.

Often associated with the zodiac sign of Sagittarius, the King of Wands Witches Tarot implies a wise, open, adventurous masculine energy source. Like all Court cards, the King cards can generally indicate a real person in your life. That person is usually a man. When the King card appears, you seem to have a burst of energy that is ready to be used in a positive direction. Even if the card does not represent a specific person in your life, it still implies that a certain man around you always wants to give you help and give you good thoughts. You will feel ambitious and goal-oriented among other things. You will have enough financial resources to accomplish what you are imagining.

When the King of Wands Witches Tarot appears in a spread with many other Wands cards, the message is that your creativity is the answer to your question. If you are feeling like you have exhausted all options, look for different ways to approach the problem. When the King of Wands pairs with the Lovers, this indicates that you are in a good position to meet someone new who is properly your other half. This is a good sign for marriage or for a honeymoon.

In terms of work, the King of Wands Witches Tarot can refer to a man who is capable of mentoring you. This is someone you can trust, although to some extent, his human skills may be a bit lacking. Learn what you can from him. At the same time, focus your attention on what you want yourself to take in a different direction from him. All in all, things should be done wisely. And if you are looking for a job, the King of Wands will be a very positive sign that you are about to get a new job position that you will be satisfied.

In terms of love, the King of Wands Witches Tarot is a great sign. He implies that someone you are interested in also feels protective and caring about you. They also want to do the best they can to facilitate the development of the relationship with you. You may be focusing more on your work/career at the moment, but make time for your love line. Otherwise, you will lose your chance.

In terms of finances, this card is a completely positive sign. You may discover an ability you did not know you had which could generate a lot of money for you. If you have been thinking about starting your own business, this could be a great time to start. However, do not jump into an area or investment if you have not already yet. Read, research, and talk to others about doing what you think you want to do. Be brave of big dreams. Your courage is always powerful and worth a try.

In terms of health, the King of Wands Witches Tarot is a message that is full of vitality. But at the same time, the card also carries a warning not to overdo it or use your body’s strength beyond practical capacity. Rest and recovery are also an important part of being healthy. Take the time to double-check what you really feel. Anger and negative emotions may not be good for your health right now. Alway keep a positive thoughts as possible.

In terms of spirituality, the King of Wands Witches Tarot is a sign that you are ready on the path to discovering your spiritual side. However, these are also warnings of a possible tendency to neglect and push things too far. Spiritual development is a process that cannot be achieved overnight. Allow yourself the time and space to do that. If sitting still and meditating is too difficult for you, you need to put in the time and effort to do those things. Let’s start with 30 seconds. All you need to do is focus. Meditating while walking can also be very effective. In short, do what works for you.

The reversed King of Wands Witches Tarot can represent the image of a man who has been through many years in his life. Therefore, he is generally a warm, kind and understanding person. He himself has a great source of energy. However, as an experienced man, he has begun to understand that not everyone can match him in many aspects. When this card does not refer to a real person in your life, it may imply intense feelings and a tendency to be tolerant of others. If this connotation reminds you of your children, think carefully whether tolerance is the best answer for them. In general, the reversed King of Wands is a positive card. The people around you seem to be kind, tolerant, and generous. You will need more energy than you think to be able to accomplish your goals. In addition, this card can imply that an elderly man will play an important and beneficial role in your life.