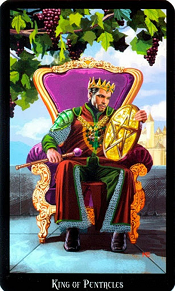 I. Keywords and corresponding associations to the King of Pentacles Witches Tarot

II. Meaning of the King of Pentacles Witches Tarot

The handsome King of Pentacles Witches Tarot sits on the outdoor paved patio and rests his back comfortably on the royal purple cushions on his throne. He has dark hair, a neat beard, and mustache, dark brown eyes, and wears a gold-leaf crown studded with emeralds. The King of Pentacles holds a large coin in his left hand and looks down at it. His right-hand rests on the handrail and holds the golden staff. The King of Pentacles wears a simple necklace of gold with emeralds. Emerald is a stone of inspiration and perseverance. We see chains lying under the king’s robe, showing that he is the ruler. He still has the skills needed to protect his land and his people.

A symbolic white deer, commonly known as a fawn, appears on the king’s chest. According to symbology, the white deer is the symbol of the Court. Behind the King of Pentacles Witches Tarot, in the distance, we can see the castle watchtower. When castles appear in the Tarot, they show us the quest for knowledge and progress has been completed which is consistent with the last card in the Minor Arcana. Around the king is a vine laden with ripe purple grapes. The vine and the grapes symbolize prosperity, abundance, and family happiness.

III. Message of the King of Pentacles Witches Tarot

When the King of Pentacles Witches Tarot appears in your Tarot spread, you should know that hard work, determination, and success are on the way. The King of Pentacles represents a man with dark hair and deep brown eyes. He is easygoing, responsible, and, most importantly, practical. As a man of the earth zodiac sign, he is healthy, steady, and mature, and knows how to enjoy the simple pleasures in life. He is a generous and helpful husband, affectionate and loyal. He definitely is a caring father who sincerely enjoys his children. This man is successful, practical, and satisfied with his life. He is a skilled craftsman who enjoys gardening, sightseeing, farming, or carpentry. He is happiest when working with the land or doing something with his hands. He works hard and achieves comfort and success.

The nature of the King of Pentacles Witches Tarot is a combination of the positive energy of the Earth element of the Pentacle suit and the energetic, outgoing quality of the King. The king in King of Pentacles can be likened to King Midas when he turns everything he touches into gold which shows wealth in all aspects. He finds opportunity everywhere and succeeds with anything he can think of. He is a bold and experienced man. No matter what the task, he can solve it perfectly based on practical skills and knowledge. He knows everything and is well versed in all areas. He is reliable and responsible. Others rely on him completely because they know he will never let anyone down. He is very relaxed and generous with his time and money because he knows that the more he gives, the more he receives in return. He encourages others to achieve their own achievements and gives them all the support and assistance whenever they need it. He is a man with a stable and calm temperament which contributes to establishing stability in any situation. When he sets a goal for himself, he will pursue it with unwavering determination until he succeeds.

IV. The King of Pentacles Witches in a Tarot spread

The King of Pentacles Witches Tarot is a card that deals with trust, tradition, and success in matters related to money. When appearing in a Tarot spread, this card is a sign that this is not the time to break, but it is when you need to follow the established ways and ways in solving all life problems. When the King of Pentacles represents a person in your life, it will generally be a very masculine person.

In general, the King of Pentacles Witches Tarot urges us to quickly become good servants in terms of both our own lives, the energies, and the specific resources we can use. If the card shows a man in your life, that person is likely to be someone you can rely on and trust completely.

In the traditional Tarot deck, the King of Pentacles looks rather confusing. On the card, we see a man sitting on a throne, holding a golden scepter in one hand and a large coin in the other. Above him are clusters of grapes. Even though his territory is invaded by plants, his face remains calm. The symbolism of this card is very important. The vine represents fullness, change, luck, as well as many other things. The king in the card emphasizes calm amidst the chaos that surrounds him. When the King of Pentacles appears in your spread, it brings good news and peace. Since this is a Court card, the King of Pentacles can sometimes represent a specific person in your life. This person highly appreciates the spirit of hard work as well as being considered the head of a group.

When the King of Pentacles Witches Tarot with the Tower, the Shadow Side, or Death cards from the Major Arcana, it indicates that turbulent events do not have much of an impact on your life as they appear singly and have no connection with the others. The King of Pentacles is a protection when you face difficult times. There will be light at the end of the tunnel, so you can rest assured. The pair of King of Pentacles and Queen of Pentacles is a sign of a harmonious relationship, especially in love. This is considered a divine duo, so the simultaneous appearance of these two cards is considered extremely favorable for someone looking for their significant other.

In terms of work, there may be a mature, reputable man who will play a key role in your work environment, even if you are working in a place where there are all women. This man is wise and fair but is a little hasty in judgment. This person can become your trusted support no matter how long you have just met him. Always be ready to scrutinize everything, you will have peace of mind when you are.

In terms of love, the King of Pentacles Witches Tarot is a good sign when it comes to romance. Someone may appear and catch your attention at first sight. Go ahead and follow your heart, but don’t try to be someone other than yourself. This person will only love you for who you are. Be honest and everything will work out for you. If you are in a committed relationship with someone, then it is more likely to evolve into an even more engaging state. But if you don’t feel good about anything in this relationship, then you need to say it in order to expect a change. Don’t expect your partner to obviously know what you are thinking.

In terms of finances, the King of Pentacles Witches Tarot brings good vibes only. Nearly all of your investments are going very well and are even more profitable due to your efforts or wise investment practices. However, this is still not the time to think hastily. Take calculated risks, but don’t fall behind. Share your wealth when you feel you should. Remember that money is still money, it is not something you are able to carry around forever.

In terms of health, your well-being can improve if you dare to face and release your negative emotions. However, you need to be very clear on how to deal with these negative emotions, as well as be well aware of where and when you will do so. Cultural traditions and cleansing rituals can help you feel somewhat more at ease at this time. What comforts you mentally and spiritually will also comfort your body. What health rituals are you adopting? If you have not tried any of these methods before, experiment until you feel comfortable. Your health will benefit greatly from such treatments.

In terms of spirituality, you may not have a clear understanding of what it takes to fulfill your mental well-being. Perhaps because over the years you have devoted your mind primarily to securing a stable financial source for your life only. Think again about this for a moment. If you don’t have any conceptual background in spiritual culture, look to the Internet or your local library to learn about new sources of thought. Take time to nurture your spiritual side. Believe it or not, your financial situation will benefit as a result.

The reversed King of Pentacles Witches Tarot can speak of a number of disadvantages. He is overly concerned with material things, including good food, wine, or sex. This idealism can be extreme. He is also very stubborn, determined, and even upset about something if he gets it wrong. The King of Pentacles in reverse is a man who will do anything with money. He is very fond of social status and is willing to use the money to buy. At the same time, he does not care about those who are not in the same position and can consider them invisible. He tries to prove himself by bragging about the people he knows. He may even marry for money and quickly divorce after draining their assets. This King shows fear of making a commitment or a desire not to commit to anyone. He is not as reliable as you might initially think, and instead, he is tightly controlled and extremely patriarchal in your relationship with him.

The reversed King of Pentacles Witches Tarot indicates extroversion, that is, a tendency to like to prove oneself by external achievements without realizing that the self also has great values. No matter what happens in your life when the reversed King of Pentacles appears, you need to know that happiness and success will not be built from just one or a few events. This is the time to cultivate a positive attitude.