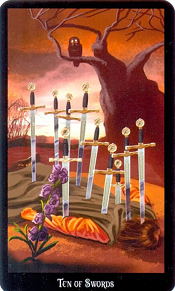 I. Keywords and corresponding associations to the Ten of Swords Witches Tarot

II. Meaning of the Ten of Swords Witches Tarot

On the Ten of Swords Witches Tarot, we can see the dead man lying face down on the grass. There are ten swords stabbed into his back. He has brown hair and wears a gray jacket. Behind him is the setting sun. On a twisted branch, an old owl with bright yellow eyes is watching the carcass. The owl, also an air elemental creature, is a classic symbol of magic, mystery, and inner wisdom. The background picture is unusual, dark, and dangerous. There are so many swords stabbed on the man’s back that it has to be a group of people to do this.

The absence of blood in the Ten of Swords Witches Tarot reminds us that this is a symbolic and unreal action. The man depicted here believed when he shouldn’t have or ignored his own instincts. Now he has to pay the price of being betrayed so many times. There is a lone purple aconite plant growing near the corpse. In the language of flowers, aconite warns that a deadly enemy is near. Apparently, this man did not heed the warnings of this poisonous plant.

III. Message of the Ten of Swords Witches Tarot

When the Ten of Swords Witches Tarot appears in a Tarot spread, you must ask yourself why don’t you listen to your instincts earlier? This card is a vivid description of being stabbed from the back. This represents a betrayal by a close person, friend, or group member. This is what happens when you ignore your inner voice and intuition about something being confused. By ignoring the warning signs and not heeding your instinct that trouble is lurking, you pay the price. This card also symbolizes being associated with a toxic group of people, such as a work environment or even a group in which you are unloved and feel abandoned. If your instincts are warning you not to belong there, then be tactful like an owl and find a way out of that group and all its afflictions.

The Ten of Swords Witches Tarot is a card of terrible misfortune. Surprisingly, it often represents “reformed” troubles rather than real ones. The man on this card is stabbed in the back by many swords. In fact, can anyone stand it? Are ten swords too much? Perhaps this man suffering is only being magnified.

One of the meanings of the Ten of Swords Witches Tarot is reaching the bottom. When disaster follows one after another, we will first feel down then we stand up and laugh. When we see this card, we know that disaster has finally come. What you can expect now is that the situation will turn for the better.

This card also appears when you are in the same mood as the victim. You feel certain that the whole world is treating you unfairly, making your life more complicated. Can you imagine the man in the picture raising his head and saying, “You think you are unlucky and unlucky with just one broken arm? I got stabbed in the back by ten swords!” When we are harmed, we often think that everything is so bad, unfair, and hopeless.

A righteous person is another the meaning of the Ten of Swords Witches Tarot. A righteous person in this situation is not someone who is willing to make sacrifices for those with whom he is not attached. With the Ten of Swords, any situation can be fulfilled. However, making a turning point to help someone else will still be satisfying without the need for a close relationship.

Of course, there are still many real tragedies in the world. Sometimes the Ten of Swords Witches Tarot implies a sad event, but you still know when it happens. From the bottom of your heart you don’t see anything funny. But most of the time when it appears, the Ten of Swords still has a bright side as if your Inner Self just wants to joke about the way you handle personal sorrows. It may say that you should examine your attitude. Also, rest assured that you have reached the point where things will really start to get better.

IV. The Ten of Swords Witches in a Tarot spread

In traditional Tarot, the Ten of Swords Witches Tarot depicts a dead man lying on the ground with ten silver swords stabbed into his back. When you see this card in a spread, it may have many different meanings. In the superficial layer of meaning, the Ten of Swords card has a negative sense. It represents reaching the bottom and no longer looking forward, but it also has an aspect of hope. Because once things get worse, they can only get better. While the Ten of Swords generally represents a painful lesson you will receive, it also signifies an opportunity to start over cleanly. After experiencing a loss, what you do to shake things up will determine who you are. Will you let yourself drift there or will you get up and fight?

When the Tower appears together with the Ten of Swords Witches Tarot, they mean that your failure comes from your own actions rather than an outside factor. Although these two cards are not a perfect match, it also shows that can wholeheartedly rebuild everything without any further consequences. Conversely, when the Hermit appears with the Ten of Swords, this duo means that your actions and choices have a direct impact on your failure. When this pair of circumstances appears, it reminds you to accept the consequences of your actions so that you can move on. It is important that you acknowledge your shortcomings so that you can improve and grow better. When the Temperance card appears with the Ten of Swords, it means you have missed a good opportunity. Even if you cannot change the past, you can still promise yourself that you will be even more committed in the future.

Like many cards in the Swords suit, the Ten of Swords Witches Tarot brings an uncomfortable feeling, but at the same time, it does not necessarily indicate the end of the world. It is still a clear sign that you should be careful about where you place your trust. In general, when the Ten of Swords appears in relation to a question such as whether you can trust what someone tells you or believe that a certain situation will be okay, the answer is an absolute no. However, keep in mind that whenever one door closes, another opens. The message of the card is also a guide for you to move in a better direction. Believe in yourself and in the universe.

In terms of work, the appearance of the Ten of Swords Witches Tarot can mean that your troubled situation is coming to an end. It is best to try to keep things running smoothly and think through what you would do if you really lost your job for whatever reason. You may have been treated badly by someone. Don’t waste your time and energy plotting revenge. Get ready for the next phase of your life. If you are looking for a job, a potential position you are hoping for may not be within your reach. Above all, keep trying and don’t give up.

In terms of love, unfortunately, the Ten of Swords Witches Tarot is not a good sign. Something in your relationship is not quite right. Ask yourself as many questions as possible, accept reality, and don’t shut your eyes to the truth. You cannot force someone to love you or treat you with respect if they don’t want to. If you are single and just met someone new recently, keep looking and considering. It is possible that the person you have met so far is not what you think he/she is.

In terms of finances, you may be facing disappointment. This is not a time to take risks, but a time when you can consider buying stocks, and other reliable investment sources. If your financial condition is going downhill or someone you have trusted has broken his/her word, be careful not to hurt yourself. This is not the end. Try to think logically and clearly.

In terms of health, your well-being may not be as great as you had hoped. Be careful what your doctor says and what treatments you take under. Don’t hesitate to invoke the healing options you can think of, spiritual powers, the universe, ancestors, higher powers, God, or whatever you may be related to. Life is not only about things visible to the naked eye. We do know that miracles still happen every day. However, you have to make sure you are doing what needs to be done. What can you do at this time to make your health better? Consider more alternative healing methods.

In terms of spirituality, you can finally maintain a spiritual belief that you have steadfastly believed in until now. However, you must be careful with placing your trust in spiritual leaders who look out for your rights and interests. Maybe they just want to make their pockets thick. Except for that, you are breaking through with the past. This is actually a good thing, although it can be a little hurtful at the moment.

The Ten of Swords Witches Tarot in reverse implies that you may have finally reached a clear and balanced view of your life and the circumstances involved. Take one step at a time and believe in yourself. You may have passed a very difficult time and indeed the worst may be over when the reversed Ten of Swords appears. You have come up with some solutions and plans to improve your situation. That is good news. Make sure you don’t make the same mistakes again that contributed to the problem you have to deal with. Make sure you see your own role in the problem.