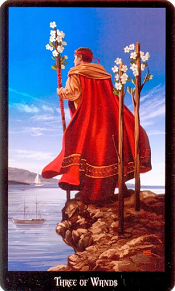 I. Keywords and corresponding associations to the Three of Wands Witches Tarot

II. Meaning of the Three of Wands Witches Tarot

A brown-haired man stands precariously on a cliff overlooking the water and the horizon. The advantage of height allows him to see the big picture. In his left hand, he holds a blooming hawthorn wand tied with a ribbon. Right behind him are two more long wands that are stuck in the ground as if for support. The young man wears a bandage around his head to keep his hair from falling over his eyes and to keep his vision of the future from being obscured. He wears an orange tunic and a dark red cloak. These warm colors are a visual connection to the element of fire, associated with the Wands.

The young man gazes out at the peaceful shore where two boats sailed in the distance as if he was waiting for his own boat to come in. Perhaps he is waiting to board one of those boats and sets off on new adventures so he can explore the unknown. He is actively observing, waiting, and letting events unfold. This is an exciting card and full of possibilities and successes to come. The clear sky and calm sea depicted in the Three of Wands Witches Tarot show that this is an optimistic card and that the future is bright.

III. Message of the Three of Wands Witches Tarot

When the Three of Wands Witches Tarot appears in a Tarot spread, it represents a time of hope. The querent may be waiting for news about a project or marriage proposal. The overall theme of this card is optimism and positive anticipation. It represents the beginning of a project and the hope that comes from planning a new career or planning a life. Remember that everything is in motion. Nothing is at rest and change is constantly happening. The Three of Wands usually represents the querent. This card can also encourage you in the direction of taking on more leadership roles at work or in groups. This is a time of expansion and growth. Be like the observer in the Three of Wands: look closely and let events happen. There is a reason to be optimistic and hopeful – the future looks bright.

With the Three of Wands Witches Tarot, we see a person standing at the top of a mountain overlooking the sea in the distance. From this height, he sees everything ahead. This is a card about vision and prediction. When we want to see further, we will have to climb higher. By going up, we increase our limits and free ourselves from the present situation. We get out of the situation and create our point of view.

The Three of Wands Witches Tarot is also a message calling you to look beyond. Don’t react hastily but step back and consider. Analyze and “apply” the current situation to the bigger picture. This card asks you to become a visionary who is always eager to conquer challenges beyond the present. It can imply premonitions or an intuitive sense of things to come.

A long-term vision is the quality of a leader which is another meaning of the Three of Wands Witches Tarot. As we look further, we gain more knowledge to guide others to the best future for them. A person who understands the way will show others to follow. As we draw the Three of Wands, know that now is the time to embrace your vision and be confident that you can lead others to pursue it.

A leader is not only a visionary but also the one who is willing to get there first, if necessary. The Three of Wands Witches Tarot is also a card of discovery. Compare this character to the Fool who also stands on a cliff. The Fool strides in innocence, not realizing that he is about to fall into his own destiny. The adventurer in the Three of Wands is also willing to stride but with complete awareness of what he is doing. His courage is more calculated and less spontaneous. The Three of Wands encourages you to venture into new realms. Let the ships on the horizon take you to uncharted territories.

IV. The Three of Wands Witches in a Tarot spread

When the Three of Wands Witches Tarot appears, you seem to be about to notice that your financial matters are getting much better. In fact, this could be the month when your luck will come. You will probably feel very strong with perfectly good reason. You may eventually experience some significant success after you have overcome the difficulties. In general, the Three of Wands is a card that points to work in an extremely positive direction. Even if you work from home, the card still means that your efforts have been recognized and appreciated. Don’t hesitate to give yourself some pride.

In traditional Tarot, the Three of Wands Witches Tarot depicts a man looking out at the sea with three wands stuck in the sand. He turns his back to the viewer and seems to be contemplating something as he stares out at the sea. The Three of Wands is a card about gradual progress in life. Although this card does not promise immediate results, it brings a happy ending to anyone who is firmly on their way. For anyone who is making a real effort to become a better person and live their own life, chances are the Three of Wands will appear in their spread.

When accompanied by a lot of cards in the Pentacles suit, the Three of Wands Witches Tarot indicates that the financial situation may improve in the future. When accompanied by many cards of the Cups suit, you can expect a different kind of wealth to appear in your life. This is a good sign that your relationships will blossom, grow, and benefit everyone involved, whether romantic or spiritual. When the Three of Wands appears with multiple Swords cards, it is important that you have to follow your dreams. Making a plan and putting that plan into practice is as different as chalk and cheese. The Swords cards now indicate that you have to put more effort into manifesting your dreams.

In terms of work, when the Three of Wands Witches Tarot appears, you have a right to be proud of being appreciated for your work, even if you have not fully seen the rewards as you would expect from this recognition. If you are looking for work, you will soon find a better position than what you are expecting. Keep your head held high and always know that you have a lot to show.

In terms of love, your relationship is fine, as long as your lover is willing to treat you equally. If not, it may be time to let go after you have explained everything clearly. If you recently met a new person, this card tells you that he or she values ​​you quite highly. And if you are looking for love but feel like you don’t have any prospects yet, you are probably spending too much time and effort on your career or work. Think about allowing yourself more time to enjoy your personal life.

In terms of finances, everything is on the rise. Your hard work is in the process of reaping the fruit even if you have not seen it yet. However, don’t be too generous with yourself on matters of money. Save a little in case of rainy days and know how to share your wealth with those who are unfortunate if possible. You can do better than you ever dreamed of.

In terms of health, any news related to your well-being tends to be very good when this card appears. Your efforts seem to be starting to bear fruit. Don’t hesitate to consider other ways to treat or address your current health challenges, rationally, of course.

In terms of spirituality, you are at least mature to some extent and have a profound spiritual vision. Even with that, you still need to realize that if you can focus fully. You will grow mentally and so your mental outlook can change and develop over time. Don’t be afraid of change and new information.

When the reversed the Three of Wands Witches Tarot appears in your spread, things generally look a lot better than you might expect in the future. Finally, you can rest or relax after a period of hard work. Allow yourself to recharge in the meantime. In general, the reversed Three of Wands can indicate a wish that is about to come true in a positive direction. Think carefully about what you really want and why you want to achieve your dream. You may find unexpected insights coming your way. Be it about yourself or about others. You can surely count on this newfound knowledge.