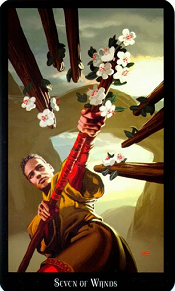 I. Keywords and corresponding associations to the Seven of Wands Witches Tarot

II. Meaning of the Seven of Wands Witches Tarot

A healthy and neatly dressed young man holding a chest-high wand. Behind him is a craggy ledge in the background which represents the unknown. However, the sky is brightening and the clouds have dispersed which is clear proof that everything is fine there. The young man is standing upright and dressed in hot colors: metallic gold, orange and red to help visually connect himself to the fire element. He attacks the other wands confidently as if enjoying the challenge. He is independent, skillful, and more than capable of handling whatever life throws at him.

This card represents adrenaline, enthusiasm, and ambition. The man in this card not only has the will to succeed but also relishes the opportunity to put his mental, physical and occult skills to the test.

III. Message of the Seven of Wands Witches Tarot

When the Seven of Wands Witches Tarot appears in a spread, it is an announcement that you are about to face a challenge that you will fully enjoy. It can be a kind of personal experiment where you take on challenges just for fun and to see how far you can improve your skills, no matter how mystical or mundane they are. This card shows muscle use and movement with restraint and style. Your enthusiasm, ambition, and wisdom will greatly assist you. The appearance of this card in the spread ensures that you will overcome all obstacles and rise up with manner, wisdom, and humor.

The Seven of Wands Witches Tarot is about standing up to fight which is a powerful act that changes the energy flow of the world for either good or for bad. Most of the time we go with the flow of life. Facts and feelings carry us forward with little effort. Even so, sometimes we are not content with being left alone. We want to resist the flow or change the whole course.

The character on the Seven of Wands Witches Tarot appears in a proud manner and is preparing for a fight. He is attacking or being attacked, probably both. When we decide to stand up against, we establish within ourselves an energy stream of resistance. When we take a strong position, others do the same. The Seven of Wands card represents enthusiasm and resistance because they are two different properties of the same thought. You attack while your opponent defends. When that person attacks back, you have to defend.

Standing up and fighting can be the right thing to do in some cases. However, question yourself because there are cases where resisting you will only cause trouble. If you are caught up in a conflict, ask yourself if it is worth fighting for. Does the reason for this conflict matter? Is it worth it? Will the results benefit you or others? If so, be brave and energetic to stand up and defend your position. Refuse to surrender! If not, consider ignoring this conflict. Be honest with yourself about this. You will be challenged to maintain your position, especially if you have invested too much time and effort into it. Don’t get dragged into a fight unless it is worth it for you to stand up and fight.

The Seven of Wands Witches Tarot can also indicate certainty. To have a strong foothold, you must believe in the position you are in and believe in yourself. You will need integrity and strength of character to see through yourself. If your cause is valid, use the energy of the Seven of Wands to make a difference.

IV. The Seven of Wands Witches in a Tarot spread

The image of a man swinging his wand against six other wands that are attacking him is depicted in the Seven of Wands Witches Tarot. Standing on a high mound, he retaliates against anyone who approaches him. His former supporters and followers now turn to attack him. This is a card about competition, conflict, challenge, and defense. Chances are there is someone who wants to replace you. You need to prove with your vision and creative drive that you deserve the position. It is also important to be wary of confrontations which when they occur can be quite intense. This card talks about actions such as pursuing what you want, attacking and clarifying your point. Be confident in yourself, be sure, and stand up for your beliefs. At the same time, it is also necessary to defend the current position, resist criticism and deal with all opponents.

When the Seven of Wands Witches Tarot appears in your spread, you will most likely find that in any competitive situation. Likewise, you will be the one to gain the advantage. Everything will go very smoothly leaving you to feel very satisfied. The projects are also on the right track. Unfortunately, you may still have moments of anxiety and self-doubt, but it is still a time for you to be a little concerned. Don’t hesitate to make your position clear to everyone. When you have clarity of thought, you will be able to support others by going into detail about their problem. This card can imply that a change is coming – and it is a positive change – in your personal or professional life. This card also shows the state of not being dependent and thinking for yourself.

The Seven of Wands Witches Tarot is about standing up for what you believe in. When paired with Justice, it indicates that you will spend a lot of time struggling. Still, the outcome of the struggle is positive. When the Seven of Wands appears with any of the Court cards in the Wands suit, it indicates that your ideas and creativity are gradually developing and becoming more valuable.

In terms of work, if you have ever wanted to advocate for yourself, now is the time to think big about this. You are qualified to create your own business. If you are determined to put in the time and effort, it will happen. However, be rational! If you can start your own business while still being able to arrange to work somewhere else, then do it sensibly.

In terms of love, if you are in a committed relationship, don’t hesitate to speak your mind to your partner. This will tighten your bond as long as you are mindful of how you express your thoughts. If you are looking for your other half, this card may mean that you are about to meet someone new far from your usual place.

In terms of finance, when the Seven of Wands Witches Tarot appears in a financial spread, you can expect growth. For example, you may receive an unexpected bonus or discover that something you own is more valuable than you thought. In the short term, your money will increase. Think about how you use and invest it in the long term.

In terms of health, you may be worrying unnecessarily about your body condition. Even in the face of serious health challenges, maintaining a positive attitude can work wonders. If you suspect that you have a physical problem, just make an appointment with your doctor. If he/she does not approve the test or diagnose the problem you suspect, see if there are other professionals who can assist you. Trust your instincts.

In terms of spirituality, by confronting your fears and turning them to your advantage, you will become stronger and ready to face the next obstacles in your journey. Indeed, there is no courage without fear, which inspires courage. That fear no longer holds you back. If an opportunity is calling you, put your worries aside and confidently take it. If you feel this is a good time to move towards and manifest your dream, forget the hesitation and don’t let anything stand in your way. In the short term, whatever your goals and expectations may be, take action to turn them into reality.

When the reversed Seven of Wands Witches Tarot appears, you may find yourself in need of protection against indecision. If you are not sure, you can choose to “take a detour”. However, remember that once you do, you will most likely be faced with comments like “you have lost your chance to hesitate”. If you want to wait for the perfect moment, chances are you will just wait forever. The reversed Seven of Wands can imply a feeling of anxiety. If you are feeling anxious, try to track down what is causing you to feel this way and what you can do to change it. Sometimes anxiety is relieved by taking action. If you need help dealing with this feeling or taking the necessary steps, don’t let your pride stop you.